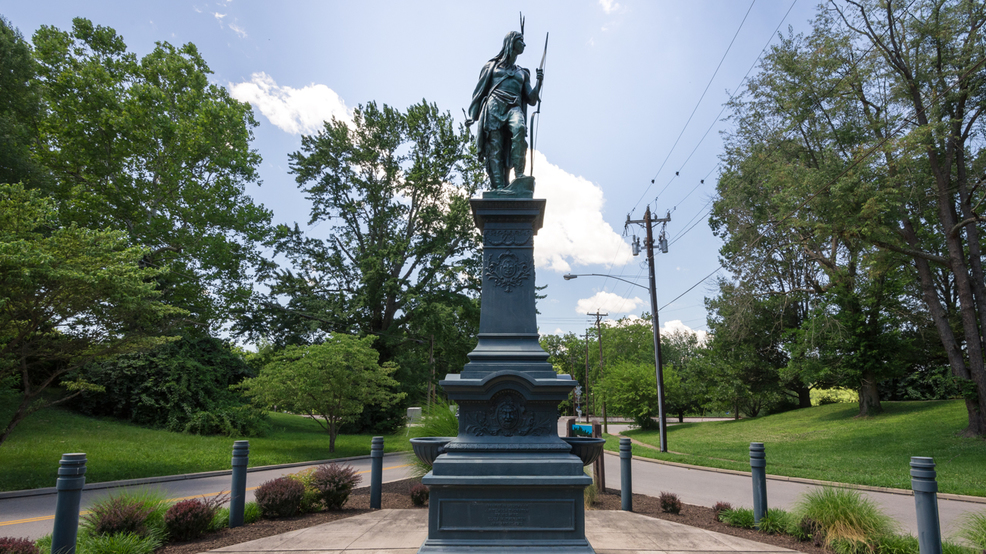 Thornton Triangle holds the distinction of being Cincinnati’s smallest official public park. A statue of Tecumseh standing over elaborately-decorated water basins rises from the middle of the landscaped triangle. It was erected in 1912 and has survived multiple instances of physical trauma over the years. It is located at the intersection of Gracely Drive and Thornton Avenue in Sayler Park. / Image: Phil Armstrong, Cincinnati Refined // Published: 6.27.17
SEE MORE

In October of 1813, Ohio-born and Native American folk hero, Tecumseh, was felled during the Battle of the Thames, and his following was forced to retreat westward as Americans bloodied the path into what is now the Midwest. He was posthumously given recognition for his bravery during a doomed crusade and subsequently became a modern martyr.

Okay, not really in his honor. The statue was dedicated to J. Fitzhugh Thornton by his widow, Eliza. Thornton was a prominent farmer in the area and the statue symbolized the Native Americans who’d previously settled the area... or something.

Fast forward another hundred years, and the statue still stands atop a pedestal in a (roughly) 60-foot triangular island at the intersection of Gracely Drive and Thornton Avenue. Shirking the responsibilities of a roundabout and devoid of the scale of a common esplanade, the statue and surrounding landscaping is officially known as Thornton Triangle, Cincinnati’s smallest public park.

But while it holds the unintentionally adorable achievement for littlest park in Cincinnati, its story isn’t merely relegated to just being a certified tiny triangle bullseye’d with a 100-year-old statue.

SCRAPPY SAYLERS SAVE A SCULPTURE

You already know the statue was erected in 1912 for good old farmer Thornton, but digging through the archive of a prominent 175-year-old local newspaper yields an endearing story about the time a driver almost ruined it for everyone.

In December of 1940, a car ran into the statue and the Native American toppled from his base. The damage was extensive and the park board tossed old Tecumseh on a scrap heap. In the era of WWII, that zinc/aluminum/copper mixture looked like a money-maker, and an antique dealer from Aurora, Indiana ponied up a staggering ten bucks to take him home.

Long story short, local residents loved their “Fernbank Indian” something fierce and were incensed to find out he’d been sold off. They set out to get him back. After a restoration, the community purchased and returned Tecumseh to his pedestal. A monument to the park board’s egg on its face was never constructed.