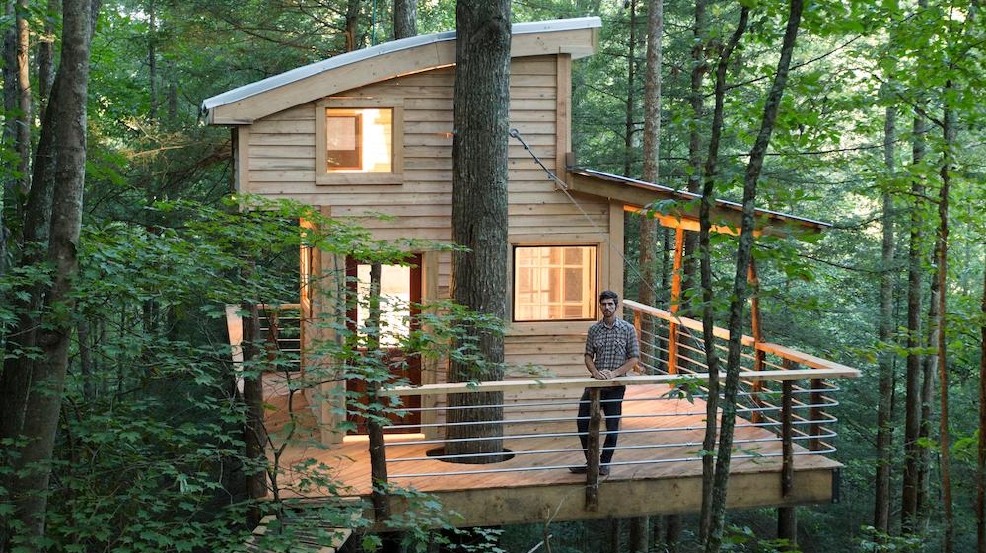 What’s the one thing we all wanted as children? Think really hard for a minute. I know you’ve got this.

Figure it out yet? If you answered a baller treehouse in your backyard, then yes, we are on the same page here. A treehouse symbolizes a place of freedom and liberation. It’s an escape into nature (i.e. the best kind of escape).

So that’s why, when we heard about The Canopy Crew, we had to share the news with you guys. The Canopy Crew is a 10-person treehouse-building team founded by Django Kroner in 2013. Although, let the record state, Kroner built his first treehouse in 2009.

Red River Gorge is the home base of operations for the company, but they also have a tree care division which operates out of Cincinnati. The Gorge is what inspired Kroner to start the business. “When I spent three years in the tree tops there, it really showed me a new perspective on the forest below. It’s a very intimate way to experience nature,” explained Kroner. “And if people don’t get out into nature, they will never learn to love it and, in return, feel the need to protect it.”

So the Canopy Crew was born. Since its inception, they’ve created 18 treehouses. They also have two rentals that anyone can experience in The Gorge.

The Sylvan Float: It's a cozy, heated house built for two. It's located in the main geological area, about five minutes from the grey's arch trailhead.

The Observatory: You have to hike over 200 steps to get into this transcendent home, but it'll be so worth it once you're there. The glass bedrooms sit 50 feet above the Gorge's floor and includes a high-powered telescope.

**Note: You can find out more info about the rentals on their website. We've included the link at the end of the article.

Now, when it comes to building a treehouse, the design is what counts. “Trees grow and move, so we build systems that allow the tree to do what it wants,” said Kroner. Sure, that makes sense. But not everyone gets it. If you don’t take into account the movement of the tree, you’ll either kill the tree or it’ll kill your treehouse, neither of which are results you want to see happen. “But if it’s done perfectly, the trees keep growing and the house stays up until the tree sees the end of its life [naturally],” Kroner elaborated.

The smallest house the team has built is only 30 square feet. The biggest well, it was 600 square feet, and it was a full-on house, with electricity, plumbing, a spacious kitchen, and even a claw-foot tub.

Are your childhood fantasies coming back to life? I’d imagine so. And nobody sums up the magic of treehouse-living better than the creator himself: “There is something truly spectacular about having a home in a living being. We don’t have to live in a stale box; we have plenty of options to enhance that feeling of being alive.”

I’m sold. Now I just need to find a yard with some trees.

If you are also sold (or just want to learn more), hit up The Canopy Crew’s website.

Be sure to scroll back to the top and check out the gallery. Images were taken by Pete McDermott, John Wesley, and Django Kroner.