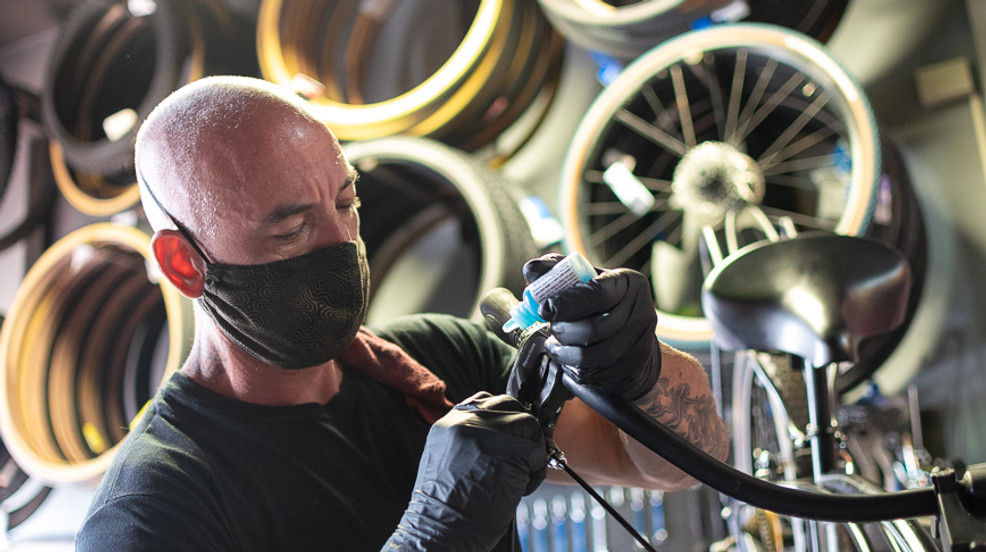 If you've ever had the pleasure of having your bike repaired at Spun Bicycles in Northside, you already understand why it's so beloved. It's the quality of service you receive when you step through its dark purple doorway that hangs with you long after you hit the road, presumably on a bike that rides better than the day you originally bought it. And that's by design.

As the owners of Northside's (dare I say) legendary bicycle shop, Dominic and Judi LoPresti have been working overtime the last several months to put as many bikes back on Cincy streets as they can.

According to Judi, requests for repairs since mid-March have skyrocketed due to the ongoing pandemic. Because gyms are closed, and indoor activities aren't what they were pre-COVID, people are taking to the streets to get a little fresh air and exercise. As a result, there's currently a bicycle shortage, and Cincinnatians are dusting off the bikes in their basements and bringing them to Spun to get what Dominic cheekily refers to as "resurrection tune-ups."

Repairs currently account for 60-70% of Spun's business since mid-March—a massive increase, according to Judi. Dominic's the only full-time mechanic in the shop, and his workload has easily doubled since the onset of the quarantine.

"My job has become getting people their bikes," Dominic said. "I have so many people relying on their bikes not just for exercise, but for mental health, you know."

Though it's been tough on both of them, Dominic and Judi have adapted to the way commerce has changed since the beginning of the outbreak. Safety is their utmost priority, and until people feel safe, they're only permitting a few people in the shop at a time, doing bike drop-offs outdoors, and asking customers to follow their lead and wear a mask. Every bike is properly sanitized when it comes into the shop and before it leaves.

Dominic is doing the work of four to five people at the moment, and Judi is doing the work of at least two people to keep the shop stocked with all the necessary supplies and invoices processed. They've stocked up on bike chains, tubes, and other parts to ensure they have everything they need for repairs. They can't employ their regular contract mechanic as often because the shop's repair station isn't conducive to social distancing. Working on their own, in May, they filed 113 repair jobs without even counting the simple fixes they do, such as fixing a quick brake cable or replacing a tube. Those quick fixes are unpredictable and unscheduled but have successfully gotten cyclists back out onto the street.

"We can only do that depending on what we have going on at that moment," Judi said. She described a situation where a rider's front brake was replaced on a whim outside the shop because he caught them at just the right moment.

"With everything going down in the country right now, people need their bicycles, and I feel like we just have to be here. We can't let anyone down," said Dominic.

Despite the influx of repair requests and the long hours along with the lack of additional help, they're not sacrificing the quality of their work. According to Dominic, they can only control what happens in their shop, and perfect repairs are their focus.

I can personally vouch for that last statement. In April, I took my own bike in for one of Dominic's "resurrection tune-ups." With masks on, Judi and I briefly met outside the shop, I dropped off my bike, and a week later, I had a bike that I never dreamed would ride as well as it does now. Since getting it back, I've had it out every week without a single issue.

THE EASIEST WAY TO HELP

Whatever cash tips they get, Judi says they sanitize the bills and contribute to charitable causes or community fundraisers. When asked how a past, present, or future customer can help their small business outside of cash tips, she was very straightforward: referrals.

Find Spun on Google and write them a review with five stars. When someone searches for bike repairs in Cincinnati, those reviews help refer new customers to their shop. With as hard as they worked on my own bike, it was the least I could do to show my gratitude.

If you've ever had your bike repaired at Spun, you should also leave them a glowing review. They deserve it.