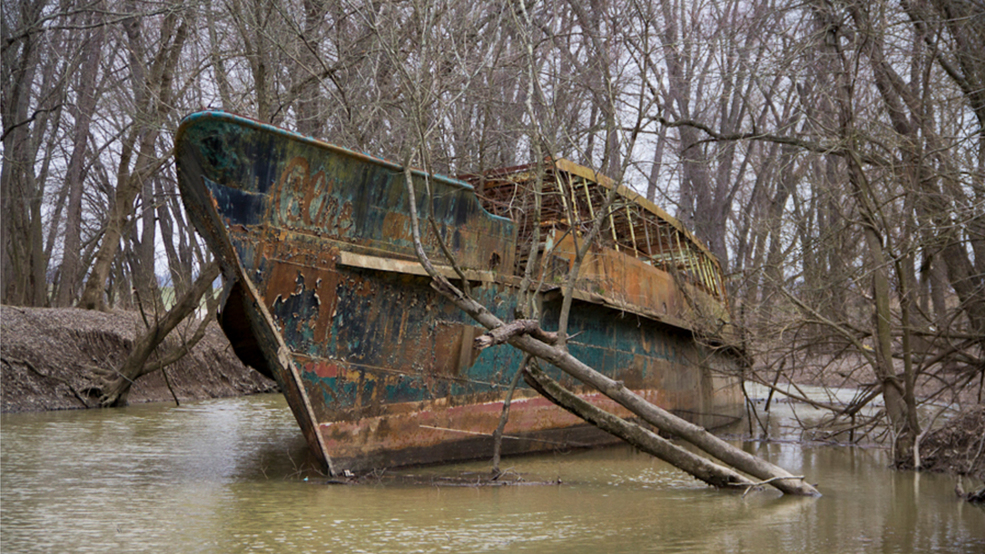 The Circle Line V was a ship that first launched in 1902, served numerous purposes, and subsequently came to rest on the banks of the Ohio River years later. For decades, the ship has been rusting beneath a canopy of trees, attracting visitors who want to see and photograph the hulking, metal boat. The ship sits on private property. / Image courtesy of Ronny Salerno and Queen City Discovery // Published: 8.4.18
SEE MORE

Peering through the overgrowth, you see her—a large, ominous ghost ship sitting along the shore of the Ohio River. Covered in rust, you can barely make out the words “C Line” etched into its bluish-green hull; a title that alludes to one of its many former lives.

It's known as the Circle Line V. Originally launched in Delaware in 1902, the now-retired ship rests in a tributary of Kentucky today.

Photographed by Cincinnati-based urban explorer Ronny Salerno, the Circle Line V's over-100-year-old history was documented on his popular website, Queen City Discovery, in March of 2013. There, he tells the tale of where the ship came from and what it did when it was still a sea-faring vessel.

According to Salerno's article, “It's a vessel that fought in two World Wars, served as a yacht, set the scene in a pop star's music video, carried one of the world's greatest minds, and shuttled tourists around the nation's largest city–all before it found itself left to be forgotten by time and history in the murky waters.”

The Circle Line V may be old, but it isn’t old news. Instagram users regularly trespass to snap pics of the stranded, aging ship. Their photos highlight changes in the past five years when you compare them to Ronny's from 2013.

It stands to be repeated: the Circle Line V is on private property and, as such, we do not condone trespassing on the property to see it for yourself. Let the gallery of photos above satisfy your curiosity instead.

Read more about the ghost ship on Queen City Discovery.