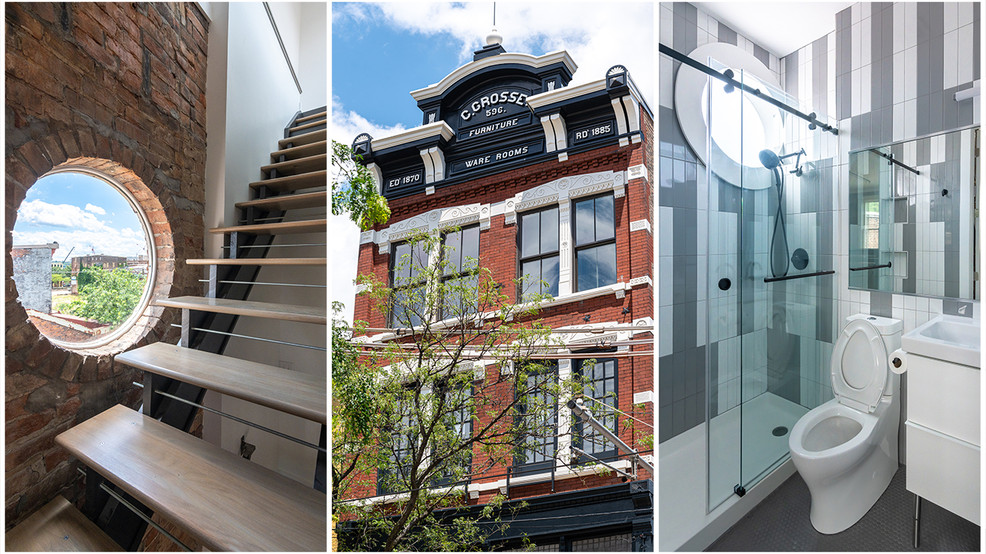 The next time you head to Findlay Market, take a spin around the block to 1710 Elm Street. From the street, you'll see offices for Urban Fast Forward—a consulting and real estate firm focused on urban development—under the shade of a tall tree. To the right of their plate glass window is a bright red door. While just anyone can't open that red door, what lies beyond it is notable.

1710 Elm Street, in addition to street-level commercial space, holds three residences behind that red door: one flat on the second floor and two lofts that comprise the third and fourth floors, each with open-air rooftop decks.

Denise Savas and Martin Wilz purchased the building in 2017. When they bought it, the building was in bad shape; it had suffered a particularly destructive fire, burning away 25% of the rear of the building and all of the stairs. What remained was a charred, four-story shell that needed a tremendous amount of work. Savas and Wilz didn't shy away from the challenge, though, and hired architect Mark Gunther to help them re-envision how the building could live on with its intact facade and remaining architectural details.

Gunther's blueprints laid out the first-floor commercial space where Urban Fast Forward lives today as well as three residential units that comprise floors two through four. He saw an opportunity to create outdoor space on the roof and off the back, and included that into his plans. Savas and Wilz hired Bill and Otto Baum as the general contractors to bring to reality Gunther's design. After three years of work, 1710 Elm Street may have the same general outline from the street as it did before, but with a much shinier interior.

The couple named the renovated building The Wareroom Condos after the furniture wareroom and factory that once occupied the building.

There are three residences in the building, two of which are available to rent at the time of this writing. Each come with kitchens packed with Frigidaire appliances, European-style high-gloss laminated cabinetry, and quartz countertops. They also already have Electrolux washers and dryers installed in-unit, and all feature their own private outdoor space. A parking pad with two spaces off the back of the building is reservable for tenants.

The Findlay Flat is on the second floor. It's a one-bedroom, one-bathroom apartment overlooking Elm Street by way of large windows set with restored 1890s Luxfer glass prism tiles at the top of each one. The brick was restored and exposed, and a private 14'x22' deck is accessible from the bedroom. It's available for $1,825 a month.

The Steeple Loft, named for the steeple prominently featured in the distance outside its windows, faces east. It occupies floors three and four and is topped with an open-air 12'x16' rooftop deck. Large windows flank the side of the apartment, drawing in loads of natural light from the street. It's available for $1,825 a month.

The FC Loft, named for its view of the FC Cincinnati stadium that's being built in the West End, faces west. It's nearly a mirror image of the Steeple Loft and is already rented at the time of this writing.

If you're interested in renting either the Steeple Loft (which you can see here) or the Findlay Flat (photos here), email Molly Mouch.

>> TAKE A VISUAL TOUR OF ALL THREE APARTMENTS HERE <<