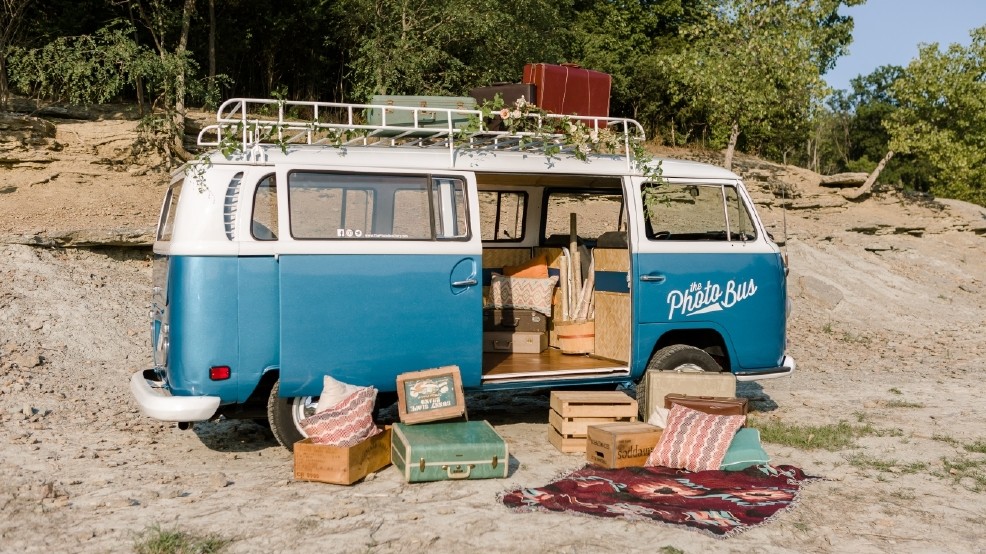 The Photo Bus Cincy is a 1970 VW Transporter renovated into a unique photo booth for weddings, proms, and any corporate or private events. Friends and family climb in, grab props, and have a blast while having their photo taken in a totally new setting. / Images courtesy of Kaleigh Turner Photography // Published: 12.20.16
SEE MORE

This 1970 VW Transporter Was Transformed Into A Traveling Photo Booth

If you’ve been to a wedding in the past five years, chances are you’ve hammed it up for a photo booth camera (possibly even at the urging of some liquid courage). But instead of the typical cubicle/drape setup most photo booths are in, what if you had the chance to ham it up on the wheels of a quirky, blue 1970 Volkswagen Transporter instead?

Pretty good idea, right? Luckily, The Photo Bus Cincy took that idea and ran (or should I say drove) with it.

The geniuses behind The Photo Bus Cincy are sisters Heather Pinto and Lyndsay James. They each had their weddings photographed by John DePrisco, who started The Photo Bus Company in Kansas City. After staying in touch through the following years, the sisters, along with Lyndsay’s husband Aaron, decided to bring DePrisco’s bus brainchild to the Queen City.

The Photo Bus Cincy has been up and running since January and is already dreaming of adding a second vehicle to its fleet.

First things first, though, they are nearing completion of a stationary booth that compliments the VW’s vibe, which will accommodate events that couldn’t otherwise house the rad ride.

Proms. After proms. Corporate events. Heck, they’ll even hang out at your holiday cookie baking extravaganza. Wherever there are memories to be made, The Photo Bus Cincy team wants to be the folks who preserve them.

BUT I'M NOT A MILLENNIAL...

You’re never too old to get your picture taken. In fact, some of the best stories the folks behind the bus have come from patrons who lived the experience back in the day. Even the little ones aren’t able to contain themselves when they see “Betty” roll up to the party.

And that’s the best part for the crew: stories they hear from the people they meet.

Are you ready to take your event photos to the next level? Then make sure you invite Betty, The Photo Bus Cincy Volkswagen.