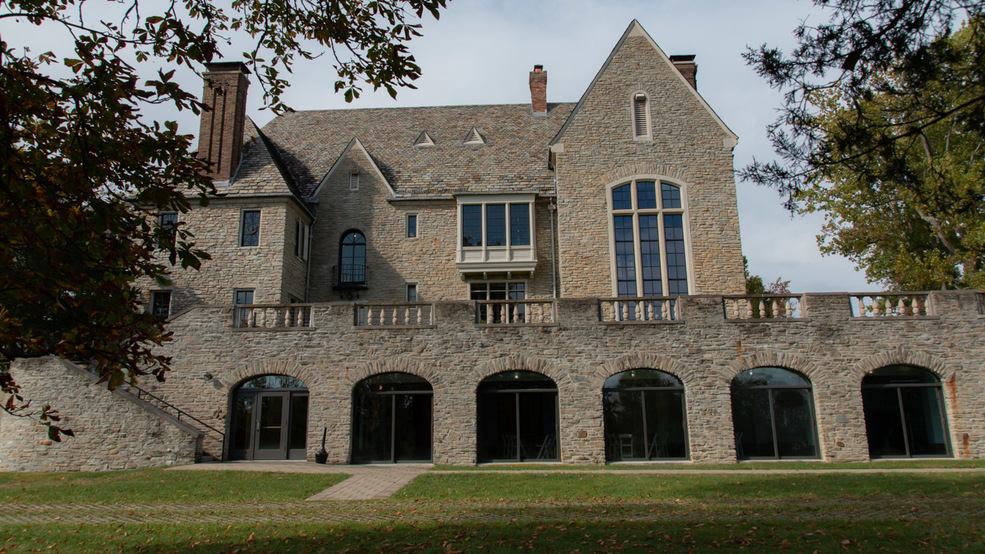 Although the Greenacres Artists Guild is members-only, the public has the opportunity to purchase pieces created by Guild artists at the event. Membership to the guild is managed by the artists themselves and is graded by certain criteria. Being local to the Cincinnati region is an example of one of the requirements to join. / Image: Elizabeth Lowry // Published: 11.4.19
SEE MORE

Cincinnati is nothing if not full of history. Tales of historic buildings and entire neighborhoods rising from the ashes can be frequently heard around these parts. And it's not just our downtown area either; many historic landmarks, houses, and entire suburban estates changed hands across generations, from old to new, from disrepair to destination.

The Greenacres Arts Center in Indian Hill is one such figurative phoenix. From its hunting ground beginnings to its current use as an arts and events center, the main house and its land have been painstakingly preserved so that future generations may enjoy this piece of Cincinnati history.

The Greenacres Arts Center is a part of the Greenacres Foundation, a network of several parcels of land and structures that stretches across nearly 600 acres and consists of a rentable event space, educational buildings used for field trips and summer camps, special public events, an equine center, research facilities, and a farm store.

The Arts Center itself was purchased and restored in 1998 by the Nippert Charitable Foundation as a venue for the organization to teach arts-focused field trips explains Peter Wheeler, the marketing manager of Greenacres.

The center hosts thousands of students a year, private events like weddings, galas, and fundraisers, as well as mission-related events such as Music Under the Stars, the Celebration Concert, the Artists Guild Show, and farm-to-table dinners.

The property was built by Julius Fleischmann (yes, of Fleischmann’s Yeast fame) in 1924 for the purpose of the elite esteem that came with country living and also to provide support for the then-popular sport of foxhunting. Julius named the property Winding Creek Farm and donated a pack of foxhounds to the Camargo Hunt. To further enable the sport, he also had kennels, stables, and a huntsman's cottage built on his property.

Winding Creek continued to be used through the 50s as a sporting and cultural activity center for foxhunting and other equine-related events as well as farming.

The estate fell into disrepair after Fleischmann's death in 1968, eventually becoming vacant. It took seven years for the Greenacres Foundation to complete repairs after its purchase, as the entire estate (stables, greenhouse, and all) underwent a full restoration to preserve the original building and its architecture.

Among the annual events held at the Arts Center is the Greenacres Artists Guild Art Show. The show is one of the few times a year the center is open to the public with gallery hours. Past themes have included the likes of Cincinnati Masters: Old and New, which featured paintings from the Nipperts' private collection as well as new works completed by Artists Guild members.

Founded in 2011, the Guild's purpose is to bring local artists together to encourage the highest standards of classical art in Cincinnati and to stimulate discussion and education for the benefit of artists, students, and the community. "The show was a chance for the members to showcase their work and give the public another chance to explore arts and the arts center," Wheeler says.

The Nipperts were very supportive of art and artists from the region. For example, Louis Nippert helped save the murals from Union Terminal and Louise left a major endowment for CSO, Ballet, Opera, and May Festival in the form of the Louise Dieterle Musical Arts Fund.

The Greenacres Arts Center is located at 8400 Blome Road (45243). Visit their site to learn more information on the 2019 Artists Guild show.