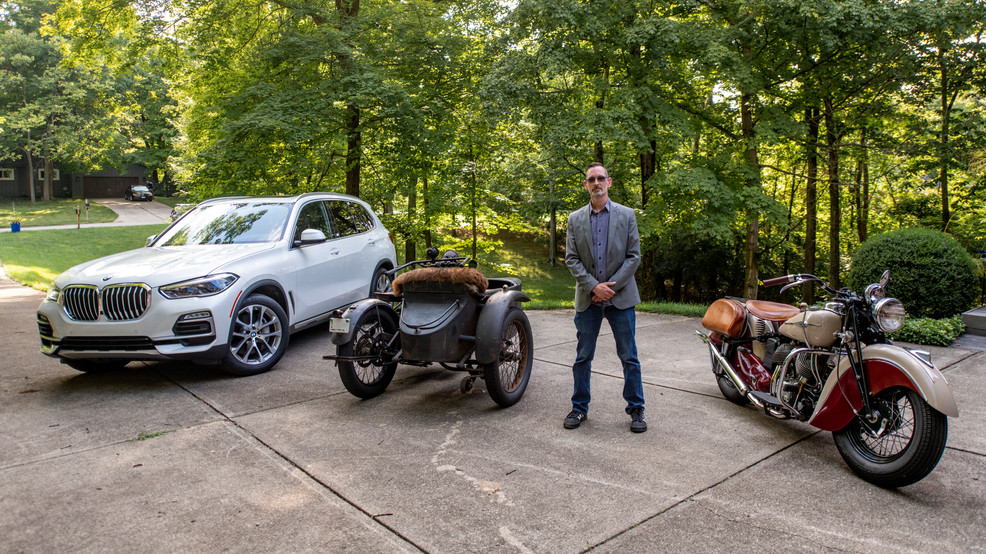 A shared passion for vintage bikes and automobiles

In partnership with The BMW Store where "Passion Loves Company," we asked readers to tell us about their passion projects. We're selecting one person a month to receive an exclusive experience to give their passion some company. Click here to nominate yourself or a friend.

Rocky Corsmeier fell in love with motorcycles when his dad first took him on a ride when he was five. He's been obsessed with everything motorized on two wheels ever since.

After meeting his wife 22 years ago, they've been growing their passion for, and collection of, motorcycles together.

"His passion was contagious," she says, "This of course has led us to own several, with the oldest one we have ever owned being from 1912."

"This has been a lot of fun getting together with many other enthusiasts including British, Italian, German and Japanese motorcycles," Rocky says. "There's a tremendous mechanical knowledge and a love by all for two-wheel machines."

There are a lot of motorcycle riders in Greater Cincinnati and Dayton, Ohio, Rocky adds. "It’s a small world and creates the opportunity for wonderful socialization. Collecting old machines is a labor of love and to most a pile of junk until new life is breathed into them. We enjoy sharing our passion."

The Corsmeiers recently gave fellow motorcycle enthusiast, Chris Reagan, a private tour of their collection as an exclusive experience in our "Passion Loves Company" story series.

Reagan grew up on the West Side of Cincinnati with a similar childhood love for cars and bikes.

He taught himself how to drive a manual transmission at 15 in his dad's '99 Miata, and at 16, he embarked on a career of being an auto technician. But soon after, he broke his back in a car accident, and could no longer lean over car fenders for a living.

"So, I went to Motorcycle Mechanics Institute in Orlando, met a girl, moved to Nashville, and started working at custom Harley shops," he says. "I became infatuated with racing motorcycles and cars."

He built a two 1970s Yamaha two-stroke race bikes, went to vintage motorcycle festivals, and even went to the Isle of Mann TT races in 2017.

"Then, I got news my father was having a quadruple bypass and mom was having some issues so I moved back to Cincinnati in 2019," he says. "Now, I repair commercial equipment. It pays well and leaves my hobby as just a hobby. Working on a motorcycle or a car previously was a job, now it's for fun."

Speaking of fun, Reagan had a lot of it as he toured the Corsmeier's collection and even got to take a ride in their 1924 Henderson Deluxe Goulding Sidecar.

"It was an absolute delight to experience the quality of this collection.” Reagan says. "I could tell right away the absolute passion they share together, and that’s what having a passion is all about. You can be one of two people in the world that are passionate about a very specific unique thing. As long as both of those people have each other to share their passion with, then they're happy.”

Reagan currently amateur races a modern MINI Cooper S, and has plans to build a BMW M Track Days car soon. He says this private collection tour and getting to meet the Corsmeiers was a highlight in his life-long passion for all things pistons and pit stops. "There's this very real human connection to cars and bikes," he says. "I like that BMW seems to embody that passion and connection."

Want to be our next Passion Loves Company experience recipient? Click here.