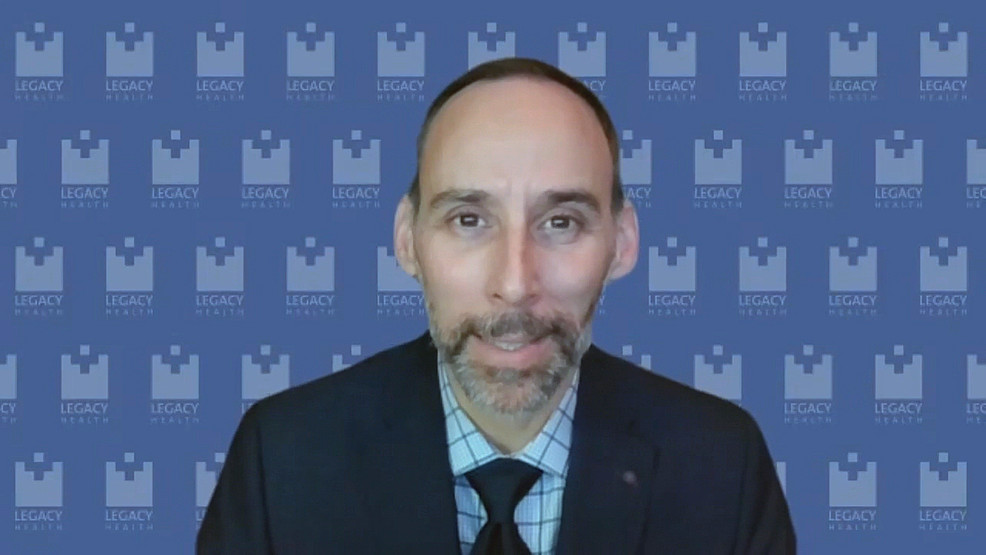 The chief medical officer at Legacy Health is urging Oregonians to mask up and stay socially distant, as well as get vaccinated and boosted.

Dr. Seth Podolsky, who is also the senior vice president for Legacy Health, says his workers are burned out, exhausted and "frankly, I think, moving into the upset phase because we know what we can do to prevent the spread and these surges and we don’t see all of our fellow Americans doing it.”

Podolsky stepped into the CMO role just five months ago, nearly the same time as the delta surge of COVID-19. He's now leading Legacy Health during the omicron spike.

"We have lost more than 800,000 Americans since this started. 800,000 Americans," Dr. Podolsky said. "We’ve got a new variant that has already taken over the number of cases that we saw with the last variant, and it’s coming faster."

Podolsky says delta took about four months to grow from 5% of cases in the United States to 95%. "Omicron is doing that in less than four weeks," Podolsky said.

According to the CDC, omicron now accounts for more than 70% of cases in the United States and, according to data from delta, the unvaccinated are 20% more likely to die from COVID than the vaccinated and boosted.

On Dec. 17, the Oregon Health Authority set a goal of getting a million more Oregonians vaccinated by the end of January. On Thursday, OHA said just over 118,000 had answered the call.

When asked what the biggest challenge will be in hitting the one million mark, Podolsky said, "I think it all comes down to patriotism, right? Those that believe we can save our neighbors and friends by getting vaccinated and boosted will get it.”

On Wednesday, the World Health Organization said the booster effort in the United States will hurt the global effort to end the pandemic.

“Blanket booster programs are likely to prolong the pandemic, rather than ending it, by diverting supply to countries that already have high levels of vaccination coverage, giving the virus more opportunity to spread and mutate,” Tedros Adhanom Ghebreyesus, WHO's director-general, said.

Ken Stedman, a biology professor at Portland State University says, from what he's seen, it's not a vaccine supply issue globally but rather a distribution and logistical challenge.

"Whether the problem is is that everybody's being boosted here, I think that’s more of an open question, and I think that there are other things that have to happen as well, not just the providing of doses," Stedman said.

Podolsky says those who are not getting vaccinated because they personally don't have concerns about the virus are putting others in the community at risk.