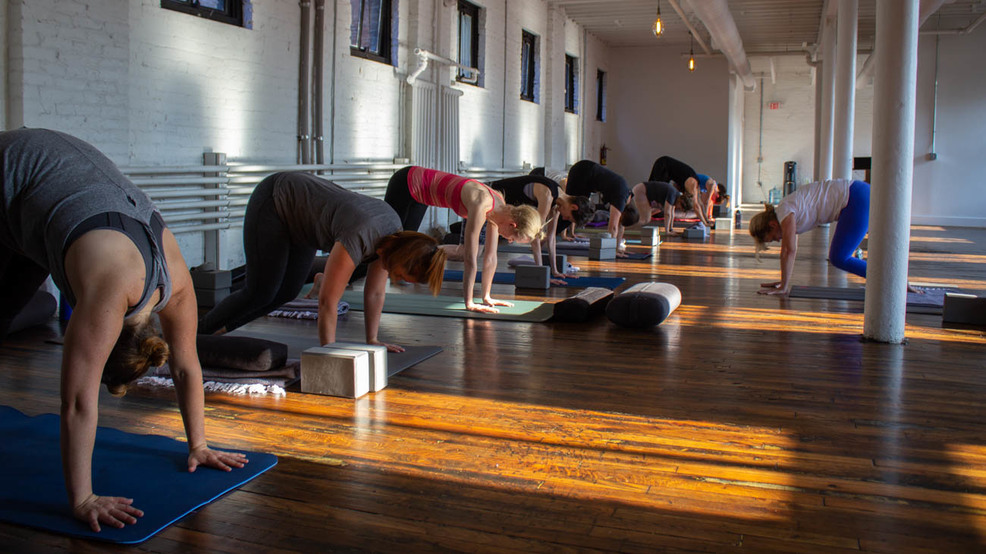 The couple has gathered some of the city’s most soulful yogis to offer 30 eclectic classes every week. Be on the lookout for even more classes added to the schedule as they work toward their goal of serving the OTR community through workshops, musical collaborations, and specialty offerings. In the meantime, Findlay Yoga will lead a class at Ziegler park at 9am every Sunday in October. / Image: Katie Robinson, Cincinnati Refined // Published: 9.30.19
SEE MORE

Findlay Yoga, located a block away from Findlay Market, is a full-body experience that incorporates ancient yogic philosophy and many forms of healing in their group yoga classes. From powerful Ashtanga Vinyasa Yoga to restorative Urban Zen, Findlay Yoga has it all.

To get into the studio, I rang their doorbell, which instantly gave me a friendly neighborhood vibe. I was welcomed by high-school-sweethearts-turned-studio-owners, Matt Ionna and Lara Rice.

The space was once used as a bakery and ice creamery, so it initially wasn’t in group-yoga-class condition. The floors were unusable and the electricity was essentially nonexistent. But Lara, Matt, and the Findlay Yoga community brought the light.

As Matt and Lara walked me along their “perfectly imperfect floors," Matt noted, “it’s kind of like who we are and where we came from.”

Matt found yoga after a series of traumatic events throughout the 90s, including five back surgeries and subsequent decades of addiction.

“I’ve really grown through those trials and tribulations,” Matt said. “Yoga has taught me that I can’t always change the pain, but I can change the perspective.”

“It was miraculous to see him go from laying on the floor doing nothing to—six months later—he’s touching his toes,” Lara added. “We live yoga moment to moment. If I can take a breath and pause, I know it’s going to be okay.”

After the incredible impact it had on them, the couple completed a yoga teacher training program with Jeff Emerson, who led the True Freedom Recovery Yoga Program where Matt practiced. Though they both sought to solely deepen their individual practices, they were soon approached by Platte Architecture and Design to bring yoga to the OTR community.

“But everywhere we went, people said, ‘if it’s not you, then who?’ We realized that the biggest thing for us to do is to pass along what we’ve received," Matt said. "We can make these minor shifts in the world to cumulatively make it better.”

The couple gathered some of the city’s most soulful yogis to offer 30 eclectic classes every week. You can learn more about their diverse offerings and reserve your spot in a class by visiting their website linked below.

Be on the lookout for even more classes added to the schedule as they work toward their goal of serving the OTR community through workshops, musical collaborations, and specialty offerings. I’m most excited for their upcoming donation-based class called, “The Attitude of Gratitude,” on Thanksgiving.

In the meantime, Findlay Yoga will lead a class at Ziegler park at 9 AM every Sunday in October.

Findlay Yoga is located at 1810 Campbell Alley, Suite 200 (45202). You can follow them on Facebook to keep up with their upcoming events and classes.