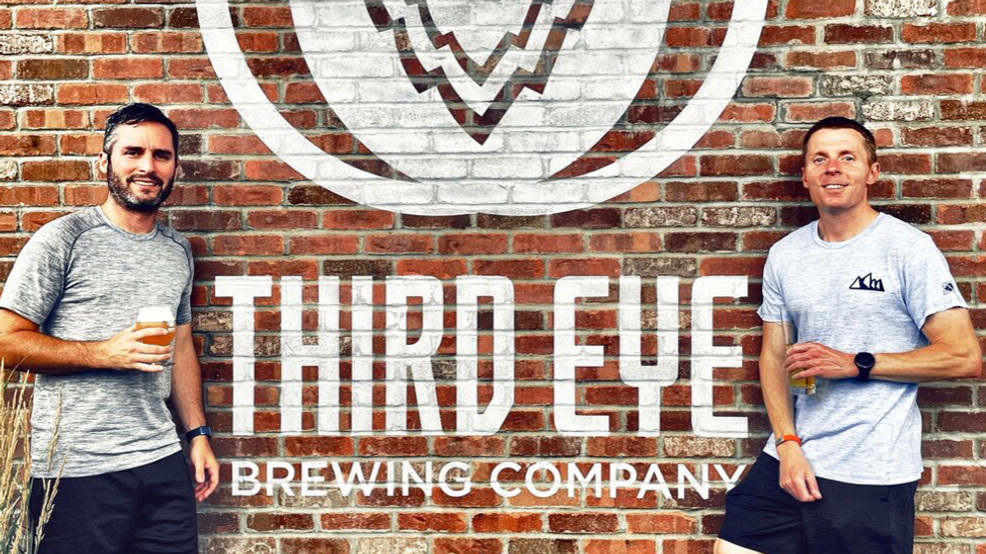 Meet the BrewRunners of Cincinnati. A group of self-described misfits that mix a unique blend of Cincinnati passion, distance running of all levels, and appreciation for local craft beer. Do we have your attention yet?

Maybe you’re thinking this sounds familiar, and I get it. Brewery running clubs are a thing (we really don’t know why drinking and running were ever mixed in the first place). In fact, there are a handful all over Cincinnati offering various benefits to buy your loyalty. Truth be told, I’m actually a West Side (Best Side ????) Run Club member, and I love being a part of the community.

I don’t know if anyone exactly knows why, but there seems to be a unique bond between both bar/brewery culture and strangely enough, running buddies. The Cincy by the Pint staff Scientists (aka me and my friends) are still crunching the lab data but our hunch is the social aspect of both communities combine for the perfect storm of camaraderie. Maybe that’s what makes the BrewRunners of Cincinnati so special, they offer up a unique mash-up of acceptance for all and passion for great local beer. This is what hooked me.

Enter the BrewRunners of Cincy

I had caught wind of their Instagram account many months ago and would follow along casually. Since Cincy by the Pint had taken on a life of its own, my running game had gone down hill quite a bit. COVID-19 didn’t help the situation either, but that’s another story. I casually followed along as these guys seemed to be doing it all and having all the fun. My problem with most running clubs? Glad you asked:

Being a pretty significant beer lover with an emphasis on local Cincinnati craft, and a knack for running- destiny came a knocking. I eventually took the plunge and met up with the Cincy BrewRunners for an open-to-anyone fun run at Third Eye Brewing, which happens to be one of my favorite places. Some things are meant to be right?

What happened next changed everything. I met Matt, Ryan, and a handful of other amazing people that day. I’d mention more names but the Third Eye Brewing Triple IPA Trippin’ got the best of my memory that night. It was a smaller group for their typical fun runs which I was told typically includes anywhere from 10-50 people depending on day, time, and location. That’s the best part though, it’s casual, it’s fun, and it’s super welcoming for outsiders; AKA me. Even though we’re pretty well situated in the Cincinnati brewery scene, these guys were the real deal. Ranging from hobbiest runners, former athletes, marathon runners- there was a bizarre mix of skill-levels and I admit it was a bit intimidating at first. Until we began.

On a day where it was roughly 95 degrees, the humidity factor in the millions, and may I add I had just worked from 8-5; I slapped on my running shoes at 6:00 and met these random strangers at 6:30. I felt like a regular immediately, everyone was super friendly and two routes were offered: the 3 and 5 mile option from Third Eye Brewing through Glendale and back. Most of us choose the 3 mile option since the weather was turning quick. Even though half way through we had a brief downpour, I don’t think anyone complained the entire time. The best part? All skill levels and age ranges from all walks of life showed up and turned on the jets that day. In the end, everyone was cheering each other on and embracing the strange hand we were dealt that day with the weather.

Spoiler alert: I made it. Busting out 3 miles isn’t too insane for me, even with a craft sweet-tooth, but I have to admit I turned it up a bit to desperately prove my worth. I posted roughly a mid 8’ mile, and honestly I’ll take it at almost 35 with a craft problem. The best part came next: the social hour afterwards. Honestly if you’re on the fence about attending a fun run, walk, jog, pamerwalk, or run-jog; it really doesn't matter how you cross the finish line. Because at the end theres a cold beer waiting for you, and a handful of friendly faces that have since quickly become friends.

The BrewRunners of Cincinnati are working towards a goal, in fact it’s an entire training season. But don’t let that discourage you.

The fall training program is about to kick off on July 24th and signups are live now via EventBrite which includes all of the following for a measly $70. The deal of the century if you’re familiar with most running/training clubs, and get this.. there’s beers involved. ??

Definitely: The best valued run club around including some of the coolest, like minded, and brewery focused members in the game.

Most likely: Something you’re going to want to get in on soon. You have until July 24th to get in on the Fall training season. This is where the “training” begins, and we use that word lightly as once again; all skill levels and even walk/joggers are admitted to be part of the community.

DO NOT: Feel like you’re not cut out for this fun group. The rallying cry of the BrewRunners is the belief that both running and enjoying local craft beer go hand in hand! When combined? Both experiences are elevated when done in a fun social setting. The training program emphasizes socializing with your fellow runners (and local breweries) just as much (or less) as the running!

Follow along on Instagram and Facebook, and get exercise the best way possible: while drinking. Not to mention we’ll be running along with the pack, just don’t judge us okay?

More about the Brew Runners of Cincinnati

Established January 2021, Matt and Ryan met in 2018 at DogBerry Brewing in West Chester. At the time, Matt was working for JackRabbit at their Glendale location and was holding fun runs at DogBerry on Wednesday nights. Ryan had just moved back to Cincinnati, lived nearby, and went to check it out. They quickly became friends over their shared love for running and craft beer. In 2019, Matt and JackRabbit partnered with 50 West to start a training program and Ryan joined as a pace coach. They did 4 training programs together between 2019 and 2020. Then in 2021, Matt and Ryan decided to start their own running group but with a twist.

The BrewRunners believe running and enjoying local craft beer go hand in hand! Furthermore, the belief both those experiences are elevated when done in a group setting. They should be communal and inclusive. The training program emphasizes socializing with your fellow runners (and local breweries) just as much as the running!

What makes the BrewRunners different?

One, a welcoming atmosphere to all skill levels of runners, never intimidating to someone just starting their running journey.

Two, the training program exposes runners to the amazing craft beer scene that Cincinnati has to offer by running from different breweries/craft beer locations throughout the city. This also means routes vary every week and runners get to see areas of the city they might not have seen before.

Participating Breweries for the Fall ‘21 Season

Use the code PINT for $5 off Cincy Brew Runners registration (ends July 24). Click here to register!