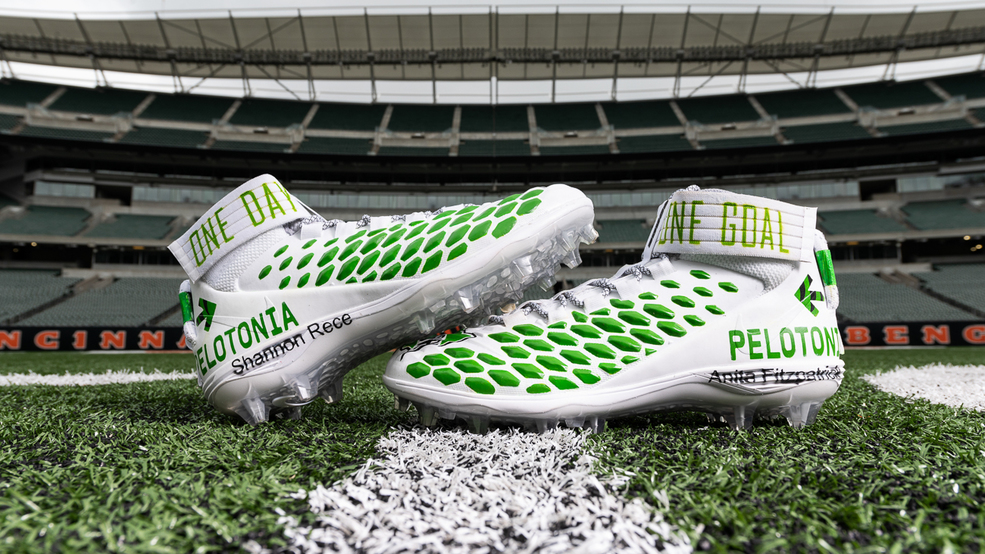 Bengals players are busy on the field, and off.

This weekend, Bengals player Billy Price laces up for a charity near and dear to his heart, Pelotonia, as a participant in the NFL’s My Cause My Cleats campaign. My Cause My Cleats allows NFL players to express their commitment and passion to the causes that are most important to them.

Bengals Center, Billy Price, a former Ohio State football player, is wearing his cleats this Sunday in support of Pelotonia. Pelotonia directs all fund to cancer research at The James at Ohio State University—Comprehensive Cancer Center.

When Price was a senior playing football for The Ohio State University, he interned at L Brands, the parent company of stores like Bath and Body Works and Victoria’s Secret. There, he met two-time cancer survivor Shannon Rece, who had a Pelotonia logo on her desk. They struck up what Rece calls “an unlikely friendship,” and ever since, he has supported Rece and Pelotonia wholeheartedly.

For #mycausemycleats, Price asked Rece to partner with sneaker designer and former Ohio State football teammate Kato Mitchell to create the cleats, which incorporates the Bengals' stripes in the Pelotonia arrow, Rece’s name, and her mother’s name, who also had cancer.

Pelotonia is a three-day experience in Columbus that includes a weekend of cycling, entertainment, and volunteerism. Every single dollar raised by the Pelotonia community goes directly to groundbreaking cancer research at The James at Ohio State – benefiting patients right here in our hometown of Cincinnati, across Ohio, the country and around the world. In 11 years, Pelotonia has raised over $207 million to fight cancer.

Who knew that one of the largest life-saving cancer research fundraisers, Pelotonia, is only 90 miles North on I-71 in Columbus?

No cancer is routine, and The James at Ohio State is not a routine cancer hospital. The James at Ohio State is the only cancer program in the country that features a National Cancer Institute (NCI)-designated comprehensive cancer center aligned with a nationally ranked academic medical center and a freestanding cancer hospital on the campus of one of the nation’s largest public universities.

On Sunday, when the Bengals take on the Browns, the cleats will be worn making this game an even more meaningful experience, recognizing Pelotonia, and their commitment to life-saving cancer research for The James at Ohio State.

Registration for Pelotonia 2020 begins in February. To register, volunteer or donate, visit Pelotonia’s website. For more information on cancer care and research, visit The James’ website.