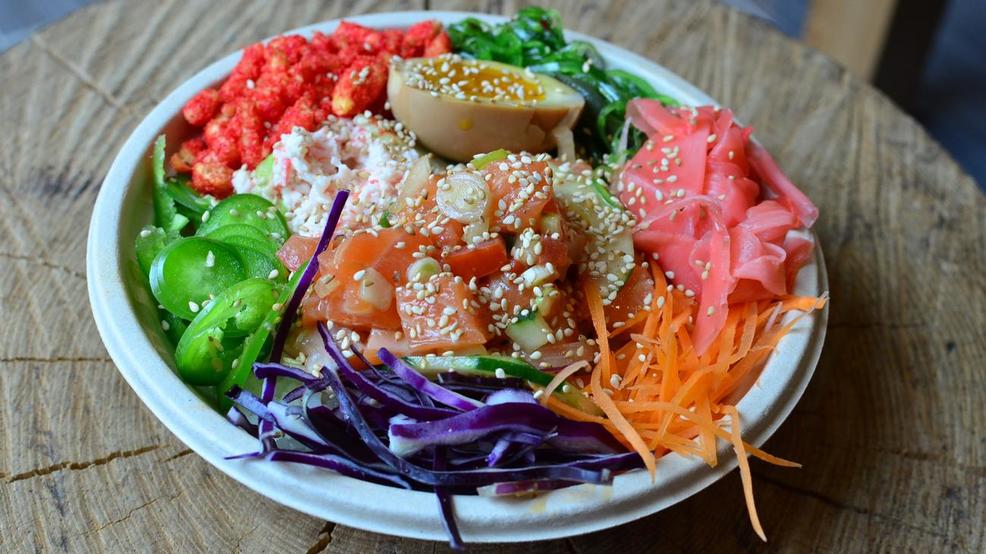 Poke Hut May Be Our Favorite Fast-Casual Option in OTR

When it comes to pleasing a refined palate, there’s no shortage of restaurants in Over-the-Rhine. Interested in Mediterranean tapas? There’s Abigail Street and Zula. Craving pasta that’ll remind you of a trip to Florence? Head to The Mercer. Hankering for 10 different options of cheese? Go to The Rhined.

Think of a cuisine and we can likely pair it to a restaurant within 10 blocks of Washington Park. And thanks to Baret Kilbacak, Sally Lin, and Ryan Ye, we can add a new dining locale into that already hearty collection.

On December 2, 2017, they opened Poke Hut (situated a block north of Taft’s Ale House) on Race Street. Kilbacak and Lin also have full-time jobs, working at GE and P&G respectively. Ye is a family friend with an experienced background as a sushi chef, having worked at restaurants around the country.

Poke Hut is the realization of three different dreams into one. Kilbacak first tried poke during a trip to Hawaii in early 2016. “It was a delightfully simple, quick, and extremely nutritious meal that provided energy comparable to a perfect North Shore swell,” he explained. Upon his return to the mainland, Kilbacak shared his newfound love of poke with his fiance. Lin was excited because she’d been looking for an opportunity for them to create a side business—and, moreover, it didn’t hurt that her family members were restaurateurs themselves. (It must be encoded in her DNA or something.) That’s when they brought Ye on board, to lead the culinary effort.

Simply put, it’s a raw fish salad. For some, like myself, that sounds amazing because I grew up eating sushi. For others, it’s entirely possible that upon reading the words “raw fish salad,” they did the “eww, gross” face. If you’re in the nose-turning-up camp, I encourage you to put your preconceived notions aside and give it a try. If you’re in the this-sounds-hella-awesome camp well, you’d be right.

The best way to think of Poke Hut is to imagine it like Chipotle, but much healthier. You’ll walk through a line picking out the specific ingredients you’d like in your bowl, or you can pick out preset options on the menu. The vibe is natural, yet modern with an unbelievably friendly staff.

Oh, and let’s not forget about the tea—bubble tea, to be exact. In addition to the traditional boba offerings, they have 12+ other drink toppings. “One of our specialty teas is the strawberry matcha latte, in which you can see three distinct later of fruit puree, milk, and matcha latte, complemented by strawier jellies on top,” Lin described.

She also alerted me to a new drink that’s coming soon—an alcoholic pina colada served in a whole pineapple. Aloha, my friends. I’ll see you at The Hut. Poke Hut, that is.