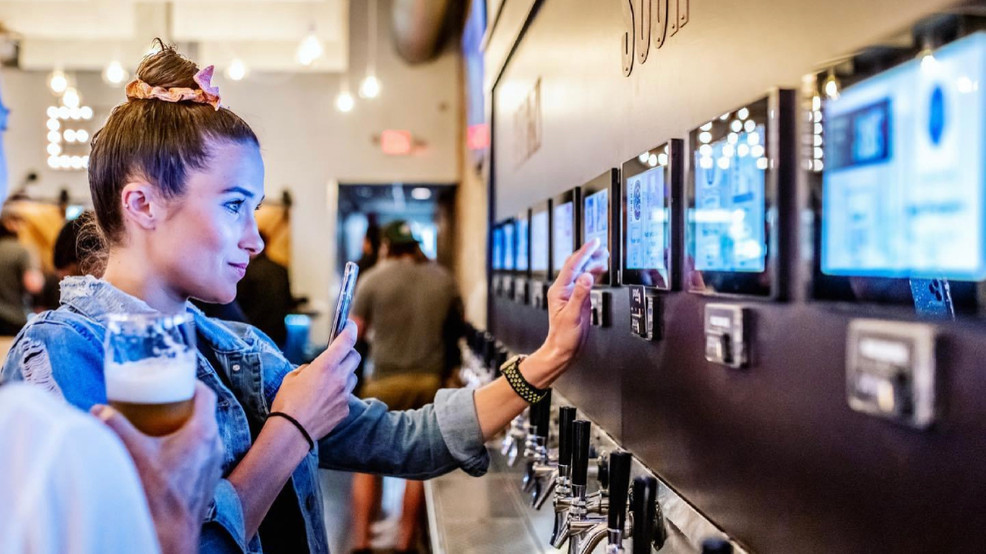 The next generation of drink-tech has landed in Cincinnati. Somehow impossibly offering something for everyone | Photo: Copper & Flame
SEE MORE

Copper and Flame Heats Up OTR

That's what a big sign up in lights on Copper and Flame's wall says, and they ain’t lying. Beer, indeed, there was.

More than 50 taps of it, in fact. From hard to find and fiercely sought after releases from of some of the hottest regional breweries all over the country, to local craft from the likes of Northern Row, Sonder, and Brink, just to name a few.

Enjoy the simpler things in life? Don’t worry, they’ve got plenty of High Life to satisfy even the thirstiest group of hipsters. What’s that? You want more?! Don’t worry, I’ll get to that later.

You may not assume you’re about to walk into one of OTR’s best kept secrets (for the moment at least) as you approach the humble minimalistic sign from Vine St. Yet, the moment you step inside, it’s hard to not feel like you’ve stumped into one of Chicago’s trendiest retro-chic lounges.

The rehab project was an enormous undertaking sparked by an innocuous trip to Chicago by O’Connell roughly three years prior to Copper and Flame. It was there, while visiting family, the ole’ idea lightbulb began to glow ever so faintly.

She visited trendy Chi-town hotspot Tapster, a popular pour-your-own format hotspot in the affluent neighborhood of Wicker Park. She was instantly hooked. However there was one enormous difference in what would eventually become her dream turned reality; there were only a handful of taps and no kitchen. Cincinnati had no idea what was about to hit them.

Turns out, O’Connell knew just the person to pitch this growing idea she just couldn’t shake. Meet Brandon Hughes, Co-Founder of Nine Giant. Brandon along with his Nine Giant partners know a thing or two about beer- and depending on who you ask, some may say the food is better. Sounds like a dig right? That’s actually the ultimate compliment to a brewpub, especially a brewpub I’d put in my top 5 Cincinnati Breweries on beer alone (personally of course). Hughes' reaction to O’Connell vision? “That’s a terrible idea, it seems cold and unwelcoming” Hughes bluntly said.

That’s when the couple took off to Chicago where they both saw the bigger picture. Then and there? Everything changed. Based on both of their prior experience in the hospitality industry in varying degrees, they knew they could take the risky idea and run with it. They could make it welcoming, they could make it social, but most importantly; they could make it OTR.

With an anxious dream, yet a gut feeling it could all work, all they needed was a space. Just so happens that then equally unique ‘gaming bar,’ The Rook, which previously occupied the space on Vine St. was looking for an out on their lease. It was all coming together, but there was work to do. Tons of it. The exposed brick which now gives Copper and Flame that chic-industrial Chicago-esque vibe? It wasn’t just hanging out at the time. The then walls were covered with plaster, the original downstairs bar had to be gutted, and an entire new upstairs bar buildout were just a few items on the enormous demolition undertaking that lasted almost every bit of a year.

The general structure may be the only thing one would recognize from the prior tenants. Months of blood sweat and tears, and what I can only assume 80 hour work weeks (we may be being generous) went into the transformation. The end result? An experience like no other in the region. What makes Copper and Flame special? Yes, while it’s true there are other bars and even breweries that utilize the flashy on-demand format; I’ll make it simple why Copper and Flame is special in nice little sexy bullet points.

A TOUR OF DOWNSTAIRS

The downstairs is where the journey begins, and for those of us who spent our teenage years running wild in Dave and Busters; you may feel more at home than you thought. Once inside, you’ll get the rundown from what we lovingly refer to as the ‘shpeal’ hostess. If you get Hannah specifically, she’ll make this mundane rundown of how everything works as fun as possible, trust me. Otherwise, we pity their job as let’s just say the learning curve varies by user and intoxication level.

The best part? Once you’ve got the Kings Island ‘keep your hands and feet inside the car at all times’ rundown of how things work, your journey begins. How that journey ends is completely up to you my friend. No waiting at bars holding a 20 dollar bill awkwardly sandwiched between two people sitting at the bar who are just as uncomfortable as you. No waiting for the bartenders to run downstairs to grab another bottle of Belvedere, just you, a card, and a dream.

Your tab begins once you receive your golden ticket (activated beer card) and serves as your running total throughout your entire visit. From that point on, it’s up to you to spread your wings and fly kiddo. Insert your card in the cute little holder and simply pick your tap. Your running tab is calculated by the style (and rarity) of beer/wine/cocktail poured per ounce and better yet, it keeps your running total on the screen each time for no surprises at the end of the night. Unless your drunk buddy swipes your card and buys the taproom a round or two, that’s on you pal. Expect to pay a little more for some of the hard to find stuff, however if you’re a Champagne of Beers kind of guy:

Untappd fanatic? Indecisive? Want to try everything? That’s exactly what Copper and Flame is about. Pour a little, or a lot. You’re both your own bartender and tour guide throughout one entire floor of beer from hoppy (IPAs), Belgian-y (need we explain?), and even Sours and Crispie Bois (IYKYK). Theres plenty of fresh glassware in all styles to go around, so don’t feel too bad about leaving an onslaught of carnage in your wake. I sure as hell did.

Leave the pub-style bench seating to the beer nerds downstairs and ascend the stairs to two maybe even more intriguing areas. To your right is what I’m calling the wine lounge. Fully loaded with inviting decor, an almost goodfellas meets upper Manhattan industrial vibe. Here you’ll find 8, you guessed it, pour-your-own format wines from local Revel OTR Urban Winery, to styles from all around the region. Copper and Flame is sure to please even the snootiest Sommelier.

Although the ‘wine lounge’ is tucked away in a cozy corner and you could probably stay there all night; turn left and you’ve just entered the second bar area. With bar seating both at and behind the bar and an open floor plan featuring a few tables and a smaller back private room, it was here is where we lost our minds. Both in the sense things got a little fuzzy but we couldn’t believe what we saw next.

Pour your own cocktails, I repeat you can literally pour your own house-made craft cocktails. This was next level cool, and may have been the most popular tap wall while we visited. O’Connell explained that they actually mix their own cocktails in huge batches in house, then tap them for on-demand enjoyment.

From Moscow Mules to Vodka Sodas, even the fancier traditional drinks such as Old Fashioned and Negronis can be found here. Oh, and they’re real good. I sampled the Old Fashioned and it was impossible to believe it just came out of a wall. Honestly it’s not fair, but to be clear I don’t care because it’s so much fun. One thing I couldn’t help to notice was the social aspect I observed while talking with Kathy. I want make perfectly clear I did have some reservations about a self-serve bar format. Does it take away from that special social experience of sitting at a bar or hanging out on the patio of Neon’s of yesteryear? This may have been the most surprising part of the visit. No it doesn't.

I noticed so many people talking about the drinks, about the experience, and recommending new things for complete strangers to try. If anything, the social aspect was exactly what Brandon and Kathy had worked hard to create since their initial reservations early on. Copper and Flame is very cleverly crafted to both allow people to spread out and choose their own adventure, but theres no doubt about it; socializing is plentiful (alcohol doesn’t hurt either). It was hard to wrap my head around how good of a job the team did with each detail of the entire experience.

Paying homage to both Owner’s Kathy and Brandon’s international tastes, and giving off a bit of Nine Giant vibes, the food is the real unsung hero of Copper and Flame. I’ve been a huge fan of Nine Giant since I first visited the taproom as mentioned earlier. Although the chefs aren't the same (shoutout to my main man Andrew at Nine Giant, he can crank out some bangers), the food quality is seamless in quality.

Executive Chef Sydney Fisher, formerly of Jose Salazar’s high end Downtown location Mita’s, leads the kitchen team at C&F. With a focus on street food with a Southeast Asian and South American twist, everything on the menu is a unique taste sensation. Among the most popular dishes? The wonton nachos, wings with insane ethnic twists, and an ever-changing line of cravable gourmet chicken sandwiches and burgers. The menu is always evolving and changing, much like Copper and Flame with.. well pretty much everything.

YOU GOTTA SEE IT TO BELIEVE IT, CINCINNATI

What’s the take away? You’ve got to see it to believe it. We said it’s strangely addicting for a reason. Where else can you drink what you want, as much as little as you want, and not stand around waiting for it? Home maybe? Boring. Couple that with awesome owners, great staff, incredible food. Copper and Flame isn’t going anywhere, and you’ll be hearing about it often.

Copper and Flame is located at 1115 Vine Street in the historic Over-the-Rhine neighborhood. To learn more, visit copperandflame.com and check out Cincy By The Pint for more reviews.

An awesome staff that will hold your hand through it all if needed, but also check on you if you’ve been slamming triple IPAs all night.