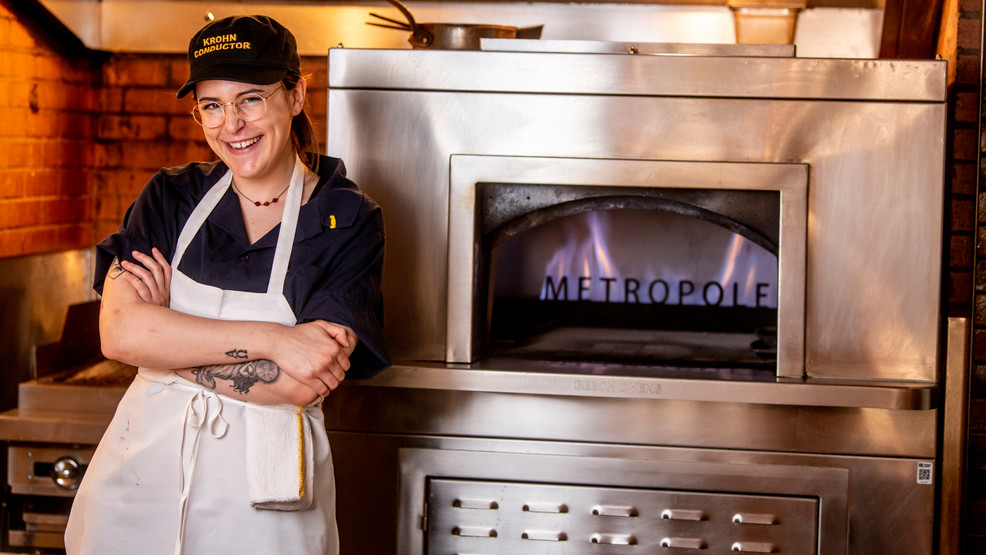 Cooking Up a Rewarding Career at Metropole

We all want to feel seen and heard. And in today's spread-too-thin food and beverage world, that's especially true. According to Alex Coleman, Line Cook at Metropole, staff is getting just that with Executive Chef Vanessa Miller and the culture she's built at the 21c Museum Hotel's flagship restaurant.

Coleman has worked at Metropole since October 2021, when she made the move to join their team. "It was a big deal for me to cook at a level like this," she recalls. "The restaurant has such a revered reputation, so I was nervous going into the interview. But Chef Vanessa immediately put me at ease, and was so authentic from the start that I knew I was in the right place."

In fact, Coleman says, she cried happy tears when she got in the car after her interview because it felt so much like home.

That's saying a lot, as Coleman's passion for food navigated her around the world, spending time across the country in cities like Los Angeles, New York, and DC, as well as abroad in Manchester gaining experience, building her skills, and finding the confidence she needed to succeed.

"Chef Vanessa is awesome to work for," says Coleman. "Meeting her and knowing that there's a woman in charge is really amazing, and I truly can't sing her praises enough. She's made it easy for me to believe in myself and cook on this level because she believes in me and my abilities."

As she gushes about the city's renaissance of downtown and the restaurants helping the city make a name for itself (Cincinnati was actually just named a “Next Great Food City” by Food & Wine Magazine!), Coleman mentions that it's not just the quality of the food that teams are cooking up. It’s also the culture that’s being built, and in her case, the support and positivity found at Metropole.

“Some places want you to leave your personal life at the door, but food is so much a part of both my personal and professional life that it’s nice to be able to meld the two together and still feel supported, seen, and heard,” she says. “Chef Vanessa allows us to be our true selves, quirks and all, while also setting us up for success in the industry. She truly wants to celebrate everything that we are and supports us every step of the way. Plus, we get benefits and I feel like I’m paid well — which you don’t find too often in the food/bev world.”

Coleman enjoys giving others new experiences with food, as well as her own new experiences in the kitchen. “Food here is so playful and unexpected, but there are some things that are tried and true, and they bring back memories for guests, but with a fun twist on the traditional,” she says. “Chef Vanessa’s personality is playful, but also professional, and she’s such a colorful person, all of which you can really see in the culture of Metropole as well as in the menu items we cook up for guests.”

It’s the guests who, Coleman says, also help to inspire her in all that she does in the kitchen at Metropole. “While I don’t get to really interact with customers out in the dining room, I love hearing about regulars who come in to visit,” she says. “And because of where we’re located, we have a theater-based crowed, and knowing that many of them are coming in to see us on their way out to a special event really makes me feel so appreciated. It’s so nice to be a part of people’s special days and nights.”

Between the guests and Metropole staff, Coleman says it's a welcoming, encouraging and supportive space she just loves being in. “Even when I’m gone on vacation, I really miss the people I work with. I just love them and I’m really lucky to be able to say that,” says Coleman. “Everyone around me allows me to be exactly who I am and celebrates it with me. We should be able to be proud of ourselves and who we're becoming. If we’re able to find our footing in this crazy world, that's happiness right there.”

Check out Metropole for yourself during the Greater Cincinnati Restaurant Week, April 18-24. On Monday April 25, they're hosting a Job Fair at 21c from 3-6pm. Learn about positions available, see the space, and meet the team in person. Click here to learn more.