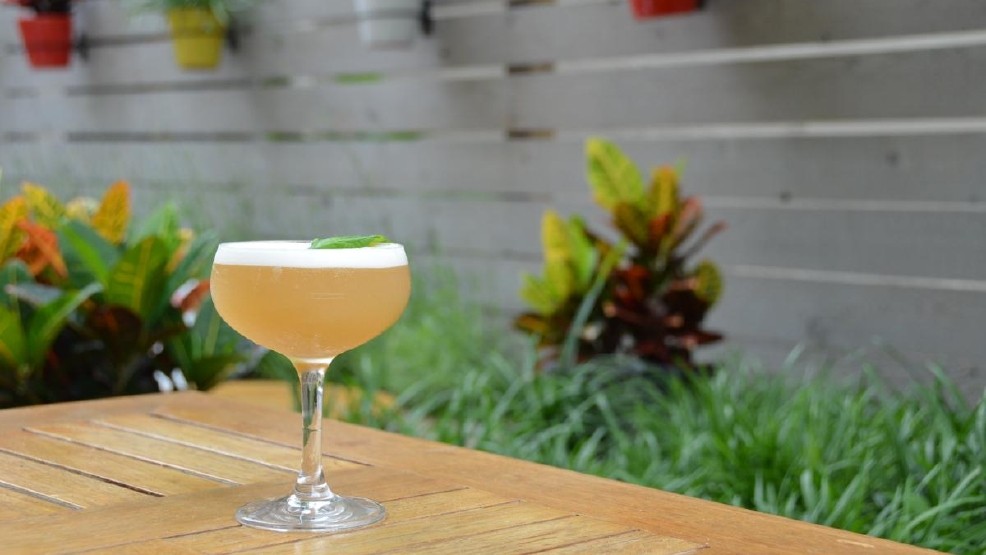 May. Time for some outdoors-ing. (Even if the weather isn't exactly cooperating.)

(Really makes you wonder what I'd do for a gerund. )

After all, why go on that healthy (but ultimately, dispiriting) jog when you could check out one of our area's many outdoor drinking & eating destinations?!

Ok, fine... There are probably some good reasons why you really should go on that jog. But we're realists here. We know you probably won't.

And when you don't, here are all the places (in no particular order) you can hit up instead.

Did I say "no particular order?" Ok, well... sort of. The caveat being that it would've been foolish not to put Cincinnati's premier outdoor dining location first.

I say that with only a little bit of tongue-in-cheek-ness. Because, while Eli's cramped building (ordering hut?) and collection of picnic tables might seem unimpressive, it's not really about that. The real magic happens on those sunny summer afternoons when hundreds of people convene -- equipped with coolers of beer and empty stomachs -- ready to down affordable helpings of Cincinnati's best food.

When 21c Cocktail Terrace opened a few years ago as an extension of the hotel's highly regarded Metropole restaurant, the primary attractions were the pop-tails (popsicle cocktails) and the cute yellow penguins. It's grown into way more than that. Nowadays, it's a regular stop for groups and couples looking to enjoy a nice drink in the rarefied air above Cincy's streets. And, of course, they still have the pop-tails. And the penguins.

I had to do a double take when I saw what'd happened to Uptown Clifton since I'd been there last (almost two years ago). Whoa...

Sparkling new-urban digs. Coffee shops. Clothing stores. Restaurants -- the most central of which is Keystone Bar & Grill. If you've experienced Keystone, you know what they do well: mac and cheese, burgers, wraps, quesadillas, etc. But the most impressive thing is Keystone's patio, which spreads into an open space that provides high foot traffic and a persistent energy.

Whether you love Keystone or merely like it is entirely up to you. But sitting out on that patio is objectively awesome.

OMG this place is so hot right now. Warm, I mean. As in, when the sun is shining and the air is humid, you'd better believe you're gonna sweat.

That's a small price to pay for being at the hottest place in the city. Popular, I mean. As in, it's what's everyone's talking about. ("Have you been to Rhinegeist's new rooftop yet?") And for good reason, too. With that many delicious Cincy-brewed beers on tap, there are few other places in the city I'd rather be.

It's a testament to The Famous Neons Unplugged that a place with such a (cool adverb alert) cumbersomely long title is so well known. But it is (thanks to its open, dog-friendly outdoor patio and its top-notch drinks). Really, you should expect nothing less from a Wellmann's Brand bar. This place was cool before OTR was a thing, and you can bet it'll be cool long after the city's attention refocuses elsewhere.

Sure, we could have chosen the Cock and Bull or Unwind Wine Bar (both of which have their charms; both of which offer outdoor seating). But Cork and Cap of Hyde Park deserves some love for a) being new and b) having an alluring, grove-like quality to its outdoor seating. The setting is intimate, romantic, and relaxed -- qualities that pair well with a dry Malbec and a fig-jam & fennel pizza.

It's a warm summer evening and the sun is setting gloriously on the Ohio River. Where do you go to take it all in? For many people, the answer is Drews on the River. It's the best of casual dining paired with a tropical atmosphere. There's live music on the weekends, corn hole, a tiki bar, and that gorgeous view of the river. It'll definitely tide you over between summertime trips to the beach.

I made the initial mistake of avoiding Via Vite because I assumed the food wouldn't live up to the location. (I'd willingly pen a three-part apology to the restaurant, but space is limited.) So, I'll just say that the food is extraordinarily good. Also, it has a wonderful outdoor section from which you can overlook Cincinnati's bright & shining center, Fountain Square.

Arnold's is in an old brick building on Eighth Street, the kind that initiates patrons into the old-school vibe before they even step inside. The often packed bar is fitted with dark wood and copious w