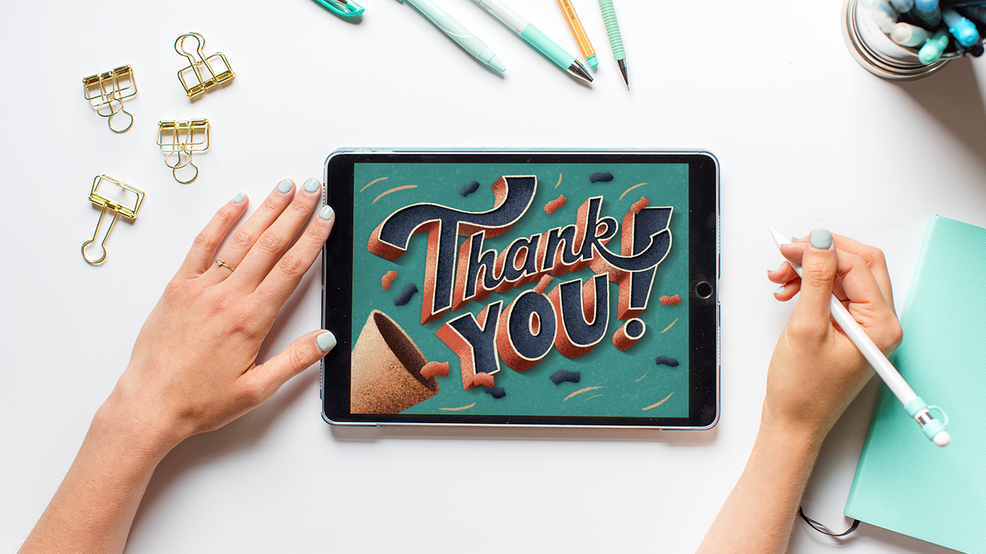 Unfettered Letters' latest course, “Adding Texture & Illustration to Lettering in Procreate”, covers techniques in the iPad app for giving your lettering artwork professional appeal and helping it to stand out. There is also a beginner-level online course on Skillshare that teaches hand lettering in the Procreate app for the iPad entitled "Fundamentals for Lettering in Procreate." / Image: Kristen Victoria Photography // Published: 9.21.20
SEE MORE

Gracia Goldberg of Unfettered Letters did what most of us only imagine: turning a hobby into a successful business. In her case, it meant teaching the graceful art of hand lettering through easy-to-understand online tutorials and lettering workbooks where you can learn to either letter by hand or through the Procreate app.

From faux calligraphy to Victorian-style lettering, you'll be able to find a style that's right for you that you can learn on your own or with a group. Think you're not the artsy type? Think again! Goldberg promises anyone (even a die-hard "left-brainer" like herself) can follow along with her website's illustrative step-by-step guides she built, drawing on her background in education and instructional design.

Cincinnati Refined: How did you get started in hand lettering?

Gracia Goldberg: Lettering started as a hobby for me. I've always loved neat handwriting, and one day I saw a Buzzfeed listicle about beautiful note-taking or something like that. It was from that post that I learned "hand lettering" was even an art form. I started looking into it more from there, teaching myself through online tutorials and from following lettering artists on Instagram.

CR: Do you have an art background?

GG: I do not have any professional training or background in art. I actually wasn't a big fan of art class in school as a kid! I've always been more left-brained: organized, literal, and analytical, so I never thought creativity was my strong suit.

I've since learned that there are a lot of different forms of creativity and that you can be both analytical and creative at the same time. I think lettering lends itself well to that juxtaposition—there are still some rules and guidelines you need to follow when it comes to letterforms, but then you add new and interesting elements and effects to put a creative spin on these letters that everyone's so familiar with.

CR: How long have you been running Unfettered Letters?

GG: I think the "official" start as a business would be when I opened my Etsy shop at the end of 2017. I started out focusing on doing calligraphy by hand and teaching calligraphy workshops then got into the digital world and started printing more illustrative hand lettering on paper and home goods for sale in local stores and craft markets. Recently, I've expanded in a new direction by focusing on teaching digital hand lettering through online courses, workbooks, and tutorials.

GG: Hand lettering is the creation, illustration, and layout of letters and words in any way that's not just using a font. So you could be using a pencil, pen, paintbrush, or, in my case, an Apple Pencil on an iPad using a drawing app called Procreate.

The important distinction is that hand lettering is drawing letters, not writing letters. You're building letters up out of simple shapes and adding illustrative effects to those shapes. This also means that you can be a great hand letterer even if you have terrible handwriting—they're two entirely separate skills!

CR: Do you have a favorite way to letter?

GG: I don't think I could choose one favorite style! One of my favorite parts about lettering is that there are so many different styles and ways to illustrate letters. I love trying out different styles and learning new techniques to add interesting effects to my lettering. In general, I like to use fun, whimsical lettering styles that feel very hand-drawn; nothing too rigid or precise.

CR: What is your most popular workbook?

GG: My most popular workbook is my Monoline Script workbook. This teaches the basics of the shapes you need to master to get consistent, neat, script lettering, so it's a good starting point and can serve as a foundation for other more complicated script lettering styles. It's also a pretty trendy style that you see in a lot of branding, especially on Pinterest and lifestyle blogs.

CR: Why do you enjoy the art of hand lettering?

GG: Lettering, and drawing in general, can be really relaxing and therapeutic. I think I gravitate toward lettering because it's a creative outlet that's so much more accessible, especially for people who don't consider themselves really artsy or creative in the traditional sense.

We already know our letters and what they look like, we've been practicing their basic shapes for years, so you've already done the groundwork. It's just a matter of learning some new techniques and applying them to those familiar shapes. Also, being a more literal person, I don't excel at things like symbolism and abstract representations, so lettering is an easy way for me to create art with a meaning that is literally spelled out in the work itself.

CR: Why do you think hand lettering is so popular right now?

GG: I think hand lettering lends a sense of authenticity that people are pulled toward. With so much done digitally these days, seeing something created by hand that is unique and not used across several different companies or projects like a font can be really appealing.

[Also], it's an accessible art form that's not too intimidating to people without art training. You don't necessarily need any special supplies, and you're already halfway there by knowing your alphabet. It's also something you can use in your everyday life.