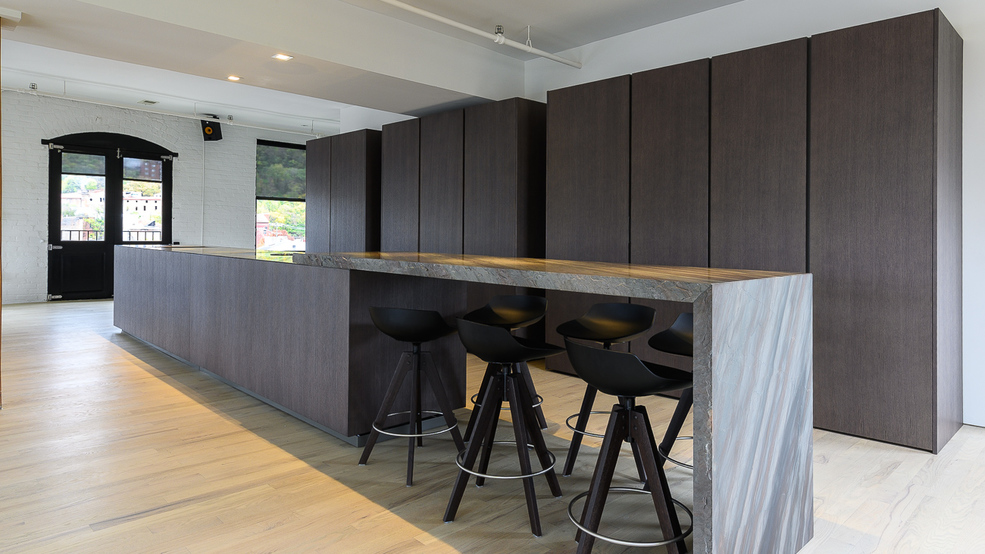 "I wanted something to be in contrast with the white floor, which is very European. And I wanted stone and wood, which is a classic conjugation. I wanted a classic instance of a modern kitchen. I call it a 'traditional model'—traditional for us modernists." -Agostino Fede / Image: Phil Armstrong, Cincinnati Refined // Published: 11.21.19
SEE MORE

Agostino Fede is the owner of NOLI Modern, an Italian kitchen design shop in Findlay Market. He was born in Verona, Italy and currently resides in Over-the-Rhine, where he recently finished a full renovation of his home kitchen. To create his perfect space, Agostino took inspiration from his colleagues back in Italy as well as his time spent as a lab rat in pharmaceuticals.

After several months of living in a construction zone, Agostino and Tom, his husband, have weaned themselves from their steady diet of carryout and delivery to finally break in their new kitchen.

Below is an interview with Agostino about the process, and photos of the finished product can be found in the gallery above.

With this design project you had no choice but to bring your work home with you. How was the work-life balance?

Agostino Fede: It was stressful. At the same time, exhilarating. The execution was particularly stressful when you do a renovation like this. A single piece of advice everybody should know is: you can't live in [your space] when you renovate it. Especially with an open space. Everything was a big mess for six months.

You designed the space so I know you're confident in it. But are there any features you're especially in love with?

AF: I'm in love with the double pocket. That’s where we have the entire breakfast corner and washing center hidden. We use that in the morning and the rest of the day it’s closed. I particularly love the massive, solid stone countertop. This is a piece of love. Only the top weighed 700 pounds. The entire kitchen weighed 3,000 pounds and we had to crane it in through the window. If you look at the kitchen from the front, it’s like you’re looking at a stone block. That's pretty unique.

From where did you draw your inspiration for such a monolithic kitchen?

AF: Obviously from being a former lab rat. I like the process. Going from cold to cooking to eating, it's completely seamless and it fits the space. I wanted something to be in contrast with the white floor, which is very European. And I wanted stone and wood, which is a classic conjugation. I wanted a classic instance of a modern kitchen. I call it a "traditional model"—traditional for us modernists.

Which design choices did you make for this kitchen that were different from your clients’ kitchens?

AF: I made the choice to have the cooktop and the sink on the same work surface. Typically, the customer separates that—back to back or different corners. It was a radical choice for Cincinnati that everything is hidden. The only appliance you might think is an appliance is the cooktop. But there's no bench. There's no hood. It's a downdraft. I made the choice to be very minimal in look, very pure. If I were to do this for a customer, I would be ecstatic. I can do a piece of this, piece of that.

Most of the customers are getting accustomed to seeing the paneled appliance. This we've managed to do with pretty much every customer. You know, the hidden fridges, pull out trash and recycling bins by the sink, and obviously, the dishwasher. That's why this is a pretty functional kitchen once it's pocketed. I think it's going to take a while to have an American kitchen behind doors.

AF: It's the same in Italy. The difference is we not only make and consume food, but we stay in for a party. So once we finish dining, we stay at the table. We play cards, we smoke, we drink. It's the dolce vita. [Cooking] basically becomes part of the party. It's part of the evening. It's before, during, and after.

I've never been to Italy, but from what I understand, dining is a much longer process there.

AF: The guests come in and we open a bottle of wine. We start chopping vegetables together, preparing the pasta together. It's very slow. We prepare the meal together and then drink and eat, clean together, and then whatever—play, drink, and listen to music. Leave the imagination open.

Don't forget to check out Agostino's modern kitchen in the photo gallery above.