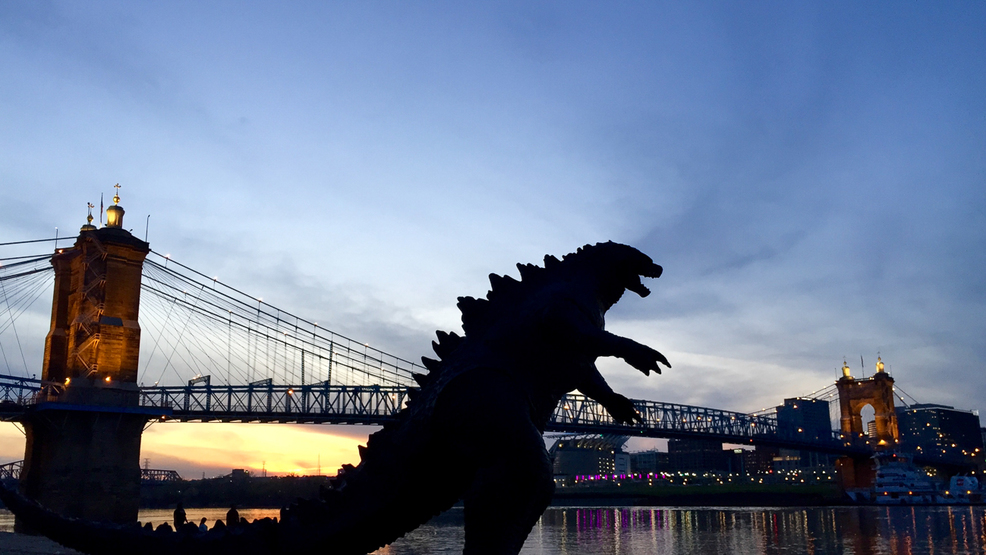 Go Go Godzilla / Kristian Geer uses forced perspective photography (not Photoshop) to inject surreal elements–that is, toys–into every day scenes to alter their significance. Pulling from an infinite well of imagination, his creativity paints the Queen City as a technicolor dreamscape for a cast of fictional characters interacting with our real world. / Image: Kristian Geer // Published: 8.29.18
SEE MORE

The affable Kristian Geer is, in my opinion, one of the only truly original Instagram users in Cincinnati.

Scroll through your feed and you'll inevitably see photo after photo of Cincinnati scenes, food, posed models, animals, countless drone shots of the Roebling Bridge, and every other subject the majority of us photograph for our accounts. That's not Kristian. He doesn't wish to show us the world exactly as it is.

Using forced perspective photography (not Photoshop), he injects surreal elements–that is, toys–into every day scenes to alter their significance. Pulling from an infinite well of imagination, Kristian's creativity paints the Queen City as a technicolor dreamscape for a cast of fictional characters interacting with our real world.

He's not just taking the same shot down the middle of the Roebling Bridge that you've seen a hundred times and uploading it to Instagram. He goes one step further by adding an X-Wing from Star Wars to the foreground, subtly transforming the iconic bridge into the trench of the Death Star. The scene, while still obviously the bridge, assumes a whole new role and forces the viewer's mind to align with that of Kristian's.

In other words, he's Jedi mind-tricking us into seeing a place we all know in a totally different way using a single prop. That's what makes his work so unique.

We had to learn more about the man behind the art. Here's what he had to say...

Cincinnati Refined: Sum yourself up in a sentence or two.

Kristian Geer: I am the product of an overactive imagination and indubitable work ethic mixed with the slightest touch of sarcasm and humor.

CR: What’s your background with photography? What is it you like about photographing toys?

KG: Mrs. Geer gave me an iPhone for Christmas a few years back and I just started taking photos of everything I saw. My first toy photos were just shots of my collection, stuff like the Superfriends posed in front of the Hall of Justice. Then I thought, how fun would it be to see these guys at the REAL Hall of Justice? By photographing my toys I can tell their stories as I see them in my head.

CR: What was your favorite childhood toy? Have you incorporated it into one of your photographs?

KG: I had a giant Godzilla when I was young that I really loved. Although that one is long gone, I have paid homage to my old friend. I hope wherever he is now, he’s proud of me.

CR: Is there a certain genre or era of toy you prefer?

KG: The older Kenner twelve inch figures are the best. They’re not the most posable but there's just something so honest about the way they look and photograph.

CR: Do you plan out your shots or do you carry around a sack of toys Santa-style everywhere you go? What’s your process?

KG: A whole lot of both really, though technically it’s a G.I. Joe footlocker, not a sack. Most of my stuff is planned but sometimes I just have to be ready when the lightning strikes. If I get a better idea later (which I often do), or think I can do it better a second time (which I often do), then I go back. But sometimes the moment is fleeting and if you don’t capture it when you can...

CR: Do you work with someone to get your shots just right?

KG: My wife’s fine arts degree has played a critical role. Her knowledge of the principles and elements of art have been guiding me since the beginning, and she never lets “good enough” fly when she knows I can do it better.

CR: Is there any post-processing (like Photoshop) involved in your process?

KG: Not much if at all, but honestly only because I’m not very apt with the process. At the most I’ll brighten up something that’s a little too dark, or maybe saturate the color if it looks too faded. Usually, if it doesn’t look right to me, I’ll just try the shot again.

CR: You mainly create humorous, lighthearted photos, but you did a serious piece on homelessness this past Memorial Day. What inspired that piece?

KG: While I set up my shots, I tend to get people that like to watch, generally the homeless. Often we talk about the toys and they’ll tell me about something they had as a child they miss, and when I’m done we look at the photos together. I just wanted to highlight the fact that these are people with value, with real lives and memories that we should care about.

CR: Do you think you’ll do more commentary on social issues like that in the future?

KG: I’m certainly trying, but with this particular genre its tough to be poignant without looking as if you don’t take the issue seriously. I have to be careful or the whole point gets lost.

CR: You’re an artist who uses a medium traditionally associated with kids. Are you a kid at heart?

KG: Every human on planet earth is a kid at heart. Some are just more petulant than others.

CR: You have a show and a book coming out soon. Tell me about that.

KG: On August 31st, I’ll be showcasing some of my best photos at Pendleton Arts Center Annex and releasing my first book, Cincy Kids. It’s inspired by the Johnathan Queen Toy Heritage mural and features the Kenner toys our city is known for. Each toy received its own unique backdrop from Cincy and a nice little children’s poem to go with it. It was a massive labor of love and my mom is pretty darn proud of it.

CR: Where can people find your art?

KG: They can check my Instagram, Facebook, or website. (Please don’t judge me. I’m not a web developer.) Or, meet us in person at Pendleton Arts Center on final Fridays, the Cincy Comic Expo, and Art on Vine!