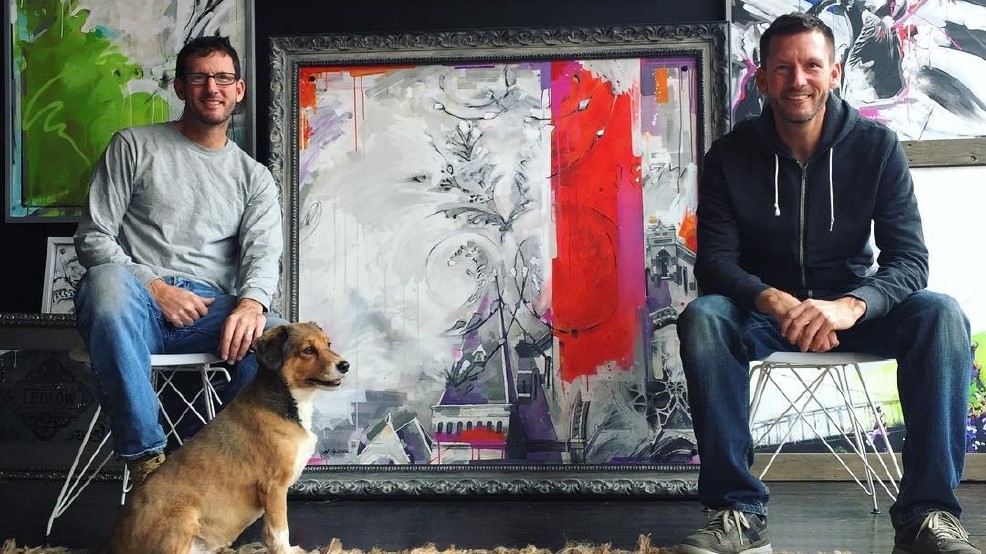 Jeff and John Winkle are identical twins and respected artists. Their success story proves no one path in life is permanent, and dreams can be achieved by following your passion. / Image courtesy of @jeffandjohnwinklestudio (Instagram) // Published: 1.7.17
SEE MORE

Jeff and John Winkle are identical twins and respected artists. Their style is modern-meets-traditional, their personalities are individual, and their history with art is convoluted. From careers in graphic design to 20+ years running a landscaping business, the Winkle brothers have always navigated the twists and turns of their journey with passion. Most recently, their journey has landed them in a remarkable studio space in their hometown of Ludlow, Ky.

Their success story proves no one path in life is permanent, and dreams can be achieved by going after what inspires you.

How old are you guys? When did you start getting into art?

We have been drawing ever since we can remember. When we were in elementary school, we used to draw the KISS band members, the KISS logo, semi-trucks, old cars, and the characters from Highlights Magazine contests. We both went to Eastern Kentucky University to major in Graphic Design. John was not a fan of Graphic Design, so he followed his passion and switched his major to Painting his sophomore year.

Eventually, we thought about how we could use some of my "leftover" ideas and photographs and combine them with John's artistic talent and create something really unique out of them. I would send him images and crops and he started to paint and draw again, which he really hadn't done for 20+ years.

Tell us about the twin thing (identical, fraternal)? Can people tell you apart?

We are identical. We look a lot alike and sound exactly alike, but have totally different personalities. I'm considered high-strung, always have to be doing something, full of anxiety. He's more laid-back, works at his own pace and is more care-free.

Tell us about the studio space. How long have you had it?

I saw a storefront building in Glendale for sale and thought about how awesome it’d be to have a studio space of our own. We talked about how John's wife had seen a building in our hometown of Ludlow for sale and thought it’d be great to get back to our roots and help the revitalization that was in its very early stages there. We went down to Ludlow, looked at a couple places and put a bid in on one. Boom, offer accepted. So almost three years ago, Jeff and John Winkle Studio was born.

What’s your goal with it?

Our main goal for the studio is for John to be able to follow his passion and make a living creating artwork.

How would you describe your respective styles of art?

We both have a modern-meets-traditional kind of sensibility. I obviously lean more to the graphic touch and he has the expressive touch. We love contrasts. Old vs new. Reclaimed wood/browns vs. bright color. Light vs dark. Black & white vs. color. Urban meets the suburbs. Painterly meets graphic.

How does what you’re doing fit into the local art scene?

We are still figuring that out. We really want our work to stand out and apart from anything you might see. Our overall approach to the studio and our art is casual, optimistic and light-hearted. We want to create work that inspires us and that will hopefully inspire others. We want it to be positive and not so negative like so many things you see on social media and in the news.

What inspires you to create?

We just have this inexplicable, deep-down drive to create something from nothing. It's hard to explain. We think it's just how God wired us. We love to look at something where others may see nothing, see its potential, and determine how we might make it interesting or unique. We just dig creating things and getting back to using our hands as much as we can.

Who’s adorable dog is that in the IG pics? Is he/she the office manager?

Ha! That is my dog, Maci. She goes to the studio with me every once in a while. She is my absolute go-to for stress relief. I love to take photographs and she is just so damn cute and makes good subject matter. She's almost nine and she still has a puppy look about her.

What are three words to describe your twin connection?

Best friends. Bonded. Complementary (as in creating a balance). Although, sometimes we butt heads because we are pretty hard-headed.

How about three words to describe you as respective individuals?

What’s the long-term goal with the studio and with your art?

Long term, we would love our art to be known and sought after and sell for millions --- but hopefully before we die --- not after. Kidding! We just love to create and would love to be able to make a sustainable living off of our work and even continue to do it when we retire.

As far as the studio goes (and Ludlow goes), we would love the momentum in Ludlow to continue and we just want to play a small part in our hometown's comeback story.

It would have to be our first piece that sold which was found on Facebook by local news personality Amy Wagner, who saw it in a pic of a mutual friend that was in front of it at one of our first shows. Amy and her interior designer had just finished her living area and decided it would work perfect in the space.

For John, it was seeing Monet's Water Lilies in person in Chicagol and for me, seeing Chuck Close's work in person was pretty amazing. Also, we made a trip to Art Miami last year and we went to see the Wynwood Walls district and were blown away.

To see more of Jeff and John Winkle's work, head over to their studio at 329 Elm Street, Ludlow, Kentucky 41016.