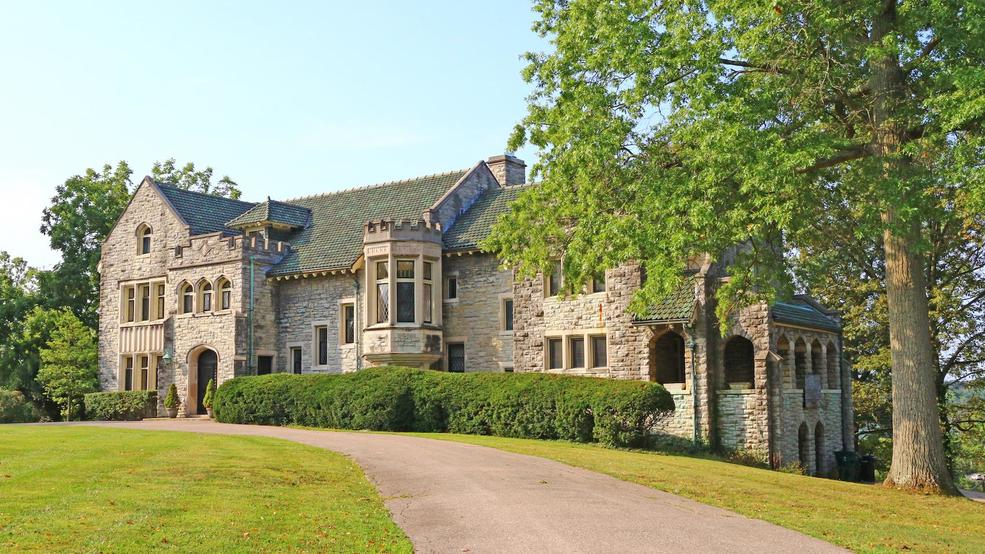 2581 Grandin Rd is a 9,400-square-foot Gothic Revival home with 6 bedrooms, 5 full bathrooms, and 1 half bath. It was built in 1905 for Mary Hanna, the daughter of financier John Hanna. In 1957, Charles and Mary Barrett bought the estate, raising their six children there. It’s currently on the market for $2.9 million. / Image courtesy of Sibcy Cline Realtors // Published: 10.21.17
SEE MORE

A Prominent Cincy Family Grew Up In This $2.9 Million-Dollar Hyde Park Estate

Remember that friend’s house you loved going to as a kid? The one with the air hockey table, giant TV, and the L-couch where all of life’s stressors would melt away into cushions made of dreams. It was the cool house with the cool snacks. Dagnabbit, they even had a pool. So yeah, I guess I’m still jealous of Lindsey’s parents' house. But that was a lifetime ago.

Now imagine if the house we’re featuring today was your childhood friend’s house. As Joey from Blossom would say, “WHOA!”

THE BACKSTORY ON 2581 GRANDIN ROAD

This 9,400-square-foot Hyde Park mansion was built in 1905 in the Gothic Revival style by Elzner & Anderson, a Cincinnati-based architecture firm. It was constructed for Mary Hanna, the daughter of financier Henry Hanna. She had ties to some pretty prominent Queen City players. Her mother, Mary Jane Ellison Hanna, was related to the mother of Anna Sinton Taft, who was the sister-in-law of President William Howard Taft.

Mary never married, so when she died in 1956, she left a good portion of her fortune to the University of Cincinnati and the Cincinnati Art Museum. Her estate, valued at $5.4 million (at her time of death), would be worth $52 million today, give or take a couple of million.

She bequeathed the beautiful home to John B. Hollister, a friend and attorney. But shortly thereafter, another notable family moved in.

THE CHANGING OF THE GUARD

In 1957, Charles and Mary Barrett bought Hanna’s former home. The Barrett name likely sounds familiar, as it should.

Perhaps you’ve heard of the UC Health Barrett Cancer Center, named after Charles Barrett, who was a radiologist and cancer researcher. Or, more likely, you know of John Barrett, CEO of Western & Southern Financial Group. Charles was John’s father. And this lovely estate, located at 2581 Grandin Road, served as the childhood home of John and his five other siblings.

THE CHANGING OF THE GUARD (PART DEUX)

But now the home is awaiting a new family to join the ranks of its hallowed history. And with its ornate details, from the Rookwood-tiled fireplaces to the decorative wall pockets to the Bedford stone facades, it’s a wonder someone hasn’t already taken it off the market.

Just think, this estate could be the “cool” house for your children’s friends or, let’s be honest, for your friends. Instead of Chips Ahoy! cookies, you (this extremely mature and well-off adult) can serve Roquefort cheese on Effie’s Crispy Corncakes alongside a 2009 Chateau Margaux. Then you can drift off into a peaceful slumber on your own version of an L-couch with cushions made of dreams. Ah, it sounds rather magical, doesn't it?

2581 Grandin Road is a 6 bedroom, 5.1 bathroom home that’s currently on the market for $2,900,000. It’s listed by Julie K. Back of Sibcy Cline. Feel free to reach out to her directly if you’re invested in learning more. Email: jback@sibcycline.com.