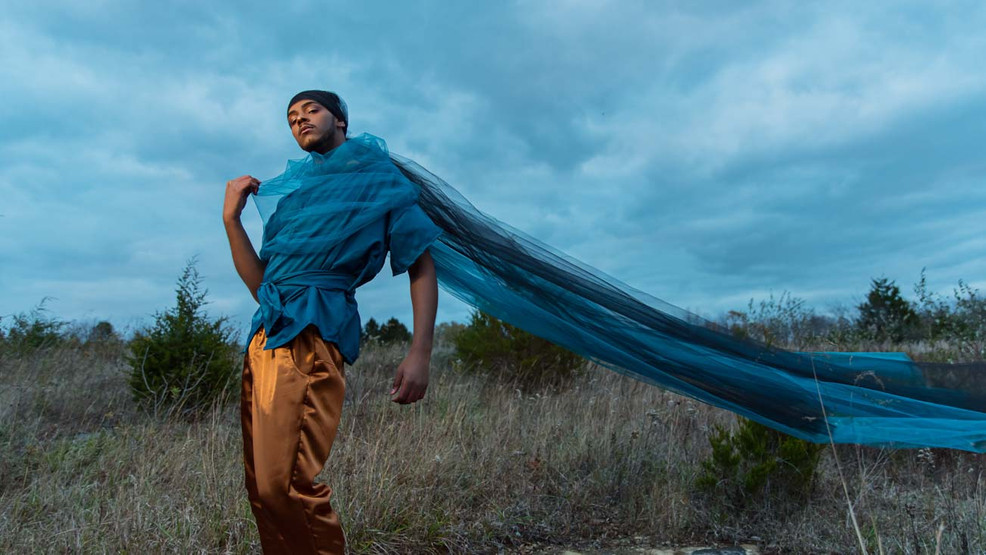 DraKar designed the teal piece on this editorial shoot, which was shot by Anna Sharp on her farm in Hillsboro called Sharp Little Farm. The shots are expected to be published in two international magazines: Shuba Magazine in Paris and Intra Magazine in London. / Image: Anna Sharp (@goanamedia) // Published: 12.9.20
SEE MORE

After growing up in Hamilton, DraKar Parker found it hard to be “against the norm” when it came to fashion. As early as high school, he knew he wanted to stand out. He studied Public Relations at NKU before diving into the field he was most enthusiastic about—fashion. He went on to study Fashion Marketing and Management at the Art Institute of Cincinnati.

Since getting into the intermingled worlds of fashion, cosmetics, and art, there aren’t many roles DraKar hasn’t taken on. He’s worked and modeled for clothing shops, taught fine art for students at the Boys and Girls Club of West Chester/Liberty, designed his own signature clothing (after teaching himself to sew, by the way), and worn the many hats of creative director, wardrobe stylist, photographer, and more on various photoshoots. One of his latest endeavors is hair styling at Studio 900 downtown.

Keeping up with all that? We had some questions about his ambitious and diverse experiences, ourselves.

Cincinnati Refined: What have been some of the highlights of your career up until now?

DraKar Parker: In 2012, the very first job that I ever had was when I was at the mall and decided to go into Hollister. The managers were working that day, and they pulled me aside and said, ‘Hey, why don’t you come sit in on this interview on this date.’ So I gave it a shot, and they hired me as a model. It was a huge shock, but it was also very reassuring that this is what I should be doing. We did live-modeling where we’d wear pieces in the storefront, and we also did print.

I started to pursue modeling [again] after I lost my job at the Boys and Girls Club. I met a guy named Angelo Axel Culvert. He had seen a fashion illustration on my Instagram and he left me a message saying, ‘We should meet up and collaborate’. He already had experience in the fashion industry, and he pretty much started me on my path to modeling and all else.

One of my first photoshoots ever was held at the salon I work at now—it’s kind of a full-circle moment. The salon I work at now is formerly known as Sotto Salon on the Ohio River, and under the new management, it’s now Studio 900. We used all of Angelo’s original designs on the shoot—he had his own company, Pretty Penguin Studios. I got to style the models and also model in it. It was such a beautiful location, and I just loved being there and being in that atmosphere. It inspired me to get into hair styling.

CR: And you’ve coordinated shoots of your own, as well?

DP: I used to host my own group photoshoots, just trying to get models of varying experiences to give them a shot at being published and having that experience like I did.

I posted on Facebook that I wanted to do a group shoot, not expecting the response I got. I ended up organizing a photoshoot with pieces I projected would be trending—the grunge fashion coming back. I had assembled 10 models, a photographer, and a makeup artist. I didn’t want anyone to pay, I just wanted everyone to be there and live that experience. I fully plan to do more shoots like that when the world gets a little better. But in the meantime, I’ve been wanting to do more COVID 19-safe collaborations with people.

CR: Tell me about some of the items you’ve designed and what inspired them.

DP: I’ve designed pieces in a mini collection that I plan to shoot in, not necessarily mass-produce. The teal garment came first, and there’s a fuchsia, red, and blue poncho I designed. I also have designed African-inspired garb.

I do, however, do bespoke designing, where I take custom orders and design one-of-a-kind things. It’s a special thing for me because that’s how I felt in the past; wanting to stand out, so I love the idea of helping people have original pieces.

Usually, it’s in the form of a direct message. When I share pictures of pieces that I’ve been doing for photoshoot purposes, I get inquiries about African-inspired garments. I do like to take cultural pieces and modernize them, but every now and again I’ll have a special request for a cocktail dress or something like that. Typically, I aim for cultural pieces with a modern twist out of pure appreciation for cultures and diversity. My mom has always raised me to be open-minded and accepting. I’ve met a lot of different people from a lot of different backgrounds and all of that has inspired me to take this culture and broadcast it.

CR: Have you been published before?

DP: The first fashion design that I’m getting published in a magazine is the teal look. Anna Sparp (@goanamedia) was the photographer on that shoot. It’s in the works of being published in Shuba Magazine, based in Paris, and Intra Magazine, a newer publication based in London.

DP: Studio 900 is where I currently work and I’m super excited about. I’m so happy to be a part of a team that wants to grow, and it’s such a close-knit environment, despite the world we have going on. It’s a nice piece of happiness.

I do hair, makeup, and I even went into skincare before hair I try to have a pretty good balance because I struggle on honing-in on one thing at a time. I find that I’m happiest when I’m able to switch it up a bit. I can be booked for modeling, hair and makeup, as well as design.

CR: Is there a certain celeb you’d love to work with or design for?

DP: I’ve thought about this for years, and it changes all the time, but I’m obsessed right now with anything Rihanna does.

As far as designers go, I’d love to work with Dior—I love the elegance and poise. And I also love the classic, clean-cut, minimal appeal that Prada has with their design aesthetic, too.

CR: If you could describe your personal style in three words, what would they be?

CR: What advice would you give to other aspiring designers or anyone looking to get into the field of fashion?

DP: Believe in yourself first and foremost, because if you don’t, nobody else will. Believe in your craft and know your worth, stay positive, and never stop learning. In this industry, everything changes.

Get a peek of DraKar Parker’s work in the gallery above. You can keep up with him or get in touch about his modeling, fashion, and cosmetic enterprises via his Instagram, or by scheduling an appointment at Studio 900.