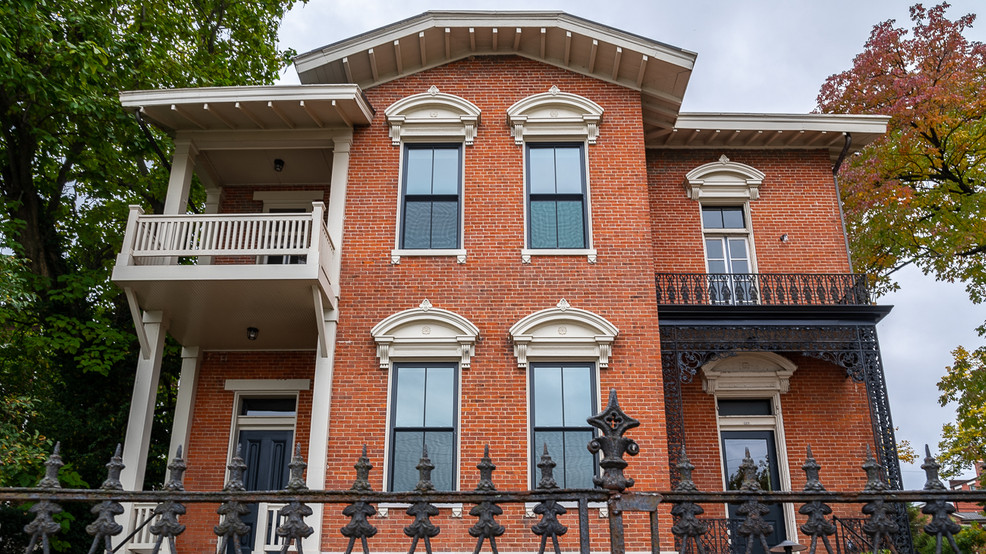 The Skiff House was built in 1850 along Riverside Drive in Covington's Licking River Historic District. At some point, the house was subdivided into four apartments and stayed subdivided until a recent renovation restored the house to a single-family dwelling. With high-end finishes and unparalleled views of Downtown Cincinnati, it's one of the most coveted places to live along the river. It is located at 320 Riverside Drive, right next to George Rogers Clark Park. / Image: Phil Armstrong // Published: 10.18.20
SEE MORE

Inside the Magnificent, 170-Year-Old Skiff House With a View of Downtown

Few streets in the Greater Cincinnati area attract more photographers and admirers than Riverside Drive in Covington's Licking Riverside Historic District. If you've been there before, you already know why it's universally beloved. Lined with trees and park benches, and anchored by some of the most picturesque homes Covington has to offer, the street enjoys a front-row seat to Downtown Cincinnati's iconic skyline much the same as a Diamond Club member would enjoy a seat behind home plate at Great American Ball Park.

Though the sidewalks are public and open to all, only a fraction of the area's population has been privileged enough to call Riverside Drive home. 320 Riverside Drive, a two-story house at the edge of George Rogers Clark Park, was subdivided sometime after it was built in 1850. There, four lucky tenants in four different apartments called the house home for years.

Local architect and Miami University professor John Becker and his family bought the subdivided building, known as the Skiff House, decades ago on the advice of his father, Sheal. Even then, they knew what they had was special.

"Sheal had a great love for Northern Kentucky having grown up in Ft. Thomas, as well as a keen eye for unique real estate," says John. "Our family purchased the Skiff House in 1980 where it had been maintained as a four-unit rental property. As an architect and practice that focuses on residential projects, I had always known this home was an undiscovered gem among the distinctive properties in the Licking Riverside Historic District."

When he began thinking of the next phase of 320 Riverside a few years ago, John decided to consolidate the apartments into a single-family house again. However, in the process of doing this, he wanted to preserve as much of the character of the old house as possible while guiding it into the 21st century.

According to John, there's hardly a surface that wasn't touched in some way. He resolved structural issues, laid out the interior in a new way, restored all the details that give the house character, added a carriage house behind the house, and created "a new, idyllic courtyard" between the two houses. The home also received all new HVAC, plumbing, electric, roof, windows, and landscaping.

Of course, what historic renovation doesn't uncover a beautiful brick wall yearning to be left exposed? 320 Riverside has them, as well as elaborate plaster moldings that were lovingly restored. Pocket doors, which weren't previously working, now slide with ease as if they were brand new.

John wasn't alone in his crusade to fix up the old home. Carey Warman provided design consultation, and Legacy Custom Builders acted as General Contractors to make the dream a reality.

"The house continued to surprise and delight us with unexpected discoveries. The design layout provides a sense of history while allowing open space living and a backdrop for details such as dramatic contemporary lighting," John explains.

To find the right buyer, John tapped Huff Realty's Rebecca Weber and Joy Amann. He clearly made the right choice as the new owners worked with John to influence the final design and have recently moved into the home as of this writing.

"We are fortunate to have secured an imaginative buyer early in the project who did much to cultivate our work and encourage this marriage between past and present," says John.

For John Becker and his family, the renovation of 320 Riverside was a personal labor of love. Having owned the building for 40 years, he'd invested much of himself into the process of fixing it up for its next owner. He's pleased with the work he's done—work he knows Sheal would approve of if he were around today.

"I'm confident my father would have been extremely proud of the legacy he and our family will leave for this neighborhood that we all love."

See the historic Skiff House's new look in the gallery above. NOTE: the carriage house was not finished when we toured it, so the photos are of the Skiff House only.