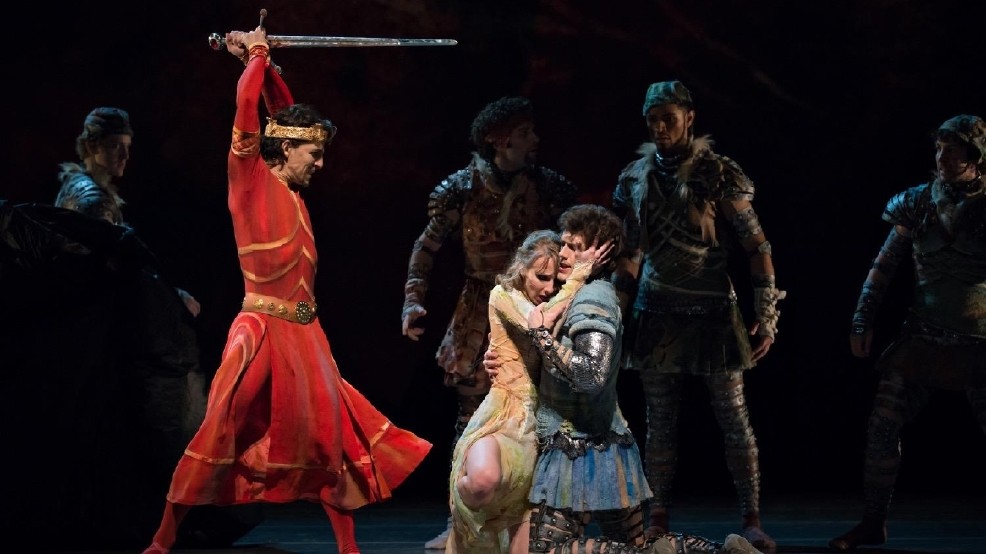 Nothing Says Valentine's Day Like Sword Fighting, Pyrotechnics, and Betrayal

We had you at sword fighting and pyrotechnics, didn’t we? Well, even if we didn’t, there’s plenty of other reasons to grab your tickets for King Arthur’s Camelot.

It's An Original Production: Camelot was created by and for the 50th-anniversary season of the Cincinnati Ballet in 2014. Artistic Director and CEO Victoria Morgan crafted the original choreography, while original music was composed by Canadian composer John Estacio.

Don’t think any of that matters? It does. Just listen to Cervilio Amador, who will be reprising the role of King Arthur: “There’s a feeling of ownership I have over the role, because it was created for me. I was involved in the early process of interpreting the musical score for this ballet. No one had ever danced to this music before. It feels very personal, and now I have the opportunity to do it again.”

It’s About King Arthur: The Arthurian legend has been rendered in nearly every artistic medium. Rightfully so, as it’s a compelling tale about a figure who must assume, and then realize the limits of power. There’s also magic, turmoil, romance, and betrayal. It’s basically a smorgasbord of human drama. And it’s very good.

But It's Not The Same As It Was In 2014: Though the first production was widely praised, Morgan made some tweaks to the 2017 show. “Victoria is persistent. She wants to have a particular look for the ballet and tell the story correctly,” says Amador. “She always wants to keep pushing. And now that we’ve done it before, she can change parts to make them better.”

And It Isn't A Ballet You Would Have Seen At All Two Decades Ago: When you think of ballet, if you think of a bare stage with dancers clad in skin-tone tights, you should know that’s not how it is anymore. Artists like Morgan (and especially Morgan) have turned modern ballet into spectacular theatre.

...And Pyrotechnics, And Props, And Sets, And Costumes: This falls under the whole “modern ballet” thing above, but maybe it even goes a bit further than that. I mean, most “modern ballet” doesn’t feature pyrotechnics, right? Maybe projections and puppets and magnificent sets and awesome costumes. Maybe even sword fights, if the production calls for it. But fire? Hmm.

But It Also Means A Mature Drama Led By A Fabulous Dancer: You might not think of ballet dancers as actors, but they are — and they have to be very good. Amador certainly is. But it took him a lifetime of experience to become that way. “It’s a role that you need maturity to perform. You go through all phases in life when you play Arthur. In the beginning he’s a teenager, happy n' light and carefree," explains Amador. "Then he grows and marries and learns to love. And then you have to be a leader of the knights. Finally, toward the end, there’s understanding and forgiveness. I think those feelings are harder to perform or understand when you’re young, so its definitely a role that had to come to me at the right time.”