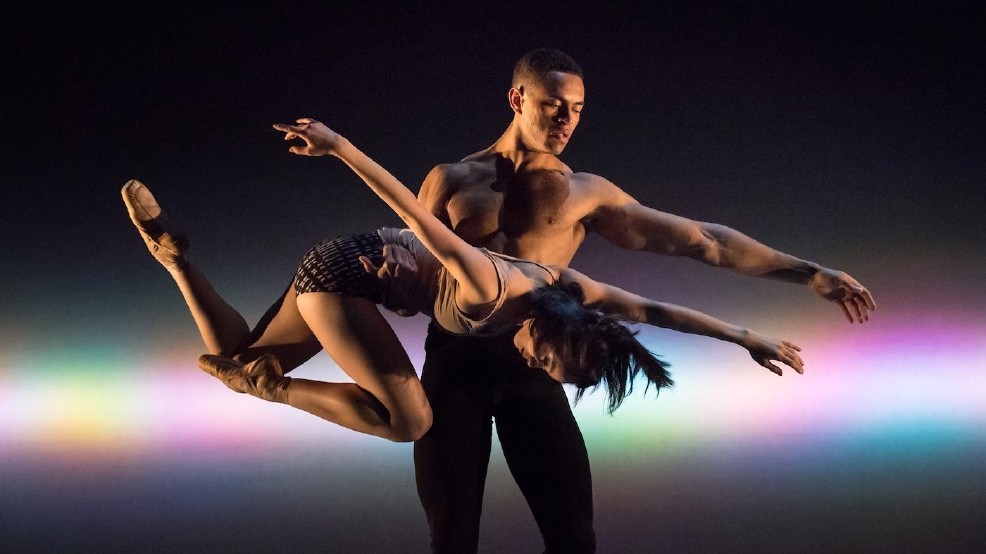 After An Incredible Season, Is It Possible Cincinnati Ballet Saved The Best For Last?

There’s only one bad thing about spring in Cincinnati. It signifies the end of the ballet season. And that, my friends, is a travesty. We will have to wait another 4+ months before we see the dancers on stage again. (Tear.)

Thank goodness there’s one more program, though. And even better news is there are multiple opportunities to see it.

New Works features four premieres by four different female choreographers. (Did someone just say “Who runs the world?” Or am I hearing things?)

Let's prep you for New Works. Here's what you can expect:

The background:
Archibald has partnered with street artist Swoon to create one-part ballet, one-part 3D art installation. “I had to look at the materials that Swoon gave me and bring them to life, along with the dancers,” explains Archibald. The set is made up of deconstructed ship vessels. And the props include poles, sticks, flowing sheets, and more. The message is one that wades deep into the issues of global warming, “exploring the rapidly changing relationship between people and water.” [per the Ballet’s website]

My take:
It’s a powerful piece that will move you and, more than anything, impress you. I don’t have an official count for its length, but I’d venture to say it was approx. 25 minutes long. How the dancers are able to remain standing after what they’ve done on the stage is just proof at how talented and athletic they are. Honestly, I challenge a professional athlete to do what they did. Because, well wow. Just wow.

The background:
Inspired by the soundtrack of "The Elephant Man," Morgan has choreographed a piece that examines the relationship between those who fit in and those who don’t. “As I heard [the music], it was impossible to avoid an idea of some strange creature,” said Morgan. The main character is called “The Chosen One,” and then there’s “The Outsider.” The dichotomy between the two is where this piece thrives.

My take:
It’s dark. It’s like a more serious, intense version of "Beauty and the Beast," but maybe without the love story or a funny candlestick. While ballet is often considered beautiful, Morgan’s choreography forces us to look at some of the uglier sides of life. It might even make you a bit uncomfortable, but that's kinda the point.

The background:
“Karass” is a word coined by Kurt Vonnegut in "Cat's Cradle." It refers to a network or group of people that, unknown to them, are somehow linked by a higher power. Basically, it’s about connections & relationships. For this dance, Britt was inspired by the loss of a loved one. She wants to showcase how one life can touch and/or be touched by many. And even if a story ends, it’s still a part of us — forever.

My take:
I’m glad I read about Britt’s inspiration, because my mind traveled in a totally different direction, a rated M, for “Mature” audiences only, direction... I mean, the intensity/ intimacy/ passion amid the dancers had me wanting to cover my eyes at times. I had thoughts of, “Should I even be allowed to witness this?” But that’s the blessing of art. Art can explore, at such a profound level, the things we refuse to see (or just plain, can’t see) and bring them to light in a way that makes us feel. It forces us to confront ourselves and our deepest desires.

The background:
Let’s start with the fact that Ochoa is an acclaimed international choreographer who likely has daily requests to create new works for esteemed companies around the world. So basically, we are really lucky to have her U.S. premiere for “Eros Redux” in the New Works Series. The ballet is “about desire and why we are looking for the other half, because one day, a long time ago, we were separated from the source,” Ochoa says. “And in that source, we were complete. So our curiosity, and search, is because we feel incomplete. But that's why we're human beings, because we keep searching.”

My take:
Yeah, what she said. I could say more, but I'd rather leave you with a bit of intrigue and mystery. And really, you should form your own opinion.

Which brings me to New Works is performing April 20-30 at the Aronoff Center inside the Jarson-Kaplan Theater. (It’s the smaller theater, fyi.)

Last thing: Don't forget to scroll back to the top and view the photo gallery. If my words have not done enough to excite you about New Works, the photos surely will.

Wait, one more thing! Normally, I like to highlight specific dancers — the stand outs, if you will. I could do that again. But in this case, I don't think it's fair to give props to one dancer over another. They were all pretty darn incredible. And, at the end of the day, even if one dancer shines brighter than another, it's a team effort, from the dancers to the choreographers to the costume designers to the director to even you, the audience. It's all of us (mostly them) that make the experience of witnessing live ballet so special.

So, congrats on a wonderful season, Cincinnati Ballet. I will miss you during these long months spring/ summer months. But I look forward to your return in September.