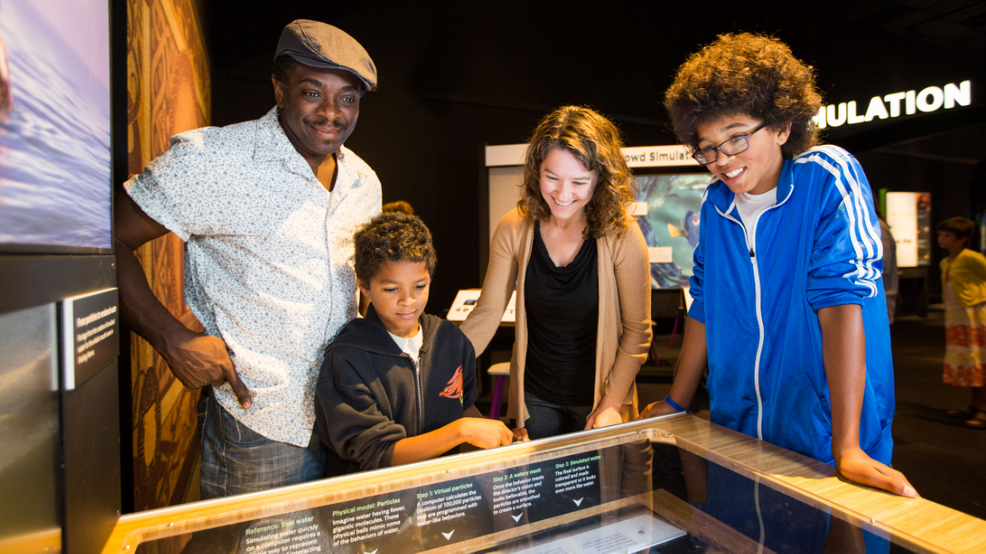 Kids are almost out of school! If you're wanting to keep them entertained, educated and experiencing nature from the comfort of AC, check out all that the Cincinnati Museum Center has coming up this summer!

There are two free exhibits making their way to the Cincinnati Museum Center: "America's Epic Treasures featuring Preternatural by Michael Scott" and "Our Shared Story."

"America's Epic Treasures" features 32 major works organized around Earth's four natural elements: fire, water, air, and earth. "The immersive art exhibition showcases the beauty of natural landscapes and the destructive and rejuvenating nature of the elements," the Cincinnati Museum Center says. The pieces offer vibrant colors and skillful execution to create dynamic textures and compositions that are nothing short of mesmerizing. Plus, Scott's onsite field studies included in the exhibition give you a look into his process as an artist.

"Scott's paintings offer a place where the natural world, the human world, and the world of the spirit or the soul can commingle," says MaLin Wilson-Powell, art historian and author. "Together they comprise an arena that oscillates between what is there and what is not there, what the artist brings to it and what the viewer brings to it."

The exhibition will also include 12 pieces from Cincinnati Museum Center’s own collections featuring local landscapes by artists such as Rudolph Tschudi, John Caspar Wild, William Louis Sonntag, and Robert S. Duncanson. These pieces are mainly from the 1800s and include views of Cincinnati from across the river in Covington, Newport, and Forest Hills.

“This is a rare opportunity to see, together in one place, expressive paintings of 19th century life in and around Cincinnati,” says Kate Bonansinga, director of the School of Art at the University of Cincinnati’s College of Design, Architecture, Art and Planning. “It reminds us of how our city has grown and changes, and how nature offers a reprieve to urban life, both then and now.”

“Together with the Cincinnati Museum Center and our various partners, we are honored to bring an illuminating exhibition that highlights the vibrancy, inclusivity, and complexity of Jewish history and culture in the Queen City,” says Sarah L. Weiss, CEO of the Nancy & David Wolf Holocaust & Humanity Center. “From the creation of the Chestnut Street Cemetery in the 1820s to the diverse and growing community we have today, the city we love has been and will continue to be deeply influenced by the Jewish community.”

The exhibition includes a look at suitcases, trunks, and immigration and naturalization papers to help tell the stories of Jews immigrating to Cincinnati. There’s also a basic introduction to the tenets of Judaism and the Torah, as well as a table set for a Passover seder to symbolize the importance of family and traditions.

“‘Our Shared Story’ is a fitting name for this exhibition because the story of Cincinnati, the story of who we are as Cincinnatians, has been so intrinsically shaped by our Jewish community,” says Elizabeth Pierce, president and CEO of the Cincinnati Museum Center. “With this exhibition we want to share Jewish culture and celebrate, together, the contributions that have built and are building the city we love today.”

Head out on a cross-country visual adventure into the hidden wonders of the natural world with the Morgan Freeman-narrated film “Into America’s Wild.” The film takes you on an adventure throughout the little-known landscapes of North America via kayak, bike, train, hot air balloon, zipline, kite surfboard, and more.

“Stunning aerial photography makes every seat feel like it’s floating along the Kelp Highway, in the shadow of Utah’s sandstone canyons and in the midst of a thundering herd of wild mustangs,” says Dave Duszynski, vice president of featured experiences at the Cincinnati Museum Center. “The OMNIMAX Theater effectively immerses you in America’s wild.”

All the animated faces you love are also sticking around the Cincinnati Museum Center as it extends “The Science Behind Pixar” exhibition through Labor Day. The littles (and maybe even you grown-ups!) will love getting face-to-face with Buzz, Dory, Mike, Sully, and Wall-E!

“The exhibition has been such a hit with guests of all ages but you can tell it clearly holds a place in the hearts of those people who grew up with these characters and these films,” says Pierce. “Now they get the opportunity to know them on another level.”

The exhibition is the perfect place to stop as you’re out and about this summer, to reminisce in your own nostalgia or to introduce your own children to characters they’ll love.

The exhibition is more than just fun, though, it’s also interactive. You’ll get a deeper look at the production pipeline used by Pixar’s artists and computer scientists, as well as a look at the STEM concepts behind modeling, rigging, surfaces, sets and cameras, animation, simulation, lighting, and rendering. With more than 50 interactive elements, a visit will give you the chance to:

On top of all the exhibits that make their way to the Cincinnati Museum Center, there is plenty of year-round fun that you can enjoy no matter the season. If you’re looking to plan your next family outing, be sure to check out the Cincinnati History Museum, The Children’s Museum, and the Museum of Natural History & Science.

A big thanks to The BMW Store for keeping Amy on the Go!