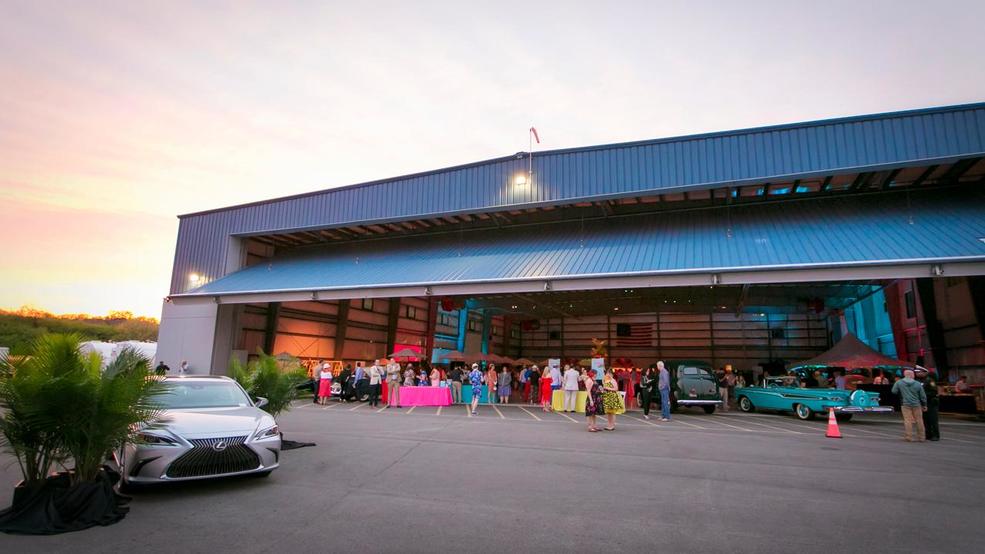 Past events like the Ballet's Club B and UC DAAP's 2019 spring fashion show were held inside the hangar. / Image: Mike Bresnen // Published: 5.27.19
SEE MORE

Unless you’ve been actively avoiding the Cincinnati event scene over the last year, you’ve probably noticed the airplane hangar that organizations like Film Cincinnati, UC DAAP, and the Cincinnati Ballet have been using to host grand, photogenic events. We’ve even covered a couple of those events on this very site.

That hangar, the main feature of Waypoint Aviation at Lunken Airport, didn’t actually set out to become a premier destination to host huge parties. In fact, it’s main purpose is something entirely different: it’s a repository for aircraft that need servicing—a place pilots store their planes while Waypoint technicians work to get them back in the air. The facility is open 24 hours a day, 7 days a week, and is a full-service fixed-base operation.

“It was never something that was in the back of my brain. I never thought about it being an event space,” says Mark Davis, President and CEO of Waypoint Aviation.

So how’d a hangar at Lunken Airport taxi toward the runway for local events? For that, we’d need to travel back to 2015.

THE WAY TO WAYPOINT

Waypoint owner Mark Davis went to aircraft technician school in Pittsburgh before getting a degree in aerospace management. Eventually getting his license and becoming a commercial pilot, Mark landed in Cincinnati in 1998. He worked for an airline that ran vacationers to the Cayman Islands and Bahamas for several years before getting into private aircraft management.

That’s when he founded Airtech, a maintenance and repair organization that works on small aircrafts and large business jets alike. It was 2011.

For four years, Airtech operated out of a hangar at Lunken Airport. By 2015, Mark was ready to grow the business, but he didn’t want to leave Lunken. Because of the airport’s proximity to the city and lack of car traffic (unlike CVG), he sought a way to expand Airtech without flying the coop.

He settled on a 10.5-acre tract of land that Lunken owned and set to work designing the expansion; that’s when the groundwork for Waypoint Aviation truly began.

As construction began, debris from Sander Hall, the former UC dormitory that was demolished in 1991, was discovered eight feet beneath the surface of the soil. After navigating its clean up and constructing a “geo pier” upon which Waypoint could be built, crews spent the next three years erecting the hangar and building. It was completed by January 2018 and opened for business.

Of course, that was the business of being a one-stop shop for pilots who needed to refuel and repair their aircraft.

The massive 42,000-square-foot facility, which acts as a type of miniature hotel (sans beds) for pilots, offers free Starbucks, Graeter’s ice cream, and popcorn as well as a resting lounge, laundry service, and showers for those who need to recharge and refresh themselves as well as their planes. The hangar is equipped with the world’s largest single-panel tip-up door, weighing 30,000 lbs. and measuring 120-feet wide. Why such a huge door? The 40-foot ceiling inside the hangar was designed to comfortably hold the largest private business jet currently flying: the Gulfstream G650. Mark doesn’t want to turn someone down because their jet won’t fit inside the facility.

It’s no wonder, then, that a privately-owned space of that magnitude with room for 600 parked cars on asphalt just outside the hangar would be an attractive space for someone wanting to bring up to 2,200 people together for a party. And that’s exactly what happened.

In the summer of 2018, Film Cincinnati approached Waypoint about using the hangar for a gathering. Seeing an opportunity to utilize his space in a new, unconventional way, Mark let them rent it out.

“It went off without a hitch. It went great,” he says. “After that, the flood gates were open.” The space accommodates thousands, is neutral enough to not distract from the event's theme, and provides a unique experience other venues around town don't offer.

The Cincinnati Ballet’s Club B party and UC DAAP’s fashion show were among the other events that followed Film Cincinnati's initial gathering. And the sky's the limit for Waypoint; more events are cleared for takeoff inside the hangar in the future, too.

See inside the full-service operation and photos of parties held at Waypoint Aviation in the gallery above. For more information about Waypoint itself, head to its website.