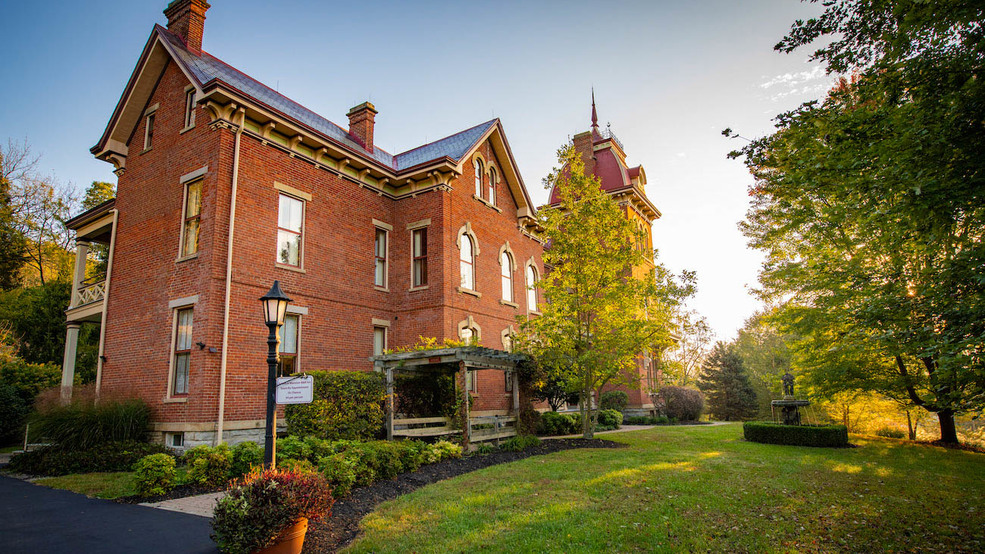 The Schenck Mansion Bed & Breakfast is a restored home from the 1800s with ornate finishes, comfortable accommodations, and seven rumored spirits wandering its residence. Owners Jerry & Lisa Fisher say the souls they regularly encounter—which include a young woman, a soldier, an elderly woman, and the Schenck family that originally owned the home—are all very friendly, unlike many ghosts portrayed in pop culture. ADDRESS: 206 W Turnpike Street, Vevay, IN (47043) / Image courtesy of Oval Creative LLC // Published: 2.5.19
SEE MORE

My wife awoke from uneasy dreams after a night in the Schenck Mansion Bed & Breakfast. She had been bothered by “a cat—or something” that pressed on her feet during the night, as well as dreams of women in period costumes tidying up the room. We nonchalantly dismissed it all and went downstairs.

Over a delightful breakfast of Eggs Benedict, stuffed strawberry French toast with cream cheese, and hash brown casserole, co-owner Lisa Fisher explained that my wife’s experience was not uncommon, as the mansion is rumored to be inhabited by no less than seven spirits.

“They’re all very kind and very nice,” explains Fischer. “They’ve never actually intentionally scared, or tried to scare, a guest—although people are sometimes startled when they see them. But it’s just not like the hokey stuff you see on TV. They are just wonderful people... well, not ‘people.’ They are just wonderful souls. I like them.”

Sarah has been described as a pretty young woman. She lived in a cabin that existed on the grounds before the mansion was built. Allegedly, she harbored a soldier, possibly an African-American man, and, for that, the townspeople burnt the cabin down—with both of them inside.

The Soldier's name could be ‘Ed,’ as Fisher often found letters written in the dust of their initial renovations. The letters would often be written on a ceiling, or other spots humans couldn’t access without assistance.

Benjamin Franklin Schenck was the son of a wealthy hay baron in the steamboat era and built the home in 1874. Celestine, his wife, as well as two of their daughters—Eugenia and Corrine (another daughter, Justine, does not inhabit the home any longer)—maintain presence in their former home.

An elderly woman spirit has often been spotted, but is yet to be identified.

Fisher and her husband, Jerry, purchased the home in 1998 and spent two years refurbishing it. Today, it’s a stunning and well-kept boutique property. Business is going very well, despite (and occasionally thanks to) their additional residents. They’re booked up most weekends, as well as around key local festivals and holidays. Peak season is May through early November.

Fisher notes that she never promotes the property’s historic guests, and you won’t find mention of them on their website. But she points out that their presence is well-documented and easily searchable online. She’s also quite open to sharing the multitude of stories she has about interactions with the spirits.

She also says the spirits regularly alert her if something is wrong. “They’re really good with electronics and will turn something on to let me know if something isn’t right. Then I go into the room, fix the problem, and they’ll shut the device off.”

She goes on to add, “I’ve always felt really comfortable with them there. It’s not a scary situation, not at all.”

The Schenck Mansion Bed & Breakfast is 55 miles southwest of Cincinnati. It's address is 206 W Turnpike St, Vevay, IN 47043. You can plan your stay by visiting their site.