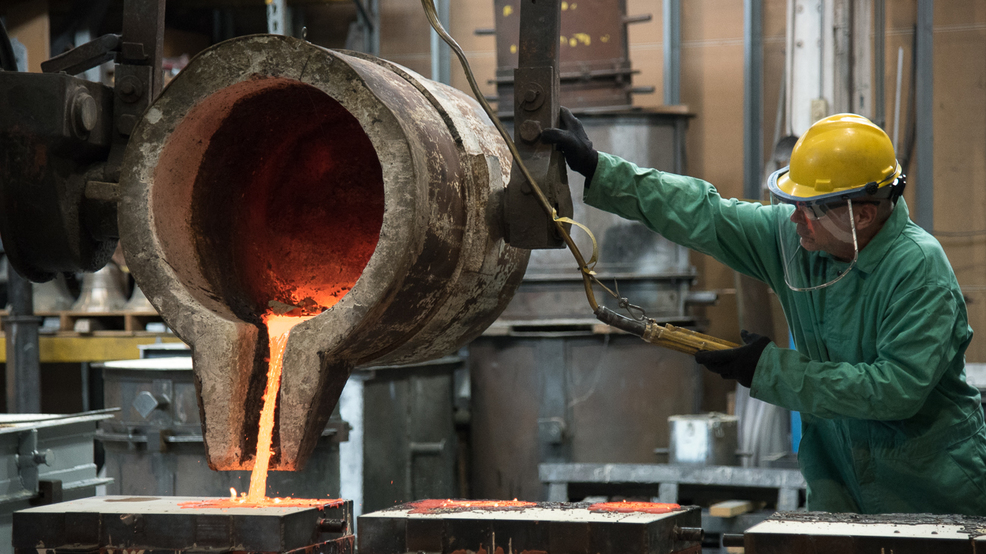 It is rare that the public is able to witness the casting of a Verdin bell inside the Kellogg Avenue foundry. Molten metal is heated to extreme temperatures and carefully poured into casts by trained technicians wearing protective outfits. Cincinnati Refined was invited to witness a pouring on September 27th, 2018. / Image: Phil Armstrong, Cincinnati Refined // Published: 10.19.18
SEE MORE

While many Cincinnati landmarks are well known to locals and visitors alike, one over-175-year-old industrial institution flies under the radar.

For six generations, The Verdin Company has cast bronze bells, some up to 70,000 pounds, in Cincinnati. The company has grown over the (many) years, expanding from bells to now installing and servicing large municipal clocks, post clocks, bell towers, organs, and carillons all over the world. Recently, their factory on Kellogg Avenue prepared pieces for shipment to Omaha, Hawaii, Washington D.C., Canada, Houston, and elsewhere. Their works ring true throughout the world, including China, Paraguay, and Estonia.

Throughout their over-175-year history, they’ve completed an astonishing 55,000 installations, including a carillon at Disney’s Epcot Center. Last year, in honor of the New York Stock Exchange’s 225th anniversary, they cast the replacement for the famed closing bell. The bell was an exact duplicate of the original, cast to ring the exact same tone so that no one would notice the change.

Another notable bell is nearby, in Newport, Kentucky. The World Peace Bell was Verdin’s largest ever, at 70,000 pounds. The 12-foot wide bell was the largest swinging bell in the world, until 2006.

On any given day, the Verdin factory manages some 100 orders at a time, with workers welding, polishing, painting, and fabricating bells, clock towers, clocks, and replacement parts. Even the parking lot is a testament to their work with massive clock faces, a series of tubular bells, and a single column carillon sitting among the pick-up trucks. If someone were truly lucky, since they don’t offer tours, they would get to see them pour 2,000-degree molten bronze from the furnace into a mold as they cast a new bell.

It all started in 1842 when French immigrant brothers Francis de Sales and Michael Verdin installed a clock and bell equipment in Old St. Mary’s Church in Over-the-Rhine. (That was installation #1 of 55,000.) It’s fun to wonder if the elder Francis could have even imagined in his wildest dreams that his great-great-great grandkids would be completing installations 175 years later.

“We’re the oldest family-owned company in the state of Ohio,” notes Tim Verdin, the Vice President of Manufacturing. “And I think we’re the 51st oldest in the entire United States.”

“We strive to extend that family atmosphere throughout our company,” adds Tim. “We’re a large enough company to be stable, but small enough to keep an open-door policy for all our employees.”

Even at 175-years old, the company shows no signs of slowing down. Over the years, they have purchased or acquired seven other bell and carillon companies and continue to produce hundreds more installations per year.