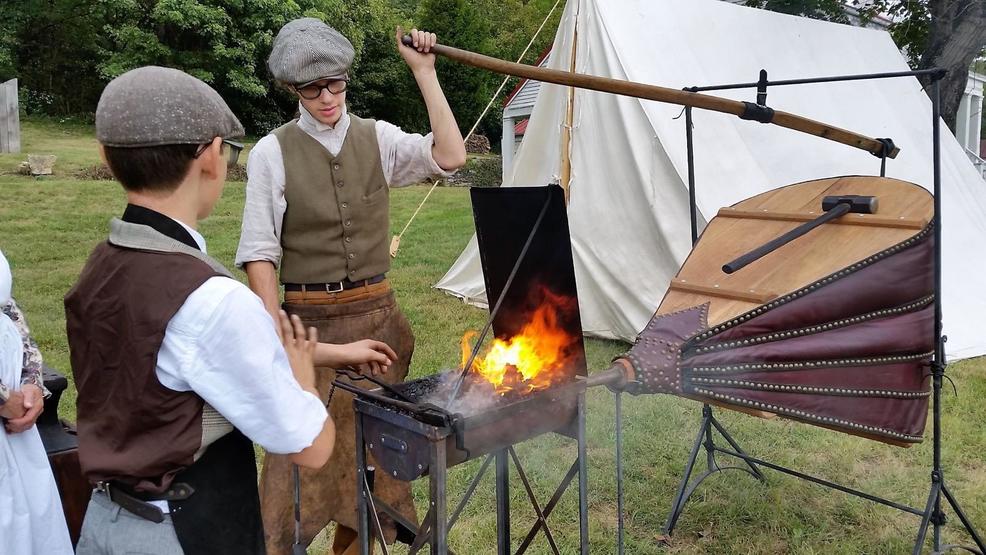 At Musée de Venoge, you'll learn about what life was like in the early 19th-century, when Swiss immigrants settled the region immediately to the west of Cincinnati. Period actors demonstrate the domestic arts and early gardening methods, in addition to making some pretty fantastic-looking breads, cheeses, and pies. / Image courtesy of the Switzerland County Historical Society // Published: 4.1.18
SEE MORE

Two Reenactment Sites That&rsquo;ll Show You What It Took To Settle Around Cincy

Too much liquor and not enough wine.

That, in a nutshell, is what prompted the settlement of Indiana's Switzerland County by Swiss immigrant John Dufour in the 1810s. He heard about the lack of wine and general booziness (er, intemperance) in this corner of the world and saw an opportunity. Thus the land immediately to the west of Cincinnati was purchased and subdivided. By the 1820s, it was home to the first commercially successful winery in the nation—and expanding rapidly as a result.

200 years later, you can see what that fascinating time was like thanks to these two wonderful historical reenactment sites.

One of the area's first settlers was Jacob Weaver, who built the cottage now called Musée de Venoge after a Swiss river of the same name. As for the “Musée” part, it was earned in 2010 when the cottage was found to be architecturally unique and deemed worthy of a polish.

Its architectural uniqueness, I’ll grant you, is not obvious on its face. But dig a little deeper (or listen to the period actors on-site) and you’ll see the cottage’s timber frame poteaux-sur-sol and brick nogging for what they are—distinct markers of a distinct point in time.

Those period actors, by the way, are why you should visit Musée de Venoge. They demonstrate the domestic arts and early gardening methods of the 19th-century settlers. That includes some pretty fantastic-looking dishes—breads, cheeses, pies, etc.—whose preparations are the same as they were back then.

Best of all, the Musée de Venoge recently received a grant from the Indiana Office of Tourism in the amount of $75,000. The grant has allowed the construction of an authentic barn abutting the cottage, to be used for new exhibits and fun programming. The barn will be open in July.

If you’re looking for ever-so-slightly more contemporary vibes, Switzerland County’s Thiebaud Farmstead is your best bet. Its working hay press barn, dated from 1843, was painstakingly reassembled in 2016, and it's a pretty big deal.

The 3-story, animal-powered machine used a pulley system to turn a massive iron screw, with the capacity to press 300 pounds of hay. It was a revolutionary invention, and by the 1860s it was ubiquitous around the country. But it was patented here, in Switzerland County. Now, fittingly, the hay press is working again, and it's a sight to see.

But that’s not all you’ll see at the farmstead. There’s hearth cooking, quilting, spinning, and sewing. You’ll even see how 19th-century folk did laundry, which is sure to give you a new appreciation for your washing machine.

Musée de Venoge and the Thiebaud Farmstead are open Sunday afternoons and by appointment, with special events held throughout the year. Both are located at undisclosed addresses west and north of Vevay, IN. The Switzerland County Historical Society will be able to point you in the right direction to find them. The Society is located at 208 E. Market St., Vevay, In. 47043.