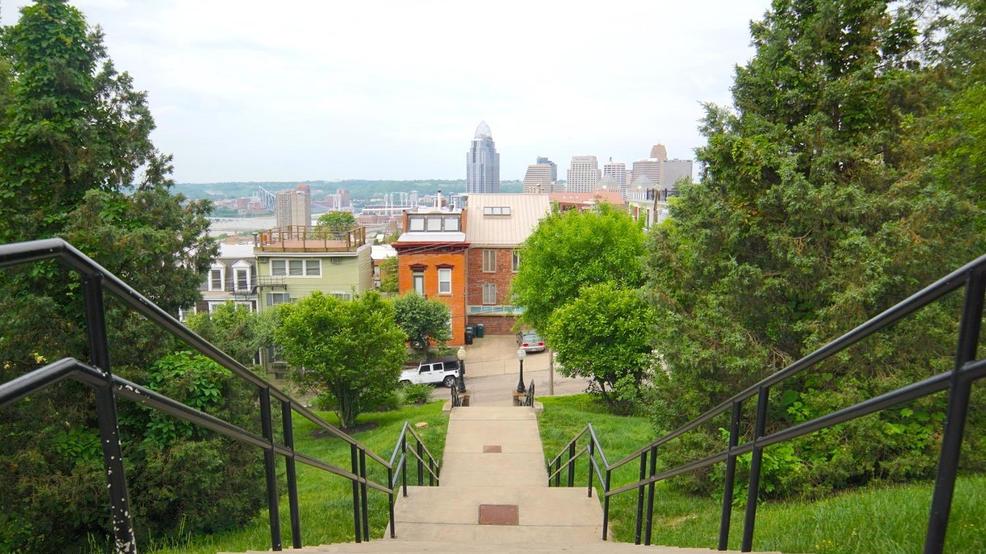 HIKE: So Many Stairs! / AREA: Mt. Adams / ABOUT: From the Art Museum to Downtown, then back up to Eden Park using all of the stairs (learn more about the path in the story). / Image: Brian Planalp // Published: 5.19.17
SEE MORE

Here’s a thought, the next time you’re lying in bed for far too long on a crisp Saturday morning, endlessly swatting at your Instagram feed, don’t.

Instead, get reacquainted with the city you love so much. And not just the seething thoroughfares, though those are a good bet too. Go down the side streets and the alleyways. Go through parks and the parking lots. Find a bit of beauty in the mundane. Get lost in this urban jungle we call home. In short, get to a sidewalk, pick a direction, and go.

Here are a few loops to consider:

Directions: First things first, try not to be overwhelmed smelling the cumin, curry, ginger, and frying oil emanating from Ambar. Next, walk down Clifton Avenue to Lafayette Avenue, just before the hill, and enter. Behold, old Clifton. (Man, 19th century rich guys sure were rich.) You’re at Storm Park before you know it. Enjoy the view. Then descend Lafayette, which becomes delightfully serpentine. Walk up Ludlow, passing the adorable Bowdie and Dunbar parks. You’ll know you’re done as soon as you smell the curry again.

THE BRIDGES OF KENTON COUNTY
The Banks to Covington to Newport

Directions: Once you're finished taking pictures of the Roebling Bridge, cross it. Take a minute to look around the Licking River Historic District before heading to Mainstrasse. Proceed across the Licking River to Newport, where you should spend much of your time wandering the row houses on the east side. Finally, cross the Ohio River once more at the Purple People Bridge, and return to The Banks for a frothy post-hike beverage.

Directions: Proceed down Edwards Road (which eventually turns into Grandin Road). Aren’t the houses spectacular? Yes, they are. At O’Bryonville, resist the urge to stop in The Bonbonerie, then head to East Walnut Hills. (Aren’t these houses spectacular too? Yep.) Spend some time loitering around Woodburn Avenue before returning to Hyde Park. And as long as you’re passing by once more, maybe it’d be alright to reward yourself with a Bonbonerie pastry. You earned it.

SO MANY STAIRS!
Mt. Adams

Directions: Pull into the parking lot near the Cincinnati Art Museum where the stairs descend behind Elsinore Arch. Descend them, then have your fill of Downtown. At 4th Street, head east to Lytle Park and make sure beardless Lincoln is still there. Walk up that long ramp beside Columbia Parkway to the erected stairway which heads back up to Mt. Adams. Do your best Gollum impression and climb, climb, climb. Enjoy the cityscape before walking towards Eden Park and passing by one of the only round-a-bouts in Cincinnati. (Praise be round-a-bouts.) Check out the conservatory and the cherub-weaning wolf, then circle back to Crowley’s.

Directions: Pry your eyes away from the beauty of Pendleton and refocus them on the beauty of Prospect Hill as you ascend Highland Avenue and weave over to Mt. Auburn. Head straight across Uptown using East McMillan. Leave U Square in your dust, then follow Central Avenue down the hill to the Brighton area. That big thing on your right? That's the Mockbee. It's sweet. Come back to that when you're not all sweaty from your urban hike. As for the rest of the hike, it's pretty standard. You're in OTR now, you can take it from here.

Directions: After a little fortification at The Littlefield, head north on Hamilton Avenue until your feet fall off. Don't worry, there's plenty of fun things on the way, like Shake It Records and Urban Artifact. Once you reach The Comet, you've gone about halfway. (Not really, but I just want to give you hope.) After you walk and walk and walk, you'll suddenly arrive in College Hill. Go to Brink Brewery (or perhaps somewhere that won't make this list — and me for writing it — seem overly obsessed with alcohol). After College Hill, suffer a few minutes on North Bend before taking Argus Road to Groesbeck Road. From there you can cut through Spring Grove Cemetery and poof! You're back in Northside.