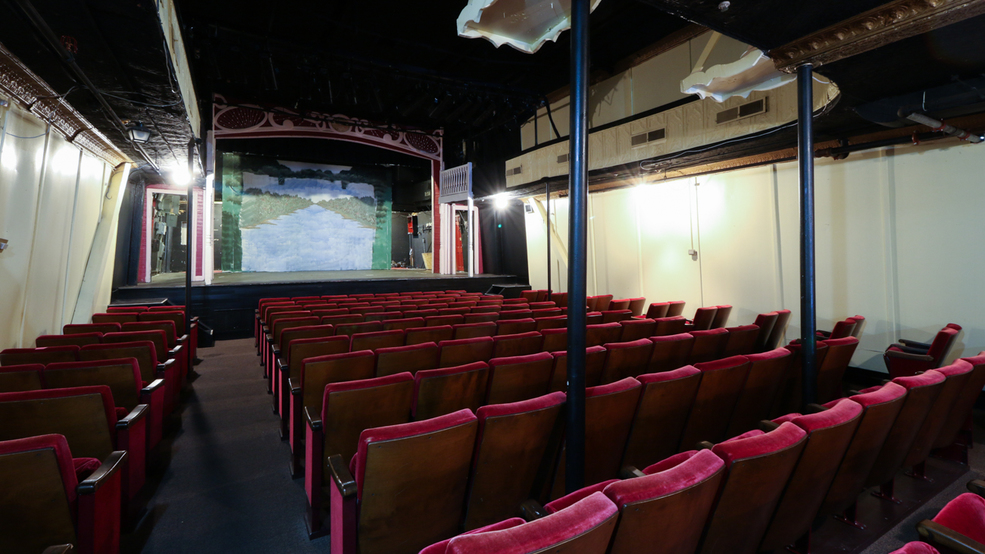 Showboats were a tradition that can be traced back to 1816, when a cargo ship was repurposed as a means of transportation for a traveling theater troupe. The Floating Theatre was the first purpose-built showboat. Launching out of Pittsburgh in 1831, she kicked off a trend of vessels equipped with theaters. The Showboat Majestic is the last of these floating venues. In 1923, it too launched out of Pittsburgh, traveling through American rivers and putting on shows. / Image: Ronny Salerno // Published: 2.22.19
SEE MORE

A Walk Through the Historic Showboat Majestic Before It Left

I'd been running by the Showboat Majestic for years. Even long before those days of jogging along the riverfront, I'd noticed it. Despite all I had learned (and written) about Cincinnati history over the years, though, I never knew the boat was a floating theater until after the last curtain had been drawn.

Cincinnati is a city with a proud riverboat history—a place that idolizes that heritage at times. Tall Stacks came and went, along with several other paddle wheel-backed restaurants, but riverboat excursions and water taxis still operate between the Ohio and Kentucky riverfronts. There’s no denying that riverboats and their history are intrinsically linked with Cincinnati’s identity.

The Showboat wasn’t a steamship, though. In fact, it’s not necessarily a “ship” at all. It has no motor, no means of locomotion. An external means of conveyance, the towboat named Attaboy, once pushed it up and down American rivers. Since 1967, though, the floating theater was permanently moored on Cincinnati’s Public Landing.

Showboats were a tradition that can be traced back to 1816, when a cargo-carrying keelboat was repurposed as a means of transportation for a traveling theater troupe. The Floating Theatre was the first purpose-built showboat. Launching out of Pittsburgh in 1831, she kicked off a trend of vessels equipped with theaters that brought entertainment to communities scattered along the banks of rivers in the American frontier.

“Showboating” took a pause during the Civil War as the Union Navy sought to secure essential supply routes, but the tradition continued and expanded after the Confederacy’s surrender. Boats like the New Sensation, Goldenrod, Water Queen, and Princess proliferated a type of theater unique to American culture.

As the nation grew and the continent became connected, technology evolved and the showboat tradition began to diminish. Still, Captain Tom Reynolds (allegedly hailing from a showboat family himself) sought to ply the trade. The last ship he’d construct, the Majestic, launched from Pittsburgh in 1923. For years, Captain Reynolds lived on the boat with his family and used Attaboy to pilot the floating theater up and down Midwestern rivers. Often, he’d pull into a port and stay for a while when academic partnerships brought university students on board to perform.

By 1959, Reynolds sold the ship to Indiana University. Although the school regularly used the historic vessel as a venue for productions, Captain Tom still maintained the boat. In December of that year, he was killed after being thrown from the tow ship Attaboy. It’s suspected that the boat’s engine “kicked.”

The United States Coast Guard would go on to usher in new regulations concerning wooden vessels. Majestic was pulled into dry dock and refitted with a steel hull. At the time, Indiana University also sought to sell the vessel. The City of Cincinnati outbid Louisville for the chance to place the boat on their riverfront.

Before stadiums and sprawling parks lined the riverbanks, the Showboat Majestic sat beneath a bridge off the shores of Cincinnati. A dedicated base of subscribers regularly patronized the floating theater to see productions put on by students from the University of Cincinnati. After the partnership with UC ended in 1988, a nonprofit known as Cincinnati Landmark Productions began producing shows on the boat. From 1991 to 2013, the company (who today operates the Covedale Center for the Performing Arts, Warsaw Federal Incline Theatre, and Cincinnati Young People’s Theatre) operated the boat’s 221-seat venue.

After they left, the City of Cincinnati began looking for a buyer.

Six years later, the city found one. A couple from Adams County, who had a reputation for preserving river history, purchased the ship for $110,000. They moved it in April of 2019 to a spot just west of Manchester. They hope to develop the boat into an upriver tourist and entertainment attraction and are currently working out plans to include crowdfunding a renovation.

After 52 years on the Cincinnati riverfront, the Showboat Majestic departed, but its legacy will float on.

You can lend your support to repurposing the Showboat Majestic at this GoFundMe page. Follow more of author and photographer Ronny Salerno's work by visiting his website, Queen City Discovery.