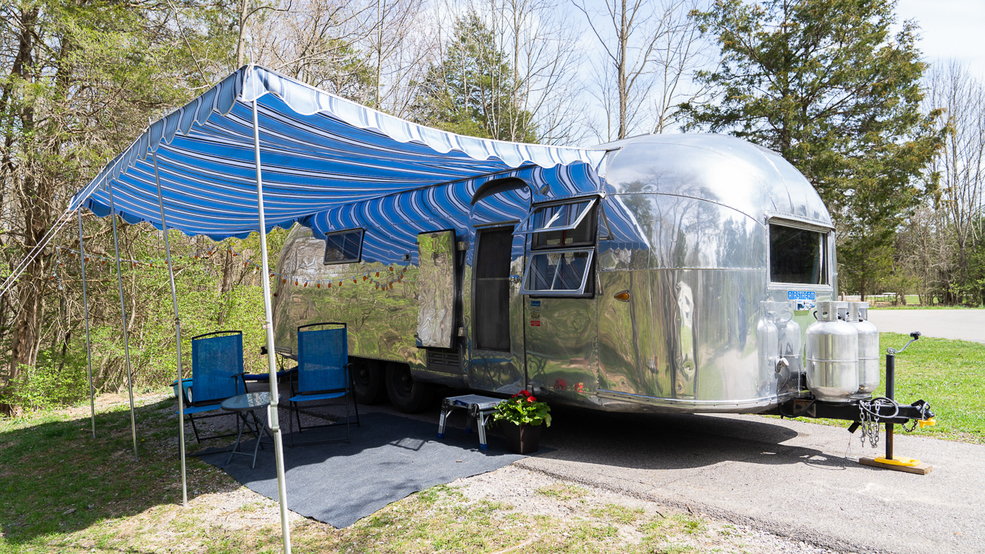 Route Fifty Campers is a collection of five vintage campers that can be towed to various camping destinations around the area. The delightful throw-back campers feature stylish details that capture each respective era, and are perfect for those whose outdoor style favors fashion as well as function. While they are usually used for camping, renters have used them for everything from holiday parties and film sets to lodging and dressing rooms for outdoor weddings. Their tight but smart design and layout make them surprisingly comfortable to do things like cook at the stove, eat at the kitchen table, and relax in bed for a laptop movie. / Image: Josh Purnell // Published: 5.12.19
SEE MORE

To rent from Route Fifty Campers is to step inside a vintage marigold-and-avocado dreamscape, where everything you need to enjoy the great outdoors is suddenly miniature, adorable, and right at your fingertips. We’re not kidding. It’s that magical.

On a recent sunny afternoon, owner Debbie Immesoete arrived at Batavia’s East Fork Lake with three of her fleet in tow: The bite-sized 1985 Scamp, the sensible 1969 Aristocrat Lo-Liner, and the quintessentially chrome-laden 1958 Airstream Overlander. (Most of Route Fifty’s campers are towable with a midsize car, with drop-off/pick-up services for an extra fee.) Immesoete gave a thorough rundown of each unit’s electric hookups, propane tanks, and water pumps before leaving us to settle into our delightfully throw-back, and decidedly non-urban, surroundings.

With stylish details that capture each respective era, the campers are perfect for those whose outdoor style favors fashion and function. In addition to basic amenities and utilities, each comes equipped with dishes, utensils, bedding, awnings, and other necessities for getting outdoors-ish. (Pro tip: String up a few twinkly lights for a scene straight out of The Marvelous Mrs. Maisel.) But these beauties aren’t just for “glamping;” Immesoete says renters have used them for everything from holiday parties and film sets to lodging and dressings rooms for outdoor weddings. With rates that start at $80/night (plus applicable cleaning and delivery fees), it’s a weekend getaway option that won’t break the bank.

The campers are best for couples, small families, and folks like us traveling caravan-style. Their compact nature means space inside is tight — which works well since we’re told camping generally takes place out-of-doors — but a smart design and layout make it surprisingly comfortable to do things like cook at the stove, eat at the “kitchen” table, and relax in bed for a laptop movie. The Airstream even features a stand-up interior shower that could rival many studio apartments.

Renters can choose from a growing fleet that currently includes:

Immesoete started Route Fifty Campers in 2014 after working in the ad industry for more than 25 years. She also owns a small marketing firm called Route Fifty Design and, like many of her renters, she’s drawn to vintage campers because of their unique, thoughtful design.

“I love that they’re made from metal and wood, not plastics,” she says. “They're cool looking on the outside, and even though the many of the interiors have been updated, they still have that Mid-century feel.”

Immesoete realizes there’s a strong nostalgic vibe at play, too. “I think some people remember them from their youth. We hear people say, ‘My grandparents had a camper just like this when I was little!’ They inspire me, and I hope they inspire others, too.”