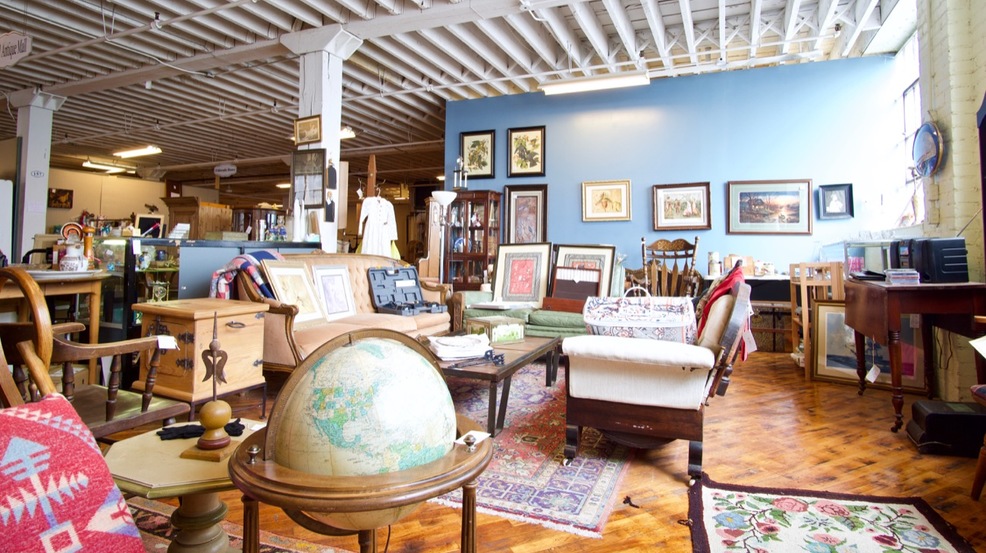 You’ve probably seen RomWeber furniture before—on the auction block, in a university dorm, at famed resorts like Mackinac Island’s Grande Hotel. Perhaps you even frequented RomWeber’s bygone September sales at its furniture plant in Batesville. Regardless, it’s iconic stuff, and all of it was made at that plant.

Not anymore, though. Nowadays RomWeber furniture is decidedly out of production, while that plant stands as a Batesville-themed reminder that nothing stirs the modern heart quite like an old brick factory.

Nothing, that is, except an old brick factory that’s been repurposed into something else, which is exactly what’s happened here. Indeed the RomWeber furniture plant has become RomWeber Marketplace, and it’s a must-visit destination if you’re looking for outstanding vintage decor.

Built in 1863, the entire facility totals 450,000 square feet. Not all of it is RomWeber Marketplace. (... More on that later.) But what is retains the splendid textures and bones of a century ago. That includes brick walls, hardwood floors, hand-hewn posts and beams, and steel-framed factory windows. It's enough to make lovers of industrial-chic go weak in the knees.

The space, however, is only a backdrop to the Marketplace itself, whose 60 vendors sell everything you can imagine—and many things you can’t. Prior to going there, for example, I did not know I needed a vintage typewriter or a decorative Bengals plate in my life. Now that I’ve returned, they’re all I can think about.

And there’s more where that came from. The vendor stalls feature a cornucopia of knickknacks, bric-a-brac, and kitsch mementos, strewn around like flotsam from an ever-receding (and increasingly nostalgic) twentieth century.

But there are earnest wares here too—antiques, garden accessories, kitchen essentials, pottery, jewelry, clothing, books, and even previously owned RomWeber furniture for sale. In fact there’s so much to browse through at RomWeber Marketplace that browsing becomes an activity in itself, much like wandering around a modern mall but infinitely more interesting.

As noted, the Marketplace accounts for just one area of the former furniture plant. Another has become LEED-certified senior-living apartments. Still another features an event space for weddings and the like. Last but not least is the Big Four Café, which is a fairly perfect next stop if you happen to get hungry shopping.

The cafe is named for the major railroad that once connected Batesville to Cincinnati, Cleveland, St. Louis, and Chicago—the “Big Four.” Originally it stood near the well where the steam-powered engines replenished their water supply. Now it’s just a few steps across the street from the Marketplace.

The interior abounds in tributes to the past. They include the quartered-oak bar, the original cafe doors, and decorative rail posters from the 19th century. Moreover the table tops and wood-paneled walls are remanufactured from floor joists removed during the facility’s restoration.

As for the menu, it features made-to-order dishes focusing on fresh ingredients. Breakfast is especially hearty and includes an array of skillet-style hash plates and one delectable biscuits and gravy Benedict. Lunch continues the trend with cheese steaks, street tacos, and four different pressed sandwiches—Cuban, French roll, classic Italian, and hot pastrami. But the star is the half-pound hamburger made from locally sourced beef and hand-ground daily in-house.

The Big Four Café is open daily from 7 a.m. to 2 p.m. Not only is it a great way to begin or end your trip to RomWeber Marketplace, it’s also a delectable place to go in its own right.