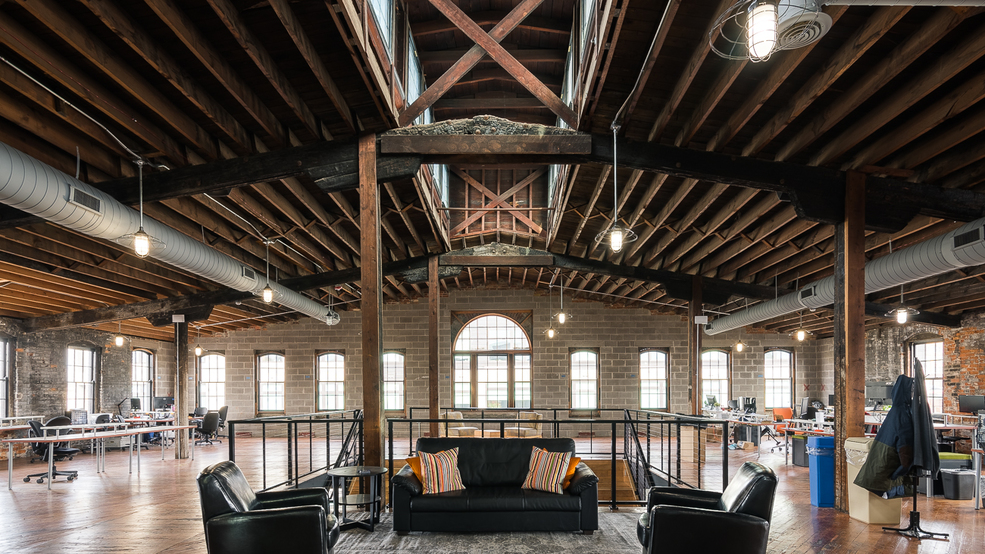 The Road ID office features exposed brick, wooden beams, and the original wooden floors of the over-125-year-old building. A light monitor at the peak of the third floor's pitched roof works in tandem with the many large windows to fill the space with loads of natural light. The design by Hub+Weber Architects, PLC places new meeting rooms and offices inside the old space without blurring the eras together. The seams between the two time periods is intentional and brilliantly pays homage to Covington history without sacrificing modernity. / Image: Phil Armstrong, Cincinnati Refined // Published: 12.27.18
SEE MORE

Road ID Saves Lives From Within an Incredible Covington Office

Do you run? Do you bike? Do you leave the house?

That last one seems silly to even ask, but it proves a point. If you exist within a world of hazards (SPOILER ALERT: you do), Road ID makes an elegantly simple alternative to today's complex technology that'll save you from at least one scary situation: suffering a serious injury and being anonymous to those trying to help you.

Road ID's name cuts straight to the heart of what it actually is—a bracelet you wear that serves as your identification. If you hit a pothole while out for a spin on your Huffy and blast your head, first responders will know who you are and who to contact. If you trip on a curb and badly cut yourself, EMS will know your blood type. If you're rushed to the hospital after suffering a heart attack, they can easily look up the medical history listed on your wrist.

Road ID makes the unpredictable easier to handle. Creator and Road ID co-founder Ed Wimmer understands unpredictability. He dove into the business of making wearable identification without warning. In fact, he almost died before coming up with the concept.

Ed was a senior in college in 1999. With aspirations to run a marathon, he began training. His father warned him of the dangers of running along the road, but Ed dismissed his concerns. After all, he was 21 and about as invincible as any college senior thinks they are.

While out on a run one day, though, a careless truck driver nearly killed him. Ed dove from the path of the truck and into a nearby ditch to avoid being hit.

“From that ditch, I had two very scary realizations. One, I could’ve been hit by that truck, fighting for my life in the hospital. Nobody would know who I was, who to contact. I’d be a John Doe in the hospital," he says. "The other realization I had was that for the first time in my 21 years of life, I would have to admit that my dad was right about something.”

After that, he and his dad came up with the idea for the wearable ID bracelet and began selling them online during a time when eCommerce wasn't entirely mainstream. They operated out of his dad's basement in Ft. Mitchell until the business outgrew the space, and they moved to a small house. After outgrowing that, they moved to a 10,000-square-foot space in Erlanger, then to a warehouse off Mineola Pike that doubled in size.

But the business kept growing. The Road ID culture was strong, and its leadership and employees delighted in positively impacting customers' lives with their bracelets. Their dream of seeing wearable ID become as common as strapping on a seatbelt was slowly shifting nearer into focus. Testimonials poured in, chronicling every close call with some version of "Road ID saved my life" or "Road ID got me to my loved one in time."

After 19 successful years, they knew they needed to start looking for the next space.

They wanted a relationship with a neighborhood. Mineola Pike wasn't conducive to knowing their neighbors, so they found an old building (built in 1892) in Covington and saw potential. The new urban environment lent itself well to getting to know neighbors, too, so they made the move. Plus, it's Covington. Covington is awesome.

“We wanted to get into a more urban environment where we could really feel like part of a community. Philanthropy has always been a core reason for our existence. We’ve always just done check-writing, but we really wanted to see our philanthropy dollars go to work in our own community.”

Designs created by nearby architectural firm Hub + Weber Architects, PLC preserved as much of the character of the original building as it could. Road ID's new space was finally realized in 2018 (check out photos of it in the gallery above).

Now when Ed walks to lunch, he sees faces he knows along the way. The Road ID employees have nearby places to gather after work. Their beautiful, open office space is filled with natural light and places for people to collaborate. They can continue to save lives while working within the built history of the neighborhood they call home.

Road ID seems to be making all the smart moves. Maybe admitting dad was right wasn't such a bad thing after all.

Purchase a Road ID bracelet on their website, or on Amazon.