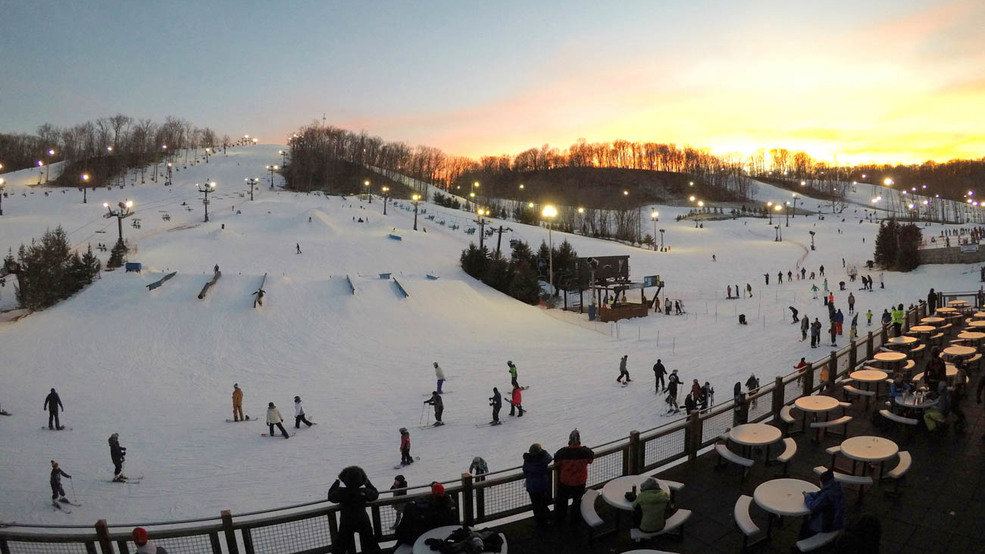 PLACE: Perfect North Slopes / ADDRESS: 19074 Perfect Place Lane, Lawrenceburg, IN (47025) / DISTANCE: 30 miles west of Cincinnati, 40-minute drive / DESCRIPTION: Just 40 minutes from downtown, this ski hill is the closest to Cincinnati. There are 23 trails for skiing/riding, served by five chairlifts and six surface lifts. There are 240 snow guns that can cover the slopes in a foot of snow (if conditions allow) and 250 ski and snowboard instructors to safely turn you into a carving machine. Not ready for the real slopes yet? Check out their snow tubing park with 1,200-foot tube lanes. / Image courtesy of Perfect North Slopes // Published: 1.23.19
SEE MORE

Cincinnatians Don't Have to Cross the Country to Ski Some Slopes

Despite our famous seven hills—several of which even have "mount" in the name—Cincinnati is not located in the Rockies, Alps, or even the White Mountains. Though we may not have the biggest mountains to ski down in the winter, there are several opportunities between Indiana and the Appalachians to get your stoke on. Below is a list of ski resorts, hills, and parks for those who seek the slopes. Each are within a six-hour drive or less.

Just 40 minutes from Downtown, this ski hill is in its 39th season. There are 23 trails for skiing/riding, served by five chairlifts and six surface lifts. There are 240 snow guns that can cover the slopes in a foot of snow (if conditions allow) and 250 ski and snowboard instructors to safely turn you into a carving machine. Not ready for the real slopes yet? Check out their snow tubing park with 1,200-foot tube lanes.

If alpine (downhill) skiing isn’t your thing, head an hour or so north of Dayton to try cross-country skiing. As long as this park in Findlay, OH has a snow base of at least 4-6”, it opens for cross-country skiing as well as snowshoeing. You can rent your gear there and enjoy a wood burning fire and light refreshments after.

Night skiing is an option at many nearby ski hills, including this one in Paoli, Indiana. They have ski sessions on Friday and Saturday nights that last until 1 AM! There are 15 trails, eight lifts, and two terrain parks (beginner and advanced). There are also 10 snow tubing lanes and lessons for kids as young as five.

Ohio’s largest resort is just a two-hour drive away and tops out at 1,460-feet, with a 300-foot vertical drop over 144 skiable acres. 12 lifts serve 20 trails and four terrain parks. There’s live music in the loft every weekend, and family events occur multiple times per season with face painters, appearances by various comic book characters, and animals from the Columbus Zoo.

If you’re willing to drive further for bigger thrills, check out the town of Banner Elk, North Carolina, which is nestled between both Sugar Mountain Resort and Beech Mountain Resort. The resort town offers plenty of upscale lodging, restaurants, breweries, and cideries, and is only four and five miles away from the resorts, respectively. Beech Mountain actually offers the highest slopes on the east coast at an elevation of 5,506 feet while Sugar Mountain is the largest resort in North Carolina, with 125 skiable acres and the only double black diamond (expert) slope in the state. Both offer non-ski activities as well, such as ice skating and tubing.

FOR THE SOCIAL CINCY SKIERS

And if you’re a true big mountain skier, then the Cincinnati Ski Club might be just the support group for which you’ve been searching. They have regular gatherings here in Cincy, but also plan group trips to large resorts in New England and the Rockies.