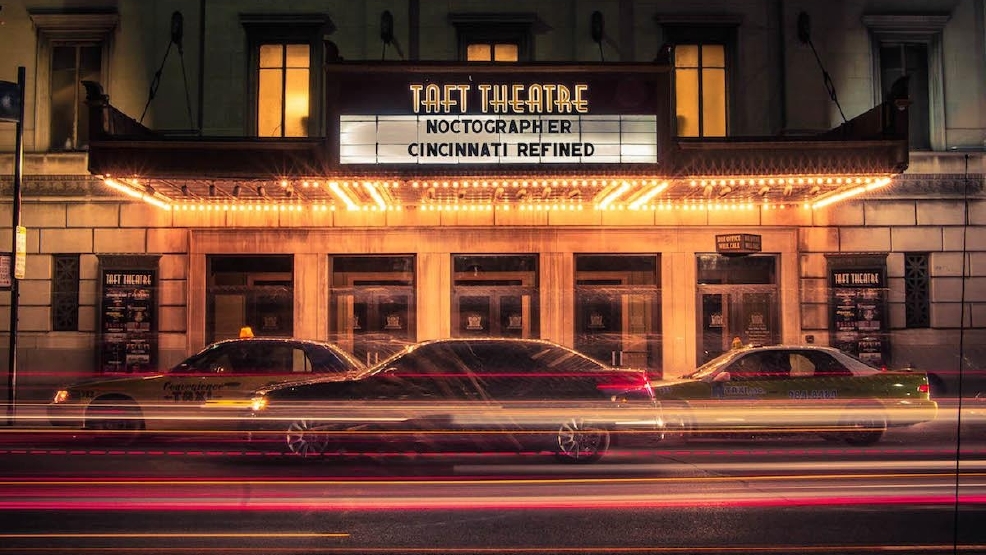 Hijacked. But for a good cause. (Pictured: Taft Theatre / Image courtesy of Keegan Kruse)
SEE MORE

Noctographer Is The Batman of the Art World

When daylight fades and night settles in, most folks retire for the day to prepare for the next. For some, though, night is go-time.

During my time at Campbellsville University, as I honed my photography craft, the night became my canvas. I was caught up in the allure of exploring the ethereal landscape of a world awash in moonlight. Armed with nothing but my tripod and camera, I set out to produce light streaks from cars, showcase the lush tones of buildings cast in streetlight, and capture the visual tempo of a nocturnal world.

Since most humans turn in for the night, my adventures have been solitary. A few months ago, however, I came across a kindred spirit: @noctographer. His Instagram portfolio showcased a unique blend of street photography, light painting, performance art, & urban exploration. Photos of masked figures hanging upside down from bridges, light-streaks racing down desolate streets after dark, and cityscapes ablaze with Tron-esque light.

I wanted to learn more about this nightcrawler, study his work, and explore his domain with my own lens. Ready to shine a light on a unique artist? Here we go.

Cincinnati Refined: Who is the Noctographer & what's his mission?

Keegan Kruse: The Noctographer is a night-dwelling creative thinker, an artist in the shadows, but most importantly, he is an explorer. His mission is to capture images after dark that amaze, confuse, and inspire his audience. But it's mostly for his own personal pleasure.

He finds satisfaction in the exploration, discovery, and adrenaline. He sheds a new and vibrant light upon dark environments. He aims to satisfy others as he satisfies himself. That sounded weird, didn't it? (laughs)

CR: Keegan Kruse, your daytime persona What's that guy like?

Kruse: I'm a jack-of-all-trades looking to master at least one. How I would describe myself at this point in my life is a creator. I'm just now succeeding in making creativity a career, and I'm figuring out how to harness it as best as possible.

I graduated from the University of Louisville last year with a Major in Art and a minor in Communication, and am currently the full-time photographer for Cafepress Inc. Throughout my life, I've experimented with a lot of different creative and expressive outlets. Until about a year ago, I was fully dedicated to using my graphic design skills to make a living. After finding a passion for photography, I've had to rethink that decision. I also am the guitarist and one of the vocalists for a new band that I have a lot of faith in, The Caimans.

Right now, photography and music take up all of my time. I'm either taking or editing photos at work, doing the same thing outside of work, or composing new songs with the band. It keeps me busy, but it keeps me happy. I've found a new home in Louisville, but the love for my original Cincinnati home is always with me, and I make sure to visit often.

CR: When did you become interested in exploring the night?

Kruse: I became interested in exploring the night basically when my parents let me stay out past the streetlights. My friends and I would explore different parts of the Tri-state on our bikes and the nighttime was always filled with adventures. Once I decided to pursue my creativity as a career, I realized that the night had always been an inspiration for me. I picked up photography in college and with my camera, I discovered the rich tones, crisp shadows, and interesting people that came with urban environments after dark.

People would always tell me that nothing good happens after midnight. That was probably good advice for me as a kid. But now, I couldn't disagree more.

CR: Why the masks?

Kruse: They give a certain mystery to a shot. ... In a way, it's like cheating to reach a powerful gaze on a figure. Some of my masks immediately evoke a certain emotion, while some leave it up to the viewer. It just depends on what I'm going for.

CR: I love the fact that you have a crew that helps you orchestrate your works of art. Who are they and what are the strangest things you've had them do?

Kruse: My main crew is made up of some of my best friends that I met in college. Shayan Danyal, Jake Ford, and Dominique McQuarter. I once had Shayan hold my arms and dangle my body off of a ledge so that Jake could use my body as a ladder to climb up. That was pretty odd. But mostly I just have them looking like they're tripping real hard -- dancing around the night with glow sticks, lights, and masks.

I tell them to look "gestural" and "expressive." (I find vague directions like that get the smoothest shots.) Normally, I couldn't really tell anyone to do that, but it's for the sake of art. They not only understand that, but support me too. My friends aren't really surprised with the wacky things I ask them to do anymore. Without them, I wouldn't be able to do some of the intricate shots I enjoy composing. So thanks, guys!

CR: How would someone get into nighttime photography? What's the learning curve?

Kruse: Buy a DSLR camera, doesn't have to be top of the line, just something that has manual mode. The learning curve is steep. It's drastically different from using a camera during the day. I find there are a lot more options for the photo to come out in different ways. I learn something new every time I go out.

Night shooting forces you to look at light in a different way. It's more like painting, dodging, and burning with the light; rather than just finding a good balance of shadows during the day. So it may take a few trial and error adventures where you have to take 30 minutes to get one shot. But give it a few months and you'll get that same shot in two minutes. If you have a good understanding of your camera settings, it just takes practice.

CR: You've got a successful career and a huge following on Instagram. What's next?

Kruse: When I created my account, I told myself if I hit 1,000 followers I would try to get some of my night photography in a gallery. That happened a lot sooner than I expected.

So the next step is concepting my work into the spectrum of fine art, rather than just focusing on experimentation and getting likes on Instagram (which I really only use as a tool for networking and feedback on experimentation). In all of my creative venues, I've been drawn to abstraction and color. My next project will most likely parallel those interests.

Want to learn more about Keegan Kruse or see more examples of his work?