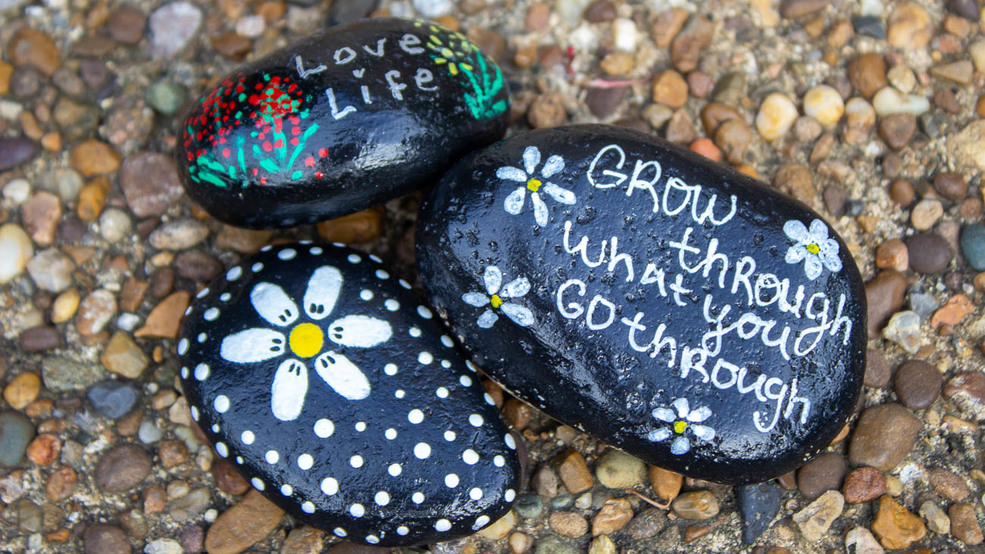 The NKY Hidden Rocks Facebook page started in 2017 by founder Jo Price Craven to combat negativity she was seeing online. The concept is to design a rock with inspiring words or images, hide it in the community, and brighten someone’s day when they find it. They can then keep the rock, re-hide it, or replace it with one of their own to keep the positive, traveling rocks in circulation. / Image: Katie Robinson, Cincinnati Refined // Published: 8.17.19
SEE MORE

How One Local Group Is Combating Negativity By Painting & Hiding Rocks

There’s nothing more fun than a good old fashioned scavenger hunt. The thrill of following clues to search for and collect the coveted prize is so enjoyable. Coming across the treasure at random can be just as exciting, too. But if you thought searching for gems couldn’t get any better, you must not know about NKY Hidden Rocks.

The members of the local Facebook group aren’t just scattering painted rocks along scenic pathways and outside businesses throughout the region for stone-seekers to find; they’re spreading positivity with each one they leave.

A ROCK GROUP IS FORMED

Jo Price Craven started the group in 2017 with Patrick, her husband, to combat negativity she was seeing on social media. She saw a national news story about the concept of painting rocks with words or images of inspiration and then hiding them for people to find and re-hide called the Kindness Rock Project. She decided to give it a try.

She set out by painting three rocks: the Florence Y’all Water Tower, a butterfly for the arboretum, and an airplane for the airport viewing area. Next, she posted clues about their whereabouts on different neighborhood pages in Boone County, which is where she’s from. It wasn’t long until the trend became contagious, people got hooked, and more and more rocks received paint jobs.

The group was originally named Boone County Hidden Rocks and was later changed to NKY Hidden Rocks to incorporate more neighborhoods. But the hiding places aren't exclusive to Kentucky; it extends to the whole Tri-state and beyond. Rocks have been discovered here and hidden in other states, even traveling to other countries by way of visitors who are familiar with the concept. The NKY crew is made up of over 26,000 members and growing.

“There really aren’t any rules, other than just be kind,” says Jo when it comes to the guidelines of the group.

Jo requests that people keep their designs PG because it’s an activity for people of all ages. You don’t have to be a professional artist by any means to take part. Many just do it as a fun, relaxing hobby. The painters have noted how therapeutic it can be to put the phone down, find the perfect stone canvas, and bring it to life with an uplifting message or maybe a favorite TV character.

She also suggests covering your completed work of art with a sealant to protect the design from outdoor elements. Some leave their signature on them for people to know who made it, but members are also encouraged (but, again, no hard rules here) to reference the NKY Hidden Rocks Facebook page on the back of the rock to lead people to the site.

When it comes to hiding them, Jo reminds people to be safe about it and place them in areas they can be easily retrieved, like out of the way of lawnmowers and other dangerous machinery. There’s a page on the Facebook group with tips on where to hide them.

People go about finding them in different ways. They either keep it, hide one of their own in its place, or re-hide the one they found somewhere else. As long as there are rocks in circulation, the group is satisfied. Some local businesses also let NKY Hidden Rocks set up a stand where people can trade rocks or find new ones for those who may have limited mobility or can’t go out to collect them for themselves.

She’s heard some amazing stories of people who had been going through a tough time or had received horrible news when they came across a rock that turned their entire day around. One member’s father had Alzheimer’s and found one during a walk they were taking together, which inspired him to start painting them himself. Other group members found out and stepped up to paint rocks to hide along his regular path so he could find even more.

The group is all about creating a connection with a simple gesture through a shared interest, but they’re also philanthropic with their mission. They partner with non-profits in the community when hosting events, and raise money for different causes by auctioning off items. A few organizations they’ve worked with are the Children’s Home of Northern Kentucky, Stray Animal Adoption Program (SAAP), and Vivian’s Victory—a group that supports families who have a child with an illness or disability financially and emotionally.

If you do end up joining the group, keep a lookout for Cluesday Tuesday: the day people hide their rocks the most, posting clues to the page to hint at their hiding spots...

Join the NKY Hidden Rocks Facebook group, and check out the photos above to get some inspiration from rocks other people in the group have created.