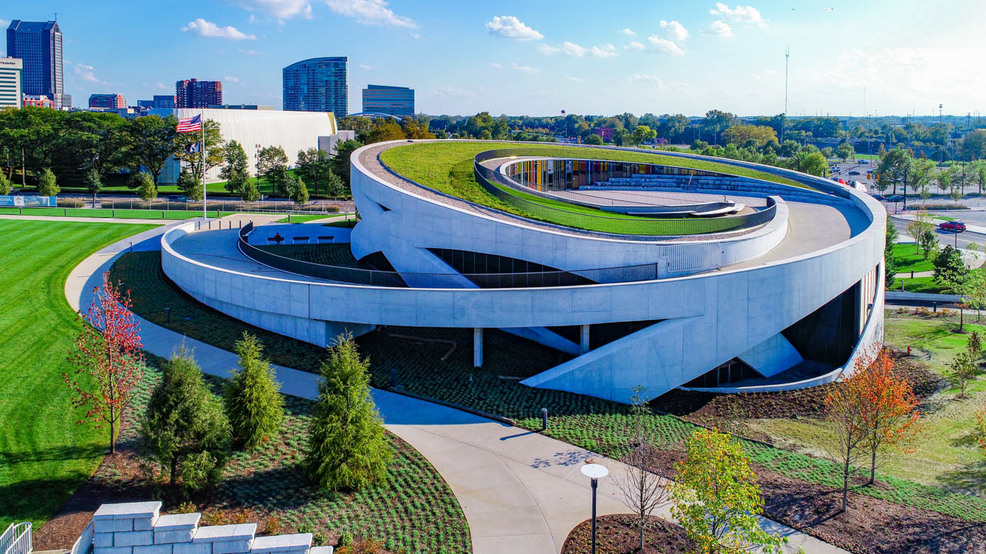 What makes the National Veterans Memorial and Museum so special isn’t just the fact that they exhibit men and women who have served for the United States, but in how they chose to display them. The creators of the museum looked for both history lessons to share with visitors and authentic narratives of the lives of people before, during, and after serving in wars from all branches of the military. The museum is the first of its kind in the country to focus on the shared experience of storytelling when it comes to learning about U.S. veterans. It is about a two-hour drive from Cincinnati. ADDRESS: 300 West Broad Street, Columbus, OH (43215) / Image: Aerial Impact Solutions, via the National Veterans Memorial and Museum // Published: 11.11.18
SEE MORE

The National Veterans Memorial Is Also an Architectural Treasure

Those boots have marched through time by some 40 million veterans since the nation’s founding. Now, they are honored with the recently opened National Veteran’s Memorial and Museum (NVMM) in Columbus, an instantly-iconic architectural landmark that will serve as a living tribute to our nation’s vets.

“We think that there are a lot of great things to do in Columbus,” said Amy Taylor, Chief Operating Officer of the Columbus Downtown Development Corporation. “But this one is really a gem in our cultural landscape.”

The building, which opened in October, is the first and only museum in the nation dedicated to honoring veterans. The 53,000-square-foot facility tells individual stories and shared experiences of veterans throughout history. A 2.5-acre memorial grove offers a place for public ceremonies and individual, private reflections.

Veterans’ stories are presented with interactive exhibits, multi-media presentations, photos, letters, and personal effects. Starting in 1775, a timeline keeps visitors attuned to the historical context as the individual stories of veterans plays out through various U.S. wars and conflicts.

After a nationwide call for stories from veterans, the NVMM shot hundreds of hours of video before boiling those down to quick, digestible vignettes about 25 different veterans. Hundreds of other veteran’s stories are told through images, text, and artifacts. A ‘Share Your Story’ section allows anyone that cares to record their thoughts for the museum to keep in its collection.

The late Senator (and retired U.S. Marine Corps pilot) John Glenn had the initial vision for the memorial. Glenn was the Founding Chairman of the Veterans Advisory Committee and understood the value of preserving the history and stories of our nation’s veterans. Construction took nearly three years and consumed 28 million pounds of concrete, 1,100 tons of steel ‘rebar,’ 500 tons of structural steel, and 7,000 cubic yards of topsoil.

The design prompted Architectural Digest to hail it as, “One of the Most Anticipated Buildings of 2018.”

“We want people to leave inspired,” adds Taylor. “That inspiration can run the gamut from wanting to join the military, to wanting to do more to support veterans, to just realizing that we are a great society because of the sacrifices of so many of our citizens that joined and served.”

The National Veterans Memorial and Museum is located at 300 West Broad Street, Columbus, OH (43215). The center is open Wednesday through Sunday 10 AM-5 PM.