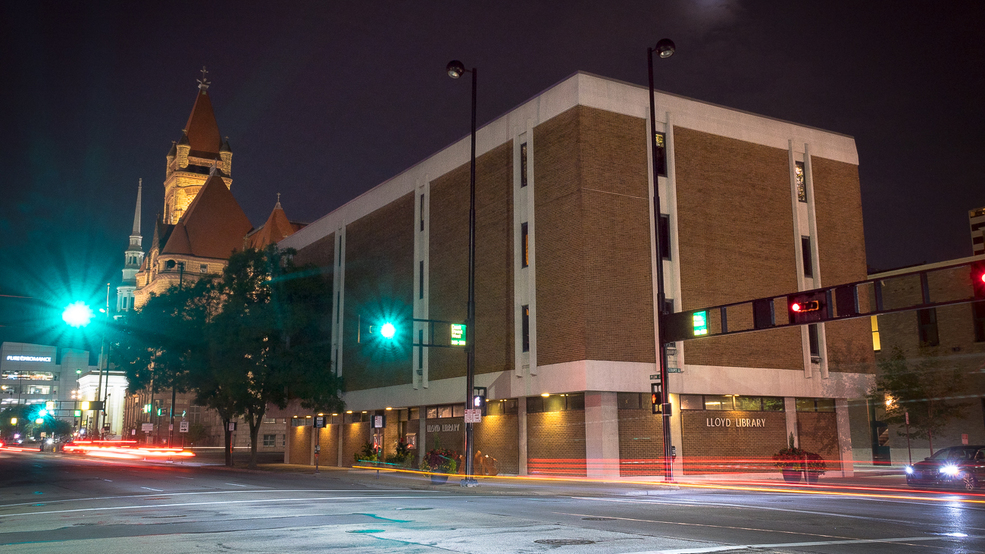 The Lloyd Library is reportedly the world's largest collection of research materials and artifacts relating to pharmacognosy. Researchers from across the globe seek out the resources offered by the Lloyd. The collection spans 600 years of work, from old books to brand new periodicals. Much of the Lloyd brothers' own work, including inventions and medicine bottles, are displayed throughout the library. The Lloyd Library is both a repository for scientific research materials and a museum dedicated to local history. ADDRESS: 917 Plum Street (45202) / Image: Phil Armstrong, Cincinnati Refined // Published: 8.21.18
SEE MORE

There's a nearly-150-year-old library and museum in the middle of Downtown that boasts an extensive collection of information surrounding plant-based medicine, otherwise known as pharmacognosy. The Lloyd Library, located just steps from City Hall, is not only a mecca for researchers within the field, but also the gathering place for artists and gardeners who have an interest in botany and the natural world.

Actually, I didn't really do that point justice. Let me rephrase: it's not just an extensive collection–it's the largest resource of its kind in the entire world. As in, all of Earth. Located right here in Cincinnati.

Even if you're not a scientist, that's pretty impressive.

Despite its reputation, you may never have heard of it. Not everyone has an interest in plants and medicine outside of applying aloe to a sunburn. Perhaps the real reason it often flies under the radar, though, is because of how it looks from the outside. The building itself doesn't demand the attention of passersby. In fact, the library's physical form is so muted and unremarkable, it's more of a lesson on how a 19th century Richardsonian Romanesque City Hall next door can overwhelmingly camouflage the aesthetic of 1970s construction.

It's more or less just a box with a couple of windows. But, as we're often taught, looks aren't everything. It's what's inside that matters. And whats inside dates back over 600 years. We'll get to that shortly.

The Lloyd Library began in the 1870s within the same corner it currently sits. Brothers John Uri, Nelson Ashley, and Curtis Gates Lloyd were all trained pharmacists and ran their own pharmacy and manufacturing company across the street.

John was the oldest. He was responsible for developing the products, machinery, and patents bearing the Lloyd name.

Nelson loved baseball and funded the construction of the Cincinnati Reds' first ballpark, the Palace of the Fans.

Curtis was adventurous and traveled the world, collecting many of the books and artifacts that currently reside in the library's collection still to this day.

The brothers' interest in "eclectic medicine"–now called pharmacognosy–subsequently made their library a repository for all things plant-based medicine. They outgrew their space over the years, and long after they'd passed, their collection was moved to the current-day building at the corner of Court and Plum.

The Lloyd's collection of books and artifacts spans hundreds of years. The oldest piece in the collection, an Italian book from 1493, was brought back to Cincinnati by Curtis at some point during his travels. But not all of the library's collection is from Renaissance Europe. The Lloyd receives new pieces all the time. You don't know what you'll find unless you ask.

"The Lloyd Library is a place that people have come to for more than a hundred years to find information on plants with medicinal uses. We have books that go back to the 1400s, continue through the present day, and really cover every aspect of botany you'd be interested in." Executive director Patricia Van Skaik says.

The Lloyd's priority is making research possible, but it's also partially a museum dedicated to eclectic medicine, the Lloyd brothers, and the history of the organization. Periodicals and books line several shelves next to an exhibit dedicated to a Lloyd invention and George Rieveschl, the local inventor of Benadryl who passed away in 2007. This intentional juxtaposition of research materials and exhibited artifacts spanning the breadth of related fields is found throughout the library.

You don't have to be an ethnobotanist or a pharmacist to appreciate any of it, either. Even for an itchy hiker who consistently can't remember what poison ivy looks like at the Cincinnati Nature Center, the Lloyd Library remains a fascinating window into a world of science that's married to our local history.