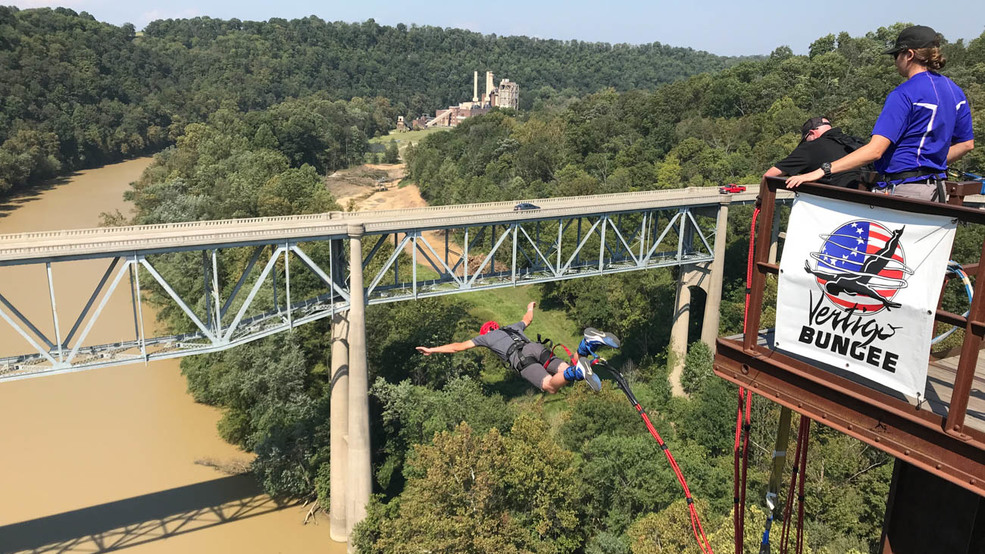 Bungee jumping is held on the Young’s High Bridge, an old railroad bridge over the Kentucky River that's adjacent to the Wild Turkey bourbon distillery. One weekend a month, from May to October, Vertigo Bungee hosts jump sessions from the bridge, attracting people from all around the Northeast, Southeast, and Midwest. / Image courtesy of Lawrenceburg/ Anderson County Tourism Commission // Published: 4.9.19
SEE MORE

You’ve heard of Lawrenceburg, IN (shout-out to Perfect North), but there’s another Lawrenceburg that should also be on your radar, too. Lawrenceburg, KY is a charming, historic city that was incorporated in 1820 and has been a gathering spot for outdoor fun and festive celebrations ever since. The best part is—it’s less than a two-hour drive from Cincinnati.

The bourbon distilleries in Lawrenceburg bring in tens of thousands of tourists annually to enjoy the world-renowned spirits. Both Four Roses and Wild Turkey are part of the Kentucky Bourbon Trail and Lawrenceburg, being in the hub of the trail, is in the perfect base camp for bourbon trail travelers who also want to visit other distilleries along the Kentucky Bourbon Trail.

Wild Turkey is one of two distilleries in Lawrenceburg that survived Prohibition. The “Buddha of Bourbon,” Jimmy Russel, is the master distiller there, and has been for 60 years. He’s one of the most famous distillers alive today, but you can still typically find him socializing with guests in the visitor center’s lobby.

This bourbon distillery has also stood the test of time since its opening in the late 1880s. The structures at Four Roses were all constructed in a Spanish architectural style, which is a sight many bourbon-seeking visitors don’t normally expect to find in the Kentucky countryside, but one that is certainly worth seeing.

For anyone who prefers a different kind of barrel-aged drink, they will find some great wine varieties at Rising Sons and Lovers Leap vineyards. The two picturesque wineries feature tours and tastings amongst beautiful Kentucky backdrops.

If you’re more interested in spirits that are seen and not consumed, you can visit a guided walking tour in the fall that highlights areas of downtown Lawrenceburg that are said to have had some spooky encounters from former residents.

Lawrenceburg, KY might be a small town, but they go big when it comes to having a good time.

Yes, there’s bungee jumping here. Vertigo Bungee Jumping hosts the plunging thrill ride off of Young’s High Bridge, an old railroad bridge over the Kentucky River adjacent to the Wild Turkey bourbon distillery. You can book a session one weekend a month between May and October.

This isn’t just cruisin’ through some back roads. The Wheels of Time car club put on the event on the second Friday of every month from April-October. They block off downtown streets to display club members’ vintage rides and socialize amongst fellow car-lovers.

The first weekend in June is your chance to meet Bigfoot in Lawrenceburg. Okay—that’s not a guarantee, but it is when the Wildman Days street festival is put on, which celebrates Anderson County’s reputation of having the most Bigfoot sightings than any other Kentucky county. Though Bigfoot is the event’s focus, it is an event with something for everyone to enjoy, such as food and craft vendors, live music, and even contests like best beard, biggest foot, and a Bigfoot calling competition.

In case you don’t know, Burgoo is a spicy, Kentucky-famous stew. An annual festival full of the brewed stew, music, and camaraderie takes over downtown during the last weekend of September.

The Lawrenceburg Fair and Horse Show, Civil War reenactments, summer concerts, and plenty of downtown shopping and dining also make the cut for things to enjoy while visiting Lawrenceburg.

With access to the Kentucky River and Salt River, along with scenic land and lakes in Anderson County, you have great options for enjoying some Kentucky nature.

It's perfect for small boats, paddleboards, or canoes for a quiet day out on the water. You can also fish from the banks where there are no launch fees.

Made from the Salt River, you’ll find all sorts of fish here, including bluegill, catfish, crappie, and three varieties of bass just to name a few.

If bagging a big whitetail or turkey is more your speed, the area offers that, too. At Salt River Outfitters, you can go hunting and then hangout at the lodge and play games, shoot 3D targets, and stay the night if you'd like.

If you’re interested in staying somewhere local that isn’t a chain hotel or Airbnb in town, consider these spots:

These luxury suites are located in downtown Lawrenceburg on the second floor of a historic building that also houses Bluegrass Sabor, a full-service restaurant and bar. Each room has a furnished kitchen, Wi-Fi & cable, and easy access to downtown shops and restaurants.

The beautifully-restored house will make you feel right at home, featuring three guest rooms, including two extra spacious king suites. You’ll forget all about their free Wi-Fi while enjoying a wine and cheese social hour, home-baked desserts each evening, and a three-course gourmet breakfast in the morning.

You can see more of what Lawrenceburg has to offer in the gallery above, or on its website and Facebook.