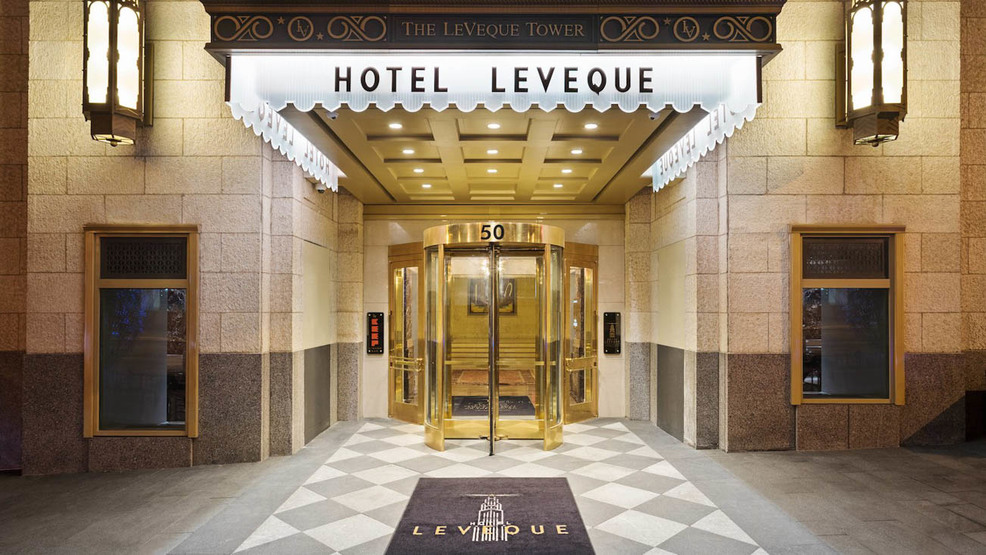 The building where Hotel Leveque resides has a history lasting over 90 years. It has been an insurance building, former hotels, and even a tower landmark used by airline pilots. In 2017, it opened its hospitable doors to travelers as Hotel Leveque, featuring 149 guest rooms, six luxury suites, apartments, and offices. ADDRESS: 50 West Broad Street, Columbus, OH (43215) / Image courtesy of Leveque Hotel // Published: 11.25.18
SEE MORE

Traveling to Columbus? Stay at This Unbelievably Gorgeous Hotel

When it was once the tallest building between New York City and Chicago, LeVeque Tower in Columbus was used by pilots as a landmark in their flights. Today, it’s been reborn as The Hotel LeVeque and serves as a beacon of hospitality to travelers.

It was home to the Deshler Wallick Hotel and later became known as the Lincoln LeVeque Tower, then simply the LeVeque Tower after its purchase in 1945.

Clad in unique glazed terra cotta relief tiles, the tower’s art deco architecture and imposing size makes it the most recognizable structure in the city’s skyline. The Hotel LeVeque opened in 2017 with 149 guest rooms and six luxury suites. Apartments and offices occupy the rest of the building.

After the six-year long restoration process, Architectural Digest magazine dubbed it, "The most beautiful hotel in Ohio".

The interior continues the Art Deco style, but based around a celestial theme. The light fixtures, including the lobby’s dramatic chandelier, references stars and constellations. The rooms all have small telescopes that guests can use to stargaze (or survey the view of the Scioto riverfront). Projectors in the rooms create a delightful planetarium effect on the ceiling.

The hotel is part of Marriott’s boutique Autograph Collection. This national group of smaller hotels steers clear of standard, cookie-cutter hotel décor and emphasizes unique design elements reflective of the property’s history. Marriott likes to say that these hotels are "Exactly Like Nothing Else," and that’s certainly true of the Hotel LeVeque.

A local fashion designer was tapped to create the unique hotel uniforms, while artwork, toiletries, and scented candles in the hotel are all from local artisans. Their on-site restaurant, The Keep, uses local ingredients in its signature fare and classic cocktails.

The hotel offers a "Holiday Lights & Shopping Package" November through January, and it does fill up quickly over big event weekends (like The Ohio State University football games).