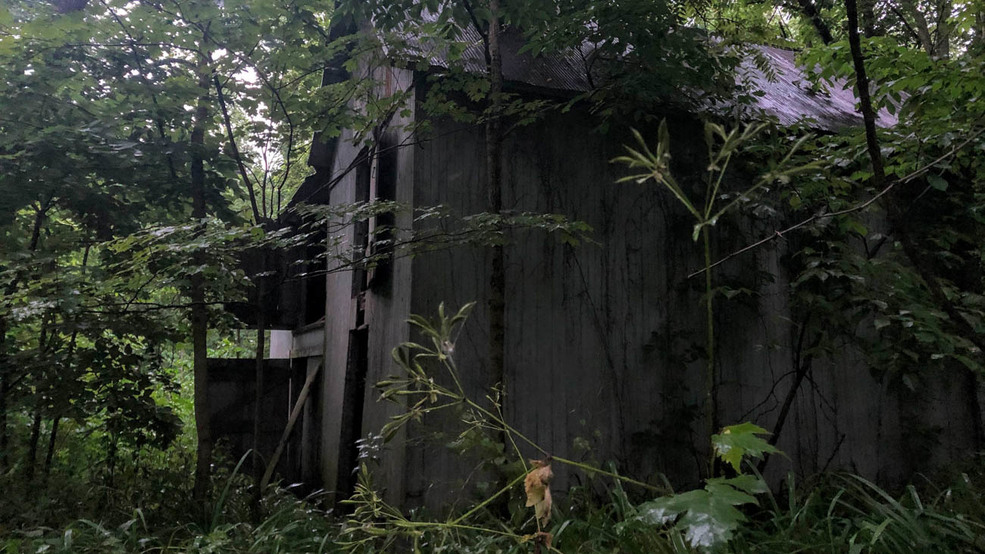 PLACE: Woods Outside of London, OH / The woods where Old Xenia and Roberts Mill Roads meet is supposedly haunted by the family killed there during the early 1800s. The entrance to the woods is easy to find, but the thick trees and the path is overgrown, making it a little tough to find the decaying barn. This spot gets a 10/10 on the Spookiness Scale because it prompted the rain to fall when we asked for a ghostly interaction, a shaky feeling while walking, and the sight of a shadowy figure leaving the barn during our visit. Witnessing a cat thrashing around in a seizure on the drive back only added to the spooky score. It’s around an hour and a half from Cincinnati for those brave enough to investigate. / Image: Di Minardi // Published: 7.23.19
SEE MORE

We Visited 3 Reportedly Haunted Places, and the Last One Was the Creepiest

Whether or not you believe in ghosts, there are a fair number of spooky places to visit within a couple hours' drive of Cincinnati. Looking to find some ghosts myself, I visited three reportedly haunted places: an old tower platform, a lonely road, and an abandoned barn.

Though my experience with each was different, the last leg of my trip proved the scariest. As I shouted “Hey! Any ghosts here!?", I waited to see what would happen.

I was able to access the Patterson Tower platform in the Hills and Dales Metropark outside the City of Dayton Golf Course, but the tower door was cemented shut and all the windows were barred.

In 1967, a teenager named Peggy Harmeson was killed on the tower’s metal stairs when it was struck by lightning. Legend has it that during storms her ghost can still be seen today, but all I found was dilapidated stone. Still, the thought of peeking through the barred windows did give me a minor case of the heebie-jeebies, so I give Patterson Tower a 3/10 on my Spookiness Scale™. With cars driving by on the street and a nearby hiker ranting about his home reno gone wrong, I just didn’t feel Peggy’s ethereal presence. Visiting alone in the dark at 2 AM might be a different story, though. (Cincinnati Refined doesn’t promote trespassing—the park closes at 10 PM, people.)

WHERE: Along the Richardson Forest Preserve off of W Kemper Road
DRIVE: Less than 30 minutes northwest of Cincinnati

Lick Road dead-ends into a forest preserve where people go to spot the ghost of Amy. The details are fuzzy, but as the legend goes, she was allegedly murdered by her boyfriend/killed by her stepfather/found dead there. If you park your car and flash your lights, honk your horn, and wait in the dark, you’ll supposedly spot her ghost and hear her scream. You may even see the words help me written in condensation on your windows.

Got all that? Clearly, paranormal enthusiasts can't agree on a single story. I tried all of the above, but nothing happened. I still give Lick Road a 5/10 on the Spookiness Scale because I was a little worried about being murdered there (by a human) and thought the black cat running across the road on our way in was a nice touch.

WOODS OUTSIDE OF LONDON, OHIO

WHERE: The woods at the corner of Old Xenia and Roberts Mill Roads
DRIVE: Around an hour and a half northeast of Cincinnati

The patch of woods where Old Xenia and Roberts Mill Roads meet is supposedly haunted by a family killed there during the rough and tumble outlaw years of the early 1800s. The entrance to the woods was easy to find, but the trees were thick and the path was overgrown, so we initially missed the decaying barn. When we turned around and began to make our way toward it, things began to get a little strange...

I asked the ghosts to come out, and the sprinkling rain came down harder in response. My legs got a light and shaky feeling (that I’ve only felt once before on a strenuous trek in Colombia) and I stumbled against the trees twice. When I took a photo of the barn’s interior, a shadowy creature slid out of the window and down the side to get away.

So, I was already feeling pretty uneasy when I turned off Roberts Mill Road and came across a black cat in the throes of a violent seizure. I was too late to help, but right on time for it to take a part of my soul when it shuffled off this mortal coil. The Haunted Woods are therefore confirmed a 10/10 on the Spookiness Scale, and I’m 10/10 completely sure that I’m never going back again.

Check out the photo gallery above to get a peek at the spooky places for yourself...