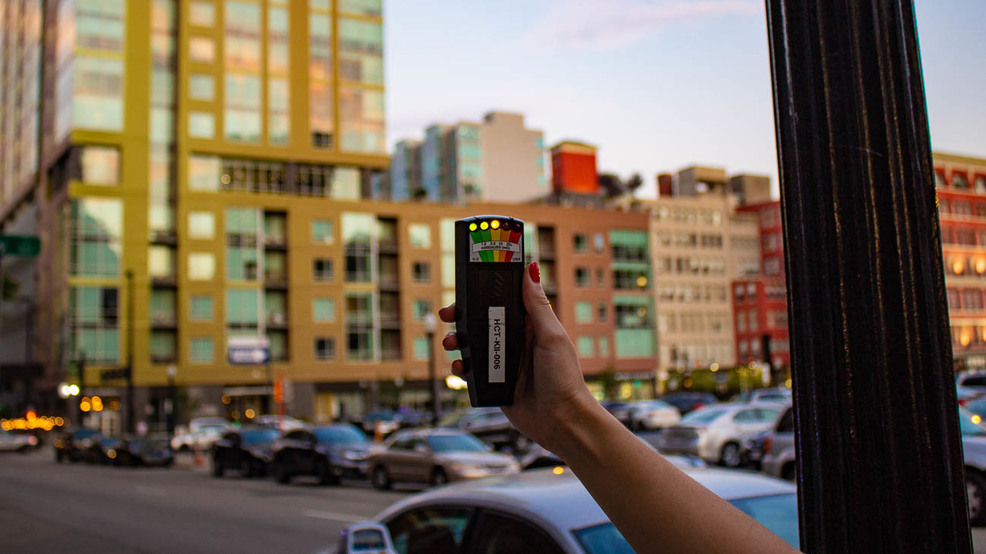 The tour provides ghost-hunting gear like EMF meters that would turn red when we were within three to four feet of energies emitted by electrically charged sources. Some paranormal investigators consider the device to be a helpful tool in detecting unseen forces surrounding you. Ours lit up red a handful of times along our walk through the city, and we were often unable to recreate the occurrence that triggered it to go off. / Image: Katie Robinson, Cincinnati Refined // Published: 10.5.19
SEE MORE

Now that it’s officially #SpookySzn, what better way to get into the spirit of Halloween than with a ghost hunt through the city?

Haunted Cincinnati Tours offers guided outings where you can learn more about Cincinnati’s past and discover parts of the city that you may have never noticed before, including settings of alleged ghost-sightings. Dan Smith, the Director of Operations, says the group has been escorting curious phantom fans around local neighborhoods for over 10 years now.

There are four different tours to pick from, each taking place predominately outdoors on evenings in April through early November. Each tour lasts around two hours, and tickets cost $24.95 per person with private ones available for groups, as well.

Their most popular tours include Buried Secrets, which takes you around Washington Park, Memorial Hall, and Music Hall, and Eerie Encounters, which is the one I was invited to partake in to see what these excursions were all about.

The tour began with everyone meeting by the Abraham Lincoln statue in Lytle Park at 6:30 PM. Michael (Mike) Sullivan was our personable tour guide who led us from the Park up through the Central Business District, making informative stops along the way to fill us in on historic factoids and legends of paranormal occurrences.

He painted a picture of what Cincinnati was like over the past 200 years, covering prohibition, fatal neighborhood riots, and brutal woes of war. With the visual aid of his iPad, Mike was able to paint the image even clearer with his gallery of dated photos to reference some of the bits of history he was discussing.

Mike also equipped us with EMF meters that would turn red when we were within three to four feet of energies emitted by electrically charged sources. Some paranormal investigators consider the device to be a helpful tool in detecting unseen forces surrounding you. Ours lit up red a handful of times along our walk. What was most peculiar was that each time it went off, we were unable to recreate the occurrence when we returned it to the spot it was triggered...

We eventually made a stop at Arnold’s Bar—the oldest continually operating bar in Cincinnati, dating back to 1861. Mike briefed us on the bar and grill’s storied past and claims of ghost sightings patrons and employees alike have attributed over the years. One included the story of a former worker at the restaurant who passed away a few years ago. Some people believe they've still seen him rushing in past them through the front door.

We entered the bar to have a look around, and as we were ascending the steps to the second floor, I looked up and made eye contact with someone peering around the door frame who fit the description of the deceased employee our guide had just shown us a picture of. He was even wearing a similar hat to the man in the photo. We searched all around for the peeking man at the top of the steps, but couldn’t find him anywhere. I’m not ruling out the possibility of the individual being a diner or staff member, but it definitely left me uneasy when we couldn’t seem to locate him...

The tour came to an end outside the Taft Museum of Art, which is also home to a lengthy history with its fair share of ghost stories. Mike showed us pictures of supernatural-looking figures that people from past outings have caught on camera, most of which were captured in a dimly lit Lytle Park, which neighbors the museum, and eerie photos taken in the driveway next to the Taft.

And aside from evening tours, Haunted Cincinnati Tours also offers overnight stays in a variety of spooky, historic locations throughout the year. These groups are much smaller, meeting up around 8 PM and putting their paranormal investigative tools to good use throughout the night until 3 or 4 AM. Sites include the Old Licking County Jail, Ohio State Reformatory, Poasttown Elementary School in Middletown, Rohs Opera House in Cynthiana, KY, and more.

Every participant has their own experience on these guided outings, of course. But if nothing else, a trip with this local crew makes for a great adventure where you can expect to learn something new about Cincinnati and the mysteries it holds.

Book your own tour or overnight stay by visiting Haunted Cincinnati Tour’s website—you have until November 9th of this year for tours. And give them a follow on Facebook, too.