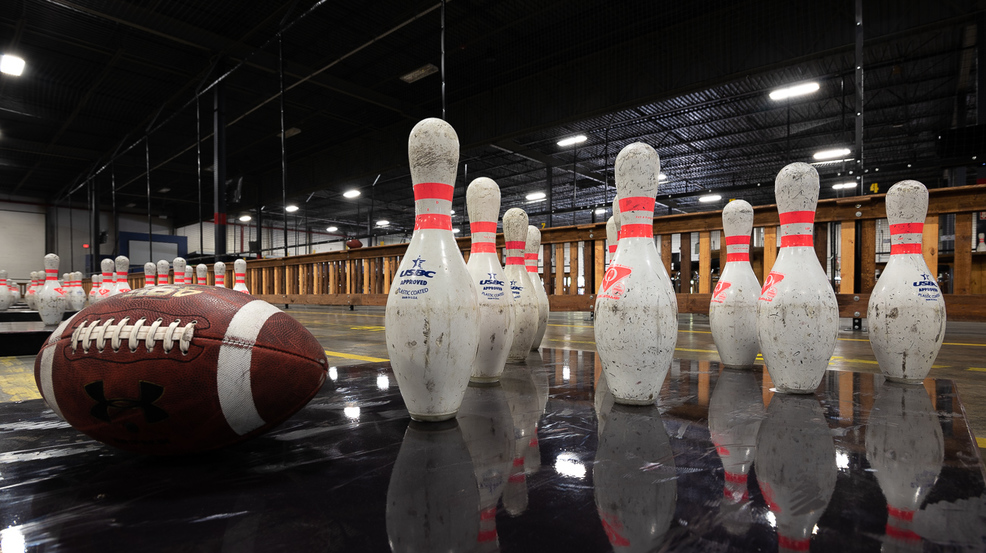 The Fowling Warehouse is a 47,000-square-foot facility in Pleasant Ridge that houses 30 "fowling" lanes. Fowling is a sport that involves using a football to knock over bowling pins. The game is said to have originated in Detroit. Owner Joe Frank brought it to Cincinnati after seeing fowling's success in Detroit and Grand Rapids. ADDRESS: 2940 Highland Avenue (45212) / Image: Phil Armstrong, Cincinnati Refined // Published: 5.1.19
SEE MORE

Fowling, a Detroit-bred game that uses a football to knock down bowling pins, is expanding to Cincinnati with the opening of the 47,000-square-foot Fowling Warehouse on May 3rd.

The Warehouse has 30 fowling lanes available (15 for walk-ins and 15 for reservations). The rules are relatively simple: You stand about 40-feet away from the pins and throw a regulation football to knock pins down. The first one to knock all their pins down wins.

Owner Joe Frank advises, “You don’t want a nice, tight spiral. You want more of a lobbing, wobbling ‘duck’ sort of throw to really knock the pins around.”

Frank notes that it’s quite a bit harder to knock pins down with a football. The challenge is evident in the lack of strikes.

“I’ve been playing for seven years and I have had one strike. One,” adds Frank. “It’s really hard to do.”

It all started in 1999 when a Detroit man made an ambitious attempt to set up a bowling lane while tailgating at the Indianapolis 500. Chris Hutt bowled his first ball and then realized that he had nobackstop. The renegade bowling ball almost hit several people, so he immediately stopped. Later, his friends started throwing around a football and fowling was quickly born. 15 years later, Hutt opened the first Fowling Warehouse in Detroit, then a franchise opened in Grand Rapids. The Cincinnati location followed.

Luckily, Hutt’s best friend lives right next door to Frank. Their own one-on-one games eventually became an annual tournament of 60 teams and more than 200 attendees.

"We were having so much fun that I began to dream of opening another Fowling Warehouse," says Frank, formerly from the corporate world before opening the Fowling Warehouse. "I almost can't believe that it's happening now."

Athe Warehouse, it costs $10 to play the open lanes as long as you like (assuming you keep winning). Reserved lanes are $120 per hour for up to 10 people per lane. Their bar serves beer on tap and in cans, wine, and mixed drinks. They plan to have food trucks outside the space, as well.