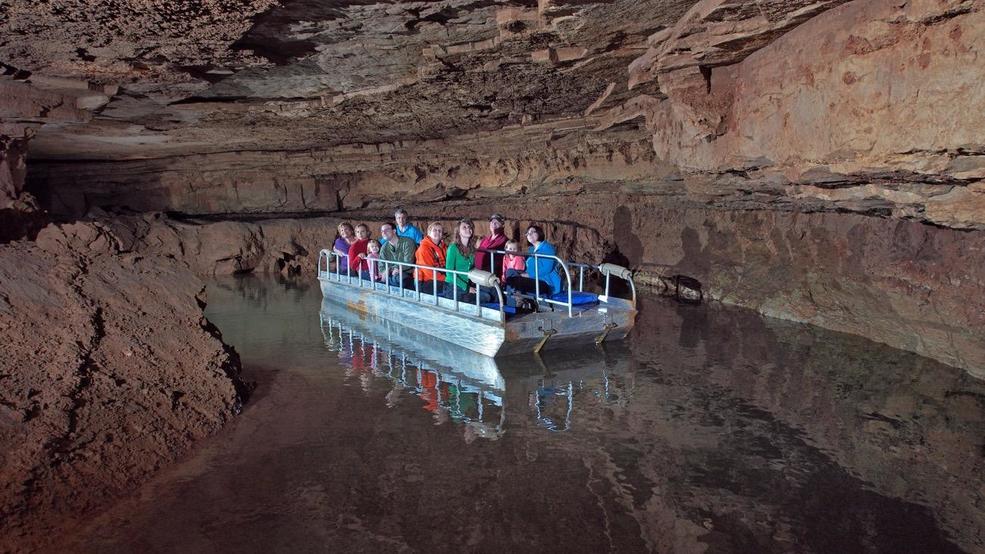 By the time speleologists are finished exploring the Brinkey Cave system at Indiana Caverns, it could be one of the largest cave systems in the country. Travel to Harrison County, Indiana to explore it and several other astounding caves today! It's roughly two hours from Cincinnati. / Image courtesy of Harrison County Tourism // Published: 4.16.19
SEE MORE

Indiana Caverns is located within the Brinkey Cave. At 42.57 miles long, it's the seventh-largest cavern in the United States, and speleologists keep finding new places to explore. By the time that exploration is complete—it began in 2009—they think it could be more than 100 miles long.

You can explore the cave, too. And you should, whether you’re a cavern novice or a seasoned spelunker. The kayak and walking tours offer a marvelous peek into an otherworldly warren, with stalagmites (floor), stalactites (ceiling), draperies, rimstone dams, helictites, and cave coral millions of years in the making. There are also bones from Ice Age animals in addition to a fascinating array of biodiversity alive in the present.

To top it off, Indiana Caverns happens to be more than an hour closer than Mammoth Cave, making it a more manageable day trip for that same sense of underground wonder.

Brinkey Cave isn’t the only cave to explore in the area. Owing to its unique geology, southern Indiana abounds in spelunkable recesses.

Squire Boone Caverns should be your next stop. Discovered in 1790 by Daniel Boone and his brother, Squire, the caverns sport the country’s largest rimstone dam. Like Brinkey Cave, it continues to grow as speleologists explore new passageways. Most recently, a new entrance to the cave was opened in 2017, exposing formations that had been hidden for millennia.

Hour-long tours guide you through them. But there’s just as much to do at the surface. Experience Squire Boone Caverns Zipline Adventures, featuring more than 10,000 feet of line. Dip candles, mine gemstones, or sample candy in the Pioneer Village. You can also see how corn was once ground into cornmeal and grits at the restored Boone Mill, originally constructed in 1809.

Marengo Cave is hailed as “the most profusely decorated cavern.” A U.S. National Landmark, Marengo Cave runs deep and beautiful, with iridescent surfaces and undulating calcite formations. The Crystal Palace Tour and Dripstone Trail tour offer unique experiences. You can enjoy them both, then relax in a nearby cabin or RV and tent camping area, complete with fire pits, electric hookups, picnic tables, bathhouse, pavilion, and playground.

Last but not least is Wyandotte Cave at O’Bannon Woods State Park. Native Americans mined flint in the cave potentially as far back as 8,000 B.C., and you can see evidence of their activities today. The Little Wyandotte Tour and Big Wyandotte Tour present alternatively “easy” and “rugged” options, so you can enjoy the cave system whether you’re with small children, grandparents, or all by yourself!

Just remember, all caves remain around 54 degrees year round, so you’d be smart to pack a pullover and wear comfortable shoes. It’s a great way to beat the summer heat.

Visit thisisindiana.org for more information on Harrison County’s caves and more things to do in Southern Indiana.