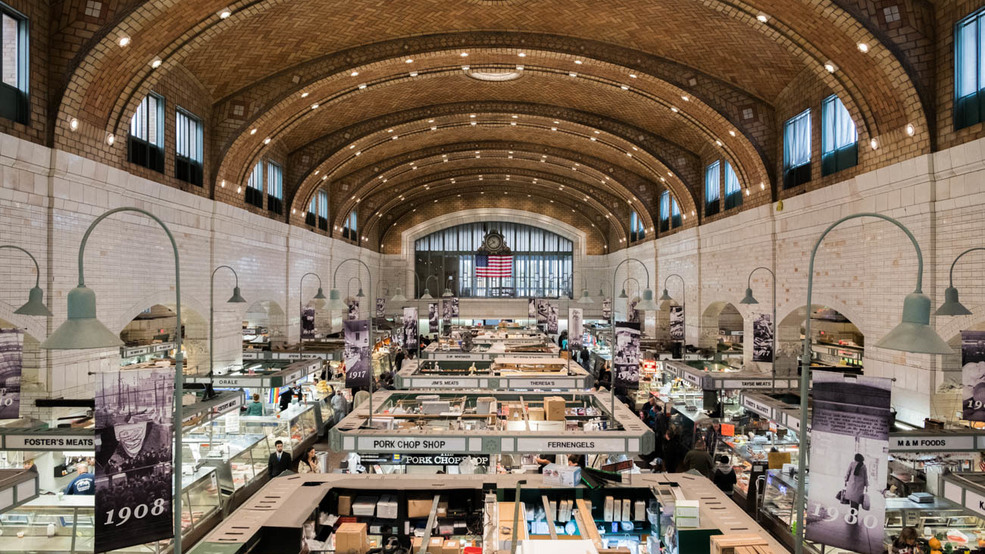 PLACE: The West Side Market / ADDRESS: 1979 W 25th Street, Cleveland, OH (44113) / DISTANCE: 61 miles from Grandpa’s Cheesebarn and Sweeties Chocolates / DESCRIPTION: The West Side Market—with more than 100 vendors—is the last stop on your food-focused road trip through the state. Since opening in 1840, the historic market has everything from fresh produce to fresh pierogies and everything in between. / Image: Lance Anderson via Unsplash // Published: 1.31.19
SEE MORE

Eat Your Way Through Ohio on This 300 Mile Road Trip

One of the best parts of traveling is the food. Now’s the perfect time to hit the road to see what tasty treats you can find along the way. More specifically, you should take a road trip to these seven offbeat and all-around exceptional food destinations in Ohio. From Downtown Cincinnati to the West Side Market in Cleveland, this food lover’s road trip through the Buckeye State takes approximately five hours to drive across 286 miles.

Let's begin at our first stop...

Any Cincy local knows that Jungle Jim’s isn’t just the best grocery store in the city—it’s the best in the state. What originally began as a produce market now features products and foods from around the world. Grab a pint from the craft beer bar and spend some time browsing exotic spices, snacks, and specialties in this 300,000-square-foot space.

This tiny Miamisburg institution was originally opened to feed workers cleaning up after the Great Flood of 1913. It continues to serve out of it century-old wagon frame. Here, the mini patties come topped with pickles and onions only. There’s no new-fangled truffle aioli (or even cheese for that matter) but sometimes simple is best. Even better? These burgers only cost $1.25 each.

The Food Network named the Pine Club a top five steakhouse in the US and the New York Times Style Magazine calls it one of the World’s Greatest Old Dining Institutions. Fortunately, the steaks live up to the accolades. The menu and ambiance have remained unchanged since The Pine Club opened in 1947, which means this supper club is cash only—and still refuses to serve desserts.

After a steak dinner, grab a drink at the Century Bar. And by drink, I definitely mean bourbon. This bar was built in 1862 and offers its patrons one of the most extensive bourbon and whiskey selections out of their cherry and stained glass back bar.

Turtle soup was popular in the early days of America, but now the Old Mohawk is one of only a few places left in Ohio where you can try it. For those unsure about the dish, their manager reports that “some of it taste like pork, some of it tastes like chicken.” If you’re still hungry after a bowl, walk down the street for a half-pound Jumbo Cream Puff from Schmidt’s.

When it comes to free samples, grandpa knows best. My dad swears he ate more than 60 last time he visited! After you try all the cheese, jams, honey, salsas, dips, pickles, and more on display, head across the parking lot to Sweeties Jumbo Chocolates—slightly smaller barn—for dessert.

The West Side Market

End your food-focused road trip from Cincinnati at the West Side Market in Cleveland. Opened in 1840, it now has over 100 vendors packed into the historic building. Whether you want fresh produce and traditional pierogies, or bison meat and liquid nitrogen ice cream, the West Side Market has you covered.

Take a look through the gallery above when your gas tank is full and your belly is empty!