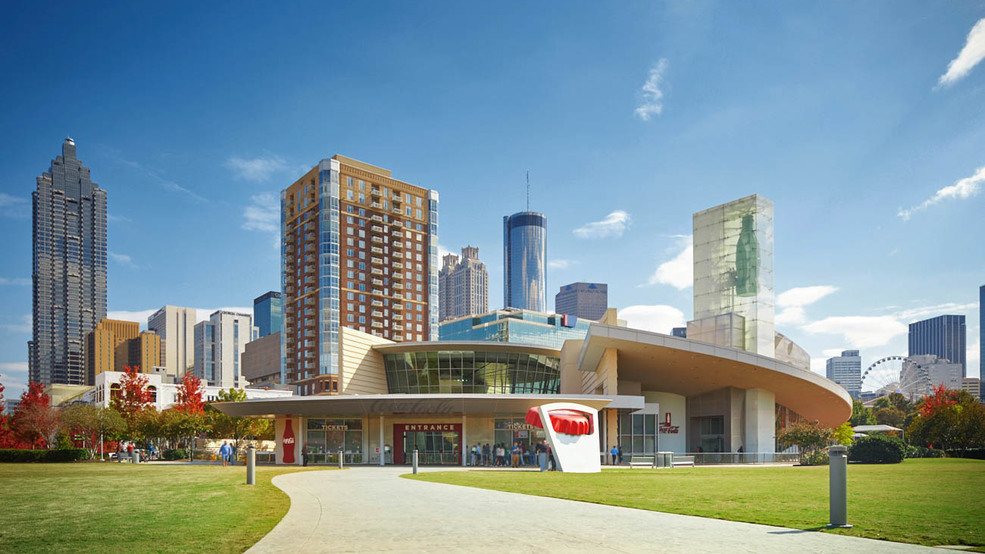 Atlanta is a gorgeous city offering historic site-seeing, tasty cuisine and breweries, scenic experiences, and plenty of entertainment. And Frontier Airlines is offering plenty of inexpensive ways to get you there with their seasonal route to Atlanta beginning April 30th. Some round-trip tickets only cost around $76 depending on the days you’re flying. / Image courtesy of World of Coca-Cola // Published: 4.3.19
SEE MORE

The Frontier Airlines' seasonal route from CVG to Atlanta begins on April 30th, so snatch up this deal while it’s hot. Round trip flights from CVG range from $76 to $136 depending on the dates you choose.

Some of Atlanta’s most popular tourist attractions are the World of Coca-Cola, CNN Studio Tours, the Georgia State Capitol building, and the 30-acre Atlanta Botanical Garden. You’ll also have your pick of a vast array of museums, from the College Football Hall of Fame to the family-friendly Center for Puppetry Arts, and everything in between.

Ride the SkyView Atlanta—a 20-story-high Ferris wheel—for a bird’s eye view of the city. Walk or bike the Atlanta BeltLine for some fresh air and street art, keeping an extra sharp eye out for two unique pieces from Tiny Doors ATL. Finally, end your night with a concert by the Grammy Award-winning Atlanta Symphony Orchestra at Atlanta Symphony Hall.

Nature lovers in Atlanta can also spend a day hiking on the Appalachian Trail. Springer Mountain, the starting point of the 2,190-mile cross-country trek, is only a two-hour drive from the city.

For a quick trip, downtown Atlanta has the most central location, but if you’re looking for a little more personality and charm, stay in Inman Park or Old Fourth Ward.

Inman Park has trendy boutiques, coffee shops, and murals lining the streets. A walk through this neighborhood will uncover live music, markets, and Victorian homes around every corner. Next door, Old Fourth Ward is known as a major player in Atlanta’s food scene. It's home to some of the city’s most important history as well, considering Martin Luther King Jr. grew up there in the Sweet Auburn Historic District.

Atlanta is a regular on the foodie round-ups in top publications, recently ranking #9 on Zagat’s list of most exciting food cities, and #5 on Southern Living’s list of best food cities in the South.

The best way to get a true taste of Atlanta is with a “meat-and-three.” Choose your protein, like fried chicken or BBQ ribs, combine it with three classic sides like mac n’ cheese or collard greens, and enjoy! Some of the top spots for meat-and-three in Atlanta are Matthew’s Cafeteria, the Busy Bee Cafe, and Mary Mac’s Tea Room. After you eat, polish off your meal with a refreshing ice pop from King of Pops (or start your happy hour early with a Poptail—you’re on vacation after all).

Speaking of drinks, half of Georgia’s breweries are located in Atlanta. SweetWater is one of the biggest and most well-known, while Atlanta Brewing Company, founded in 1993, is the oldest in the city. Rooftop bars like 9 Mile Station at Ponce City Market also dot the city and are the perfect place to round out your Cincinnati escape with craft beer, cocktails, and sunset views of the Atlanta skyline.

You can start booking your trip today directly from Frontier Airlines’ website.