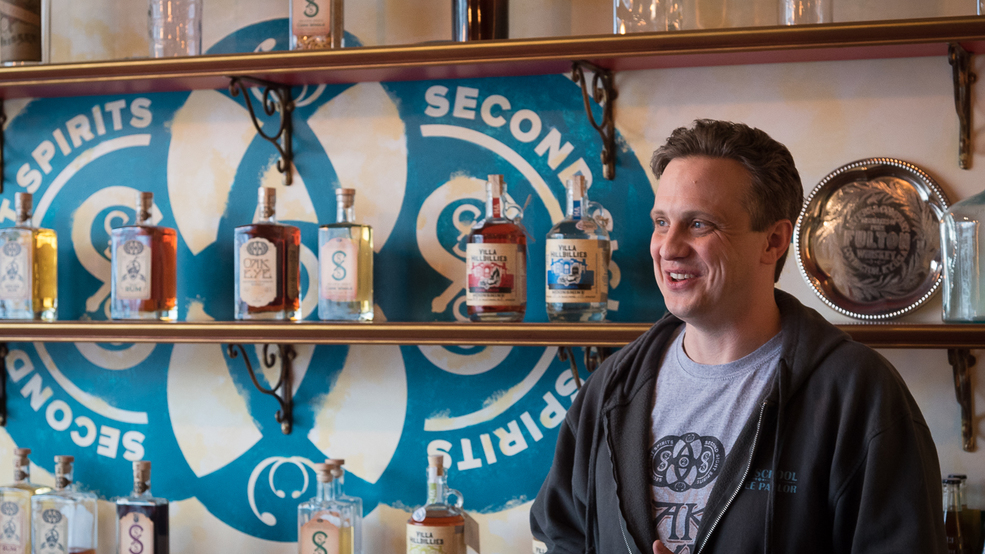 We talk a lot about beer here at Cincinnati Refined (because, duh, why wouldn't we?), but let's switch gears for a moment and talk about an entirely different subject: whiskey. And not just any old whiskey. Let's talk about bourbon.

Bourbon is whiskey made primarily from corn. Kentucky is best known for it around these parts. Since there's a bevy of bourbon brewing around Northern Kentucky at the moment, organized tours have begun ushering spirit-sippers and joyful drunkards to local distilleries and bourbon bars. Cincy Brew Bus, best known for its beer and wine tours, has a dynamite distillery tour of its own.

Our tour began at New Riff Distilling in Newport. There, the group was led by Rachel Moore, who explained the history of the brand, the process of making spirits, and how to properly taste everything when samples were given.

After being guided through the facility and wetting our whistle with a little of New Riff's Kentucky Wild Gin and others, everyone piled onto the bus to head to the next venue: The Littlefield.

A bourbon bar in Northside, The Littlefield offered a flight of three different tastings (you'll have to take the tour to discover which ones). Owner John Ford gave background on each bourbon to add flavor to the experience. The tour also included a $5 voucher to spend on additional drinks or food if riders desired.

After leaving Northside, we found ourselves en route to Ludlow, Kentucky where we arrived at Second Sight Spirits. The supremely charismatic Carus Waggoner, one half of the duo who started the distillery, regaled everyone with riveting tales of working in Vegas showbiz before moving to Kentucky to start Second Sight.

Second Sight's rum samples were plentiful in number. And apparently equally as tasty; several riders purchased bottles for later before boarding the bus to head to the last stop on the tour.

We then bussed back over the river to Wiseguy Lounge in Over-the-Rhine. Resident bourbon baron Mike McLaren confidently threw down several bottles of booze on the table and gave background on each one. He then poured each rider several glasses of the day's amber infusion. The generous pours ended our bourbon bonanza on a particularly spirited note.

To say Cincy Brew Bus' Bourbon and Distillery Tasting Tour was both educational and inebriating would be an understatement. If you like bourbon, whiskey, rum, and/or gin in your glass, and you have an interest in its creation, you'll love this tour.

The Cincy Brew Bus Bourbon and Distillery Tour also visits other locations not listed above. You can read more about the tour, as well as the post-tour hotel deal it offers, by visiting its website.