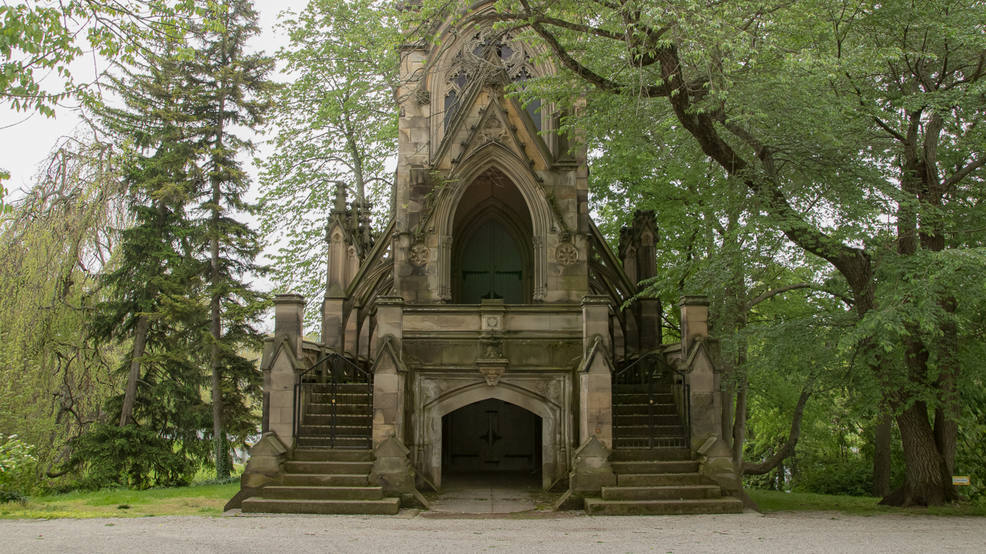 The Spring Grove Cemetery hunt is their most popular one, sending you on a quest through and around its gorgeous sculptural headstones, winding roads, lakes, massive trees, and mausoleums to learn not only the identity of the richest Cincinnatian who ever lived, but also what he did with all his millions. "Kids love the idea of traipsing around spooky old graves and adults are astounded by the beauty of the grounds and the stunning monuments," Dorsey says. / Image: Elizabeth A. Lowry // Published: 9.21.19
SEE MORE

Mystery, History, and Adventure Await You on a Cincinnati Treasure Hunt

I bet you didn't know that Cincinnati is the birthplace of one of the most well-known compositions in American musical history. I'm also guessing you aren't 100 percent sure who the richest Cincinnatian who ever lived was. How about that secret chamber at the Cincinnati Art Museum; do you know its location?

Learn all these answers and much, much more when you book a scavenger hunt-style tour with Cincinnati Treasure Hunts. This one-of-a-kind adventure will also teach you about local history and ask you to visit parts of the city you may have never noticed before, all while solving riddles along the way to the "treasure"—the answer to the mystery theme of your hunt.

Professor Arthur S. Hunt III and Joseph, his assistant and nephew, are the brains behind the hunts. To create a course, they start at the end and work their way back to a convenient starting point. They then fill in the blanks between the two points, connecting them with a series of stops along the way. There are typically about 15-20 stops for any given hunt.

Joseph explains, "For example, the Downtown Hunt starts off by asking, 'Think you know the most famous name in the music and entertainment industry to ever come out of Cincinnati? We bet you don’t!’ To this day, even five years later, not one person has guessed the answer ahead of time correctly."

When Professor Hunt and Joseph create the hunts, they create the clues in a rhyme to get you from one stop to the next. At each stop, a clue will reveal your challenge, such as solving a trivia quiz, answering a multiple-choice question, or participating in an "I-spy" game.

"The quiz always keys off something at the stop," Joseph says. "But, we never tell you where to go directly [and] the clues to do so are always in a rhyming riddle form. Coming up with all these stops [and] quizzes, plus making everything rhyme, can easily make writing a new hunt take three months."

Begin a hunt by checking out their website to choose from six different adventures, which take place in Eden Park, Spring Grove Cemetery, Downtown, the Cincinnati Art Museum, Over-the-Rhine, and Mt. Adams.

From there, you'll book your self-guided hunt, reserve a time slot (hunts are run every 30 minutes to avoid running into other scavengers), and pay a $20 fee.

The day of the hunt, you'll get an email three hours before your reserved time that contains a link to launch your hunt. You can forward the link to others in your group (up to seven people) so that everyone can follow along on their smartphones.

Then, it’s time to get hunting! There may not be any buried treasure at the end, but after you solve the series of riddles, you’ll be rewarded with the answer to the budding mystery presented at the very beginning of the excursion.

To get in on the action, visit Cincinnati Treasure Hunt’s website and schedule your hunt.